June 7, 2012
Ronald Reagan won the Cold War by following his instincts and ignoring a lot of bad advice from establishment Republicans in and out of his administration. A new book just released tells the amazing story of Jeane Kirkpatrick, a onetime liberal Democrat whose intellectual honesty and probing mind led her to the inner circles of the Reagan foreign policy strategists. This gifted, insightful woman's role in what became the "Reagan Doctrine" is explored in Peter Collier's "Political Woman: the Big Little Life of Jeane Kirkpatrick. 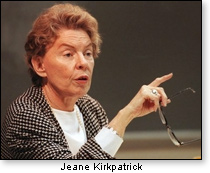 The book provides a perfect focal point for a review of the lead-up to the Cold War. Ms. Kirkpatrick's input to the Reagan policy was one of several, and Mr. Collier provides us with fresh information.

Before the Cold War fades too far into our past, we might benefit from a review of that half-century nightmare now that our defeated enemies have since regrouped under terrorist coalitions that include jihadists.

Even much of the mainstream media will acknowledge — sometimes in a backhanded way — President Reagan's role in bringing down the Soviet Union. What is not known to younger Americans — or even to older citizens who grew up with classroom distortions or were not taught any American History, to speak of — is that Reagan and his allies (here and abroad) were up against decades of propaganda advanced by powerful forces (some well-meaning, others not).

At least two 20th century generations were largely influenced by a one-sided set of conventional wisdoms that dominated public discourse.

With that in mind, the following background:

In the Post World War II years, Americans were understandably war-weary. That many facets of the pre-war Depression-era New Deal had begun to lose their appeal was evident in the overwhelming vote in 1946 for a conservative Congress. It would have been gratifying, of course, had we then lived "happily ever after." But as always, that hoped-for scenario is confined to fairy tales.

In this instance, several factors got in the way.

We soon realized that while we had defeated an evil man in Germany (Hitler), we had helped make the world safe for another evil man (Stalin). Americans began to ask if and when our fighting men would be required to "put on their uniforms again."

On Capitol Hill, Senator Robert A. Taft (R-Ohio.) was alarmed. He knew that the warfare state (whatever its cause) would serve to strengthen the welfare state, and thus create a never-ending growth of government, complete with its inherent threat to fundamental freedoms.

The United Nations was created — concomitant with an almost Pravda-like barrage of sanctimony whereby Americans were lectured that hopefully we had "learned our lesson," that we could have prevented World War II if we had only joined the League of Nations after World War I, and that we dared not repeat the "mistake" of "withdrawing from the world," lest we are called again to "bear arms."

Unraveling all the premises in that cliché-filled nonsense would require a book — not a mere column. In shorthand: World War I was a ridiculous war into which we were lured by the deceit of Woodrow Wilson and others. It ultimately toppled four empires only to replace them with successors that were demonstrably worse.

Americans then concluded, in retrospect, that pulling the British Empire's chestnuts out of the fire did not justify our involvement in World War I. We refused to join the League, largely out of concern for its potential infringement on our sovereignty.

The Versailles Treaty — engineered largely by Wilson — planted the seeds of World War II and provided an opening for the rise of Adolph Hitler. Tyrants with evil intent usually require talking points.

In 1945, having fought in two world wars (the second a direct result of the avoidable first), we were hectored to clean up the mess by joining the League's successor, the United Nations. which for decades has bilked our taxpayers, coddled our enemies, and routinely infringed on or attempted to disrupt our sovereignty (and by the way, we did "bear arms" in several wars, advanced by Communist and terrorist enemies, including some who have occupied respected positions at the UN).

The notion that conservatism, for all intents and purposes, did not exist in Post World War II America was summed up in 1950 by Lionel Trilling, the famous literary critic and professor, who wrote: "In the United States at this time, liberalism is not only the dominant but even the sole intellectual tradition."

Trilling, a controversial figure in his time, merely reflected the perception of a smothering monopoly of liberal internationalism that — with few exceptions — dominated the ideas marketplace. Though Trilling himself was critical of communism, many of his liberal contemporaries were anti-anti-communists, believing that any criticism of home-bound communists served only as fodder for the "reactionary right," and undermined an establishment vision of "one world." 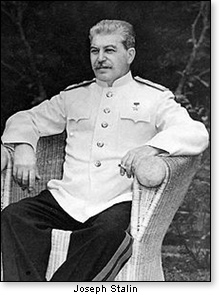 At war's end, Communist Party USA membership was at its highest level, having prospered in the New Deal era's "united front" during the Great Depression and then during the war when — after at first collaborating with Hitler — Stalin became America's ally only because he was left with no choice.

Outright Communists and their fellow travelers infiltrated government (349 that were known at one count), theatre, movies, music, broadcasting, academia — every avenue of public influence. They were aided by the anti-anti-communists (mentioned above) who ran interference for them.

The consensus was shattered just as the liberal "establishment" thought the Goldwater defeat of 1964 had left it with permanent intellectual and political victory.

The violent protests — fomented by the anti-war left, the new forces of "political correctness," and some fringe elements of the civil rights movement — had caused much of Middle America to re-evaluate the way in which the world should be viewed.

This is the world that greeted Ronald Reagan and those on his team who were with him intellectually (of whom Jeane Kirkpatrick was one). The former California governor had entered the White House with the goal in mind of bringing down the Soviet Union. Notwithstanding some popular revulsion to the exotic extremes of the sixties, some of the old Post World War II conventional wisdoms remained as never-to-be-challenged fact in many influential quarters.

The question then was: How were the new White House arrivals to go against that wind and overcome the moral equivalence widely accorded a mortal enemy whose ultimate goal was nothing short of world domination?

Space requires that we take a second column to finish this brief summation of the story, which resulted in victory over the Soviets, as the fight continues against terrorists and contemporary UN threats to U.S. sovereignty and security, including today's Law of the Sea treaty (rejected by Reagan and roundly denounced more recently prior to her death by Jeane Kirkpatrick).

We will explore the book Political Woman.