Michael Savage is not the only writer to conclude this nation is more divided now that at any time since the Civil War. However, the author/radio talk-show host has explored in-depth America's step-by-step removal from the ideal of "one nation, indivisible." 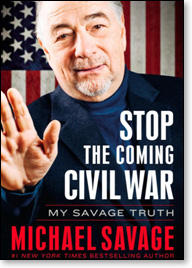 If one adds up many factors outlined in Savage's latest and powerful book, it would likely follow that a second civil war would be more dangerous than the first. Our population has increased tenfold since Lincoln's time, and modern weaponry is far more destructive. A shooting war on our soil (God forbid) would likely yield more lost lives than the 600,000 sacrificed in the mid-19th century.

"Everything is at stake," the author asserts. One concludes a potential mid-21st century Civil War would even surpass in emotionality the slavery and economic dividers that spurred the mid-19th century conflict.

Writing in "Stop the Coming Civil War: My Savage Truth," he tells us we are peacefully fighting (many of us without knowing it) "the world revolution" which he defines as "the conflict that the current administration is pushing in the name of a broader worldwide liberal revolution" in which "the forces of the left are attempting nothing less than a socialist takeover of the world economy and global politics."

At this point, the reader might ask himself, "Well, haven't we been arguing over 'socialism' since FDR's New Deal, and even before?"

No-no, this isn't just the "socialism" debated at political conventions, the "socialism" cited by dilettantes who go back to their real jobs on Monday morning, the socialism we sometimes defined as "communism on a slow train." What we face now is yesterday's "slow train" at high speed. This is the nightmare writ large, here and now. This is an author trying to shake his countrymen with an urgency of "This is it, wake up!"

Dr. Savage is writing about an administration whose concept of a true revolution is remarkably similar to the old Brezhnev Doctrine; i.e. that once the revolution gains power, its dominance is here to stay. Coincidentally, within days of the release of "Stop the Coming Civil War," a veteran Democratic Party operative intoned on TV that "[Y]ou can elect all the Republicans you want but [Obamacare] is irreversible."

This book's first chapter is headlined "Graduating to Treason?" Obviously there are no dilettantes in this battle, in the author's view.

He writes, "We are under assault from both inside and out as our government moves to consolidate its domestic power, while at the same time weakening our defenses against the growing power of our enemies."

It is not as if an invasion of America materialized overnight. The enemy has been engaged on a "long march" against America's borders, language, and culture; its military; our middle class; health care; civil rights (in the genuine, as opposed to phony sense of the term); science; our schools; and our allies (see Israel, to name one).

This is a war against everyday Americans, with the battle-lines drawn:

The haves against the have-nots. 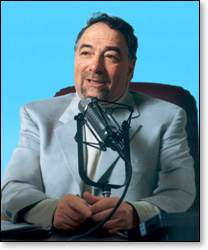 Liberals who hate the Second Amendment versus lawful gun-owners, millions of whom refuse to register their guns and ammunition in anti-gun jurisdictions.

Climate activists whose policies cause forest fires and exacerbate drought against those who understand the effect of human activity on the climate is negligible.

And if that "slow train" is now high-speed, Savage believes the enemy's starting point is/was the nation's schools. Whereas "Stalin had his re-education camps, Obama has the U.S. education system," he charges.

Are we past the proverbial "point of no return?" Dr. Savage opines: "Obama's election to the presidency in 2008 might represent the final nail in the coffin of freedom unless we continue to persevere against the threats we now face."

Though he doesn't trust the "establishment" Republicans (preferring the Tea Party wing), he displays rather pragmatic political instincts. Michael Savage nonetheless sees reason to believe that the two wings of the party are mending fences in time "to develop a majority that can attain the presidency in 2016."

What is most important above all to this author is that "We must have someone in office after 2016 who can and will issue executive orders that will reverse the damage that Obama's executive orders have done."

When writing the book (pre-2014 mid-terms) Savage expressed the hope that the Republicans would take back the Senate and increase their numbers in the House.

That fond wish having since been granted by the voters, it is now on to 2016, and the "Savage Nation" hopes that over time, a future coalition of Republicans and independents can keep America off the left track.