My appearance on the Houston Fox affiliate last week has generated something of a national furor. Entertainment Weekly, the Miami Herald, New York Magazine, the Hollywood Reporter and others have done stories on GLAAD's call for Fox to apologize for even giving me any air to breathe.

GLAAD, which stands for the Gay & Lesbian Alliance Against Defamation, has taken umbrage with me for saying on Fox that homosexual behavior "is conduct that bears enormous psychological and physical risk to those that engage in it" and "is just as risky and just as dangerous as injection drug use."

GLAAD put almost immediate pressure on the Fox affiliate to apologize for giving me any air time at all, being the fans they are of the First Amendment and all, and according to GLAAD, Fox at first said they would. But subsequently, the Fox station has had an apparent change of heart and has yet to issue the promised apology.

Perhaps it's because Fox did some research and found out I was telling the truth.

Here is the information I used on Fox, pulled this very day off the CDC's website (Centers for Disease Control). You will note that these are cumulative figures from the beginning of the epidemic through 2009, the last year for which statistics are available. 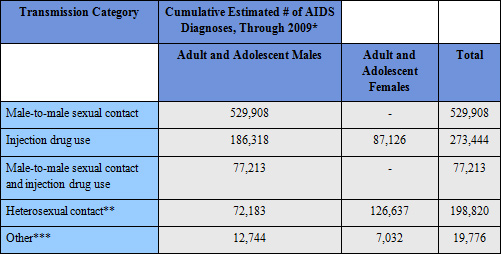 * From the beginning of the epidemic through 2009.

** Heterosexual contact with a person known to have, or to be at high risk for, HIV infection.

*** Includes hemophilia, blood transfusion, perinatal exposure, and risk not reported or not identified.

According to the CDC, which is not, as I pointed out in the debate, a right-wing think tank, a total of 878,366 males have been diagnosed with HIV/AIDS since the epidemic began.

Here is the breakdown by transmission category:

Simple math, not rocket science, indicates that what I said on Fox is exactly right. Over 90% of the males who have been diagnosed with HIV/AIDS since the outbreak of the epidemic contracted the disease through having sex with other males or through injection drug use.

Further, the FDA still will not allow a male to donate blood if he has had sex even one single time with another male since 1977. If you doubt me, you can read it for yourself here.

Quoting the FDA, which, it should be noted once again, is not a right-wing think tank:

"Men who have had sex with other men, at any time since 1977 (the beginning of the AIDS epidemic in the United States) are currently deferred as blood donors. This is because MSM are, as a group, at increased risk for HIV, hepatitis B and certain other infections that can be transmitted by transfusion."

The only other groups who are prohibited as matter of strict policy from donating blood are injection drug users and prostitutes. Once again, the conclusion is inescapable: homosexual behavior is as risky to human health as intravenous drug abuse and street-walking.

Fear of the truth is why GLAAD has launched virtually a nationwide campaign to deprive me of my right to freedom of religion, freedom of speech, and freedom of the press. They don't want my message on the air. They want the message screened out, censored, and banished. And so as always, the very folks who claim they are the paragons of tolerance prove to be the most intolerant folks of all.

In so doing, they have revealed that they detest the First Amendment and the protection it provides for robust public discourse on important social issues.

Why such tyrannical and vitriolic repression? Simple: gay activists can't handle the truth.

February 18, 2021
Environmentalists dont have a climate problem – They have a God problem

January 30, 2021
Diversity is not a strength but a crippling weakness