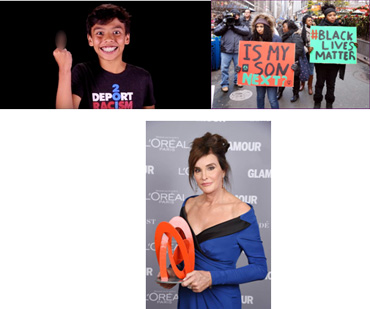 I have long given up the hope of understanding Liberal logic, for what hope can there possibly be when sanity must give way from the very start. Three classic, recent examples of this twisted logic from the Left come gift-wrapped in the form of the Deport Racism PAC and video, the Black Lives Matter movement, and the Glamour Magazine Woman of the Year award to Caitlyn Jenner.

The stated purpose of the Deport Racism PAC and video is to combat anti-Latino racism in the 2016 elections. As a Latino myself, I can assure you that the battle to prove that Latinos can be intelligent, decent, and well-spoken contributors to this society is a daily struggle, which the Left will certainly more vigorously attest to than the Right which it bases as racist at every opportunity. The core of anti-Latino racism portrays all Latinos as vulgar, obnoxious, uneducated, ill-bred, screeching fools like those so unfairly portrayed on television and movies. Certainly any sane, caring, compassionate and, above all, rational effort to combat such racism would do so by presenting Latinos who are precisely the opposite of those vile stereotypes. Given that minimally cerebral assessment of what is needed, the Left decided that spreading a video of clueless Latino brats spewing the worst Spanish vulgarities you can imagine while hugging their grandmother was a good idea. To put a cherry on top of the idiotically counterproductive effort, the particularly obnoxious main child speaker depicted above tells Trump to leave "my country" which, given the fact that Trump was born here, makes no sense at all. The finishing touch came when this very same brat began to lecture Trump on the constitution which, based on my very extensive experience with obnoxious and un-educated people of all backgrounds, that brat has no clue about. Imagine a video protesting prejudice against Irish-Americans which depicts a bunch of Irishmen drinking in a bar and you will have some idea how idiotic this video really is. When many Latinos are embarrassed and disgusted by your video defending Latinos, you have really stepped in it.

The Black Lives matter movement purports to fight the relative lack of respect for the lives of African-Americans in our society in general and in confrontations with law officers in particular. One would imagine, therefore, that this movement is against anything which causes more deaths among the black community than among whites, as would only make sense given its stated mission and outcry. Despite this, this movement seems to have no problem with abortion, which statistics show causes a far greater proportionate harm in the black and general minority community than among whites. How people can scream that black lives matter while allowing abortion to, in the words of the Rev.Clenard H. Childress, be nothing short of a "black genocide" is beyond the scope of rational thought, and shows just how clueless and selective the Left's logic truly can be.

Our final dose of the Left's logic comes in the form of the award recently given to Caitlyn Jenner as "Woman of the Year" by Glamour Magazine. There is no need to debate here whether or not Jenner actually deserved the award since even those defending it admit that there can be considerable debate about that. Certainly one can respect the position of the widower of a policewoman killed on 9/11 who had won the award at that time who, upon learning that this year's award for courage was given to Jenner, made the decision to return his late wife's award, arguing that there were many far more deserving women. One need only recall the outrage which ensued when Jenner received ESPN's Arthur Ashe Courage Award over 19-year-old Lauren Hill, the college basketball player who was the model of courage and selfless nobility in raising $1 million for cancer research before succumbing to the disease. The media will portray anyone who thinks Jenner does not deserve any given award as a narrow-minded hater, and critics will argue that giving Jenner any award is more likely than not merely a political stunt to butter one of the Left's pet agendas. My question here, however, comes from a very logical place. The Left is always harping itself as the true defender of women, the only folks who truly value and respect women's integrity and unique struggles. If that is the case, what does it say when that very Left gives a "Woman of the Year" award to someone who was once a man? Is it beyond the realm of common sense to imagine that many will interpret this move as suggesting that the best woman is a man? Considering that the very core of radical feminism and abortion is that women's ultimate success is to be more like men in the boardroom and in the bedroom, perhaps Glamour Magazine's award is less inconsistent with the Left's twisted logic than might seem at first.

To conclude, I once heard a very liberal comedian shout during a stand-up routine that men always lose arguments against women because men feel the need to be logical in their arguments and women do not. Perhaps we may borrow this unfortunate quip to say that the Left will always seemingly win its arguments over the Right because it does not feel the need to make any rational sense whatsoever; is apparently immune to, or oblivious of utter hypocrisy; and is the political party of a President who recently informed us, with beaming pride, that he has often reminded his daughters to look out for the voiceless and vulnerable, which I guess, given his abortion stance, does not include the most voiceless and vulnerable of all, the unborn child. So, the next time you are looking for an argument which makes sense, you know where not to look.