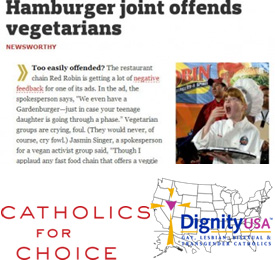 The other day I was thinking that I might want to join the International Vegetarian Union (IVU), which is an international non-profit organization whose purpose is to promote vegetarianism. The IVU was founded in 1908 in Dresden, Germany and is considered an umbrella organization which includes groups from many countries and often organizes world and regional vegetarian congresses. The primary purpose of the IVU is the promotion of vegetarianism and the support of vegetarian living. While I am at it, I would also like to join the Vegetarian Society, which is British registered charity established over 150 years ago to support, represent, and increase the number of vegetarians in the UK. In fact, I want to join every vegetarian group and society that I can get my hands on, so I can develop networks and connections with vegetarian folks and those who love them.

As many of you know, vegetarianism is the practice of abstaining from the consumption of red meat, poultry, seafood and the flesh of any other animal, and may even include abstention from the by-products of animal slaughter. While many vegetarians refuse to even consume dairy products, such as eggs, cheese, or milk, since these come from animals and my cause suffering or earlier death to them (ethical vegans), others rationalize their consumption of these products because animals are not killed to provide it. I know that various religions encourage and respect vegetarianism to some respect, but I will not necessarily worry about that as discussed below.

As I understand it, vegetarianism can be adopted because someone objects to eating meat out of respect for sentient life, or for religious, moral, animal rights, health, political, environmental, aesthetic, or economic reasons. Apparently, as well, there are numerous variations of vegetarianism, from total vegetarianisms to various semi- and sub-specialties. I like the fact that there is some disagreement about just how vegetarian vegetarianism should be, for matters that will be discussed below.

The only problem I have with becoming a vegetarian is that, to be honest, I love fish, chicken, and even the occasional steak or hamburger. Nothing like a nice juicy salmon, drumstick, or steak to hit the spot, I always say. Come to think of it, I also like eggs, cheese, milk, and other dairy products. While I do not like animal abuse, that has never stopped me from enjoying the foods above, since I have decided to define animal abuse as hurting or hunting animals for sport, amusement, or some deranged pleasure. This prevents me from feeling bad when biting down into one of those juicy foods noted above while still, of course, calling myself a vegetarian, which sounds so sophisticated, modern, noble, healthy, and progressive, don't you think?

I have the solution to my dilemma as noted above. I will define vegetarianism as I see fit, call anyone who disagrees narrow-minded, hateful, old-fashioned, radical, offensive, judgmental, and discriminatory. I will write articles on how deeply wounded I am by being treated differently by vegetarians not pleased as I munch on a steak at a vegetarian meeting, wipe out a delicious salmon steak at a gathering of vegetarians, or put away a few drumsticks while marching in a vegetarian parade.

I will create a group called Vegetarians for Meat and hold weekly meetings where we will discuss and debate what vegetarianism should really be, why all vegetarians who came before us are fools for not being as enlightened as we are, and why we will move vegetarianism out of the dark ages and into the new century with our noble thinking. I know that the first step to overthrowing any strongly held view is to introduce discussion and debate as open-mindedness, followed by slowly turning the majority view into a minority, radical, out-of-touch view that is inflexible, hateful, and narrow-minded. In fact, we will call for inclusiveness and argue that those folks that disagree with us which to exclude good people who want to eat meat while calling themselves vegetarians. We will demand to be allowed to march in all vegetarian parades with our own banner, and sue any vegetarian business which refuses to sell us flounder, burgers, fried chicken, or porter house steaks. I will personally design our flag, which will be a cow, a fish, and a chicken proudly looking up as symbols of the new vegetarianism.

Not forgetting that our children are our future, and that we must change the mindset of children before we can change the mindset of society, we will demand the right to speak at all schools in order to introduce, expose, promote, and illustrate the value of our new vegetarianism. In fact, we will infiltrate the political and legal world to enact legislation enforcing our view of vegetarianism as the true vegetarianism and, hopefully, be able to arrest and imprison any vegetarian who hassles us when we dine at or favorite grill place.

By the way, I will make sure that the media is on my side 100%, so it can help me marginalize old-fashioned vegetarians and brainwash everyone else into considering me the de facto representation of the new vegetarianism. Whenever anyone has a question about vegetarianism, the media will increasingly help me be the "expert" so that, very soon, I will be vegetarian and the former vegetarians will be some nuts who still believe in superstition.

You may wonder why I would go to all this trouble to push eating meat among vegetarians when it would be much easier to simply eat meat with non-vegetarians. Why, in fact, would I oppose and offend people belonging to a group which I have, for want of a better term, invaded with my new contradictory ideas and sabotaging views. Why not, some might argue, just make another group and distance myself from vegetarians?

The answers to the above questions are all the same, my friends. It is because, deep down inside, I resent what vegetarians represent, with their high and mighty view of health, discipline, nobility, and membership in an exclusive group. When I was a child, I was tormented by people who bashed me over the head with how healthy fruits and vegetables were, and how too much meat in my diet would eventually kill me. Now, you see, it is my chance to get revenge, to turn those people on their heads, so to speak, and to push them out of their own group, all while painting myself as some freedom-loving, noble, all natural, and enlightened progressive being. So what if people have twenty deeply held reasons for representing vegetarianism as what it has been for hundreds of years. What matters, after all, is what I want, and what makes me feel comfortable today, right?

Well, there you have it. This is my manifesto as to why I want to change the definition of vegetarianism to "anyone who might, at times, feel the need to not eat meat but, at other times, might feel the need to consume as much meat as he or she wants, depending on whatever they are feeling at any given time." Oh, by the way, I just decided that I was just kidding, because I know how ridiculous it sounds to call yourself a vegetarian because you say so, while consuming meat at whim. I know how absurd it is to walk in and pretend that my personal, subjective rationalizations and whims carry much more moral, practical, and historical weight than hundreds and even thousands of years of belief and practice. I have a pretty good sense of how arrogant, insolent, and selfish it is to enforce and bully my way into a group, demanding tolerance when I do not practice it myself with anyone who disagrees. In fact, I know how simply pathetic it is to argue that someone like animal rights advocate Peter Singer would embrace my view of vegetarianism because, after all, he is all about love and, in fact, the Peter Singer who I believe in would not tell me I am wrong and exclude me, would he?

I just wish other people in other situations would be honest and admit that their demands for inclusion are really only sinister attempts to infiltrate, overthrow, and destroy the organizations, groups, and religions they pretend to be a part of. Oh well, I guess one's man's just kidding is another man's sinister agenda.