Gabriel Garnica
Message to the Left: African-Americans, Latinos, and women are not leftist robots 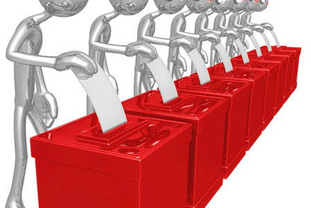 One of the ingredients in Hillary Clinton's stunning and humiliating defeat at the hands of Donald Trump is often cited as the failure of the so-called Obama voting block to behave, and vote, as they were expected to. Inherent in this failure, of course, is the absurd notion that all African-Americans, Latinos, and women behave in predictable and expected patterns.

If such a suggestion was made by a member of the Right, of course, we would hear the usual cries of racism, sexism, and even misogyny by the Left and its pet media and entertainment arms. Coming from the Left, however, this offensive presumption of racial, cultural, and gender uniformity is simply checked off as a given.

The Left and its agents in what pretends to be journalism and innocent entertainment would have us believe that Hillary Clinton only needed to snap her fingers, claim that she loved rap music and Mexican food, and remind everyone that she was in line to become the first woman president and all African-Americans, Latinos, and women would robotically fall in line and vote for her. What seems a full display of delusional, disgusting arrogance on their part to rational human beings, however, is merely common sense to the Left. After all, are not all African-Americans, Latinos, and women nothing more than Pavlov dogs ready for the Left's bell announcing that it is time to vote Democrat? Clearly, seen in this way, the obvious absurdity of the Left's presumption becomes all too clear.

Once one accepts that there is a certain way that everyone in such groups should vote, and that this path is in favor of any Democratic candidate regardless of how dull, incompetent, or corrupt said candidate may be, the logical conclusion one is led to is that any African-American, Latino, or woman who votes for any opponent of a Democratic candidate is a sell-out or a misguided fool.

The above warped thinking is destructive on three levels. First, it obviously relegates the different to secondary status, displaying an intolerance for diversity that would be comical if not tragic coming precisely from the political persuasion that pretends to be the champion of diversity in the first place.

Second, it fails to turn unexpected results into learning moments. Rather than asking why some members of the above groups preferred to vote in another direction, these presumptions either ignore or mock those differing choices, thereby failing to render to them the respect and consideration which they deserve.

Lastly, and perhaps most destructively, the presumption that all so-called normal African-American, Latino, and female voters must vote for Democratic candidates regardless of candidate ability or individual voter preferences is insulting, hypocritical, and patronizing to every member of these groups. There is nothing quite as pathetic as seeing a so-called leader of any of these groups scramble to explain, excuse, or deny the fact that such groups are rich with profoundly and uniquely diverse members with working brains who can make individual choices.

Ultimately, the surprised looks and dropped jaws of the recent election are nothing more than displays of unmet presumptions and expectations which, perhaps, should not have been made in the first place. All too often, we are reminded that voting is about individuals, not so-called voting coalitions which robotically pull the voting lever in a given direction at the sound of a bell. Once in a while, voters rise up and slap these presumptions right in the face of their arrogance, resulting in historic upsets which perhaps should not have been so upsetting in the first place.