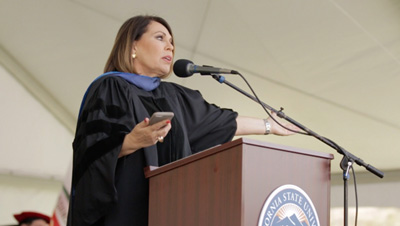 Maria Elena Salinas, widely recognized as the most prominent Latina journalist in the country and a close friend of equally prominent Latino journalist Jorge Ramos, was booed during her commencement speech at Cal State Fullerton after directing part of her speech in Spanish and using the event to criticize Donald Trump. Predictably, Salinas cited the situation as an illustration of division and racism in this country, characterizing what happened as "sad." She also seemed to blame this situation on the Trump campaign, openly wondering if this would have happened two years ago. Salinas also added that it was sad that people turned such a special moment into a racial war.

As a proud Latino professional, I do my best to be as objective and fair as possible, and so what happened at Cal State is particularly annoying and offensive to me. In the interest of brevity, I will briefly list my issues with this situation.
© Gabriel Garnica