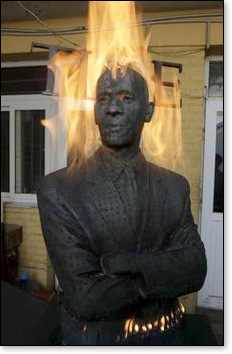 Showing his admiration, Liu Bolin said, "Obama is a very interesting and perspective leader. He is so hot now that I decided to impress this in "Burning Man Obama" work. Yes, setting something on fire can have negative connotations, but this piece represents energy and life that Obama has given to the world. We're eager to see what he can do for China and U.S. relations."

Made of bronze and modeled after an Obama Time Magazine "Man of the Year" cover, the statue is peppered with tiny holes for gas flames which engulf the statue giving it a nightmarish and satanic look unintended by the artist.

Fiery flames are one of the "Twelve Symbols" found on Chinese Imperial robes. It represents the Summer Solstice and the renewable energy of the emperor himself. However, the main impression of the work is one of unintended consequences. Because it deals with a controversial political figure both at home and abroad, it speaks immediately to the viewer's own political orientation.

In other words, Bolin's work is very much like Obama himself in that it is a blank slate on which to write one's own perceptions. It doesn't elevate the viewer like great art but relies on the shock value of an uncontrolled, undisciplined energy. It confirms the viewer's own primal orientation towards fire, not as a source of light and energy as represented by contained symbolism inherent within candles, oil lamps or halos of spiritual enlightenment, but as an out-of-control, destructive, consuming beast gobbling up the very person it seeks to honor.

It literally morphs Obama as human being into Obama as human torch with all the agony implied of burning at the stake. It is a fearsome look at the destruction of elemental fire on an empty corpse when those gas jets hit the cadaver at the local crematorium.

There is also the unfortunate side-effect to all the misplaced enthusiasm of the artist and that is the gift the English language has for puns and playing on words. After the initial emotional jolt for the viewer is over, one's mind starts wandering over the rumors concerning Obama's preferred sexual orientation (flaming gay), his overseeing of the destruction of America by stripping her of her assets (fire sale), his Apologize-for-America world tours (flaming shame), what the military must be thinking of him right now for his continuous stalling on Afghanistan (burning bastard), his silent, communist, czar-laden coup (blazing lunatic), his desire to push the destructive global warming agenda on us even as we enter a new Ice age (hottest hoax around) and his total disregard for his Presidential oath to uphold, protect, defend and preserve the Constitution of the United States (liar, liar, pants-on-fire).

Then there are those weekly Wednesday night soirées where Obama parties hardy by scarfing down Kobe beef and vodka martinis while the rest of us tighten our budgetary belts (disco inferno). Of course, there's Obama's tardy, weak and politically correct response to the murderous Sudden Jihad Syndrome outburst by a Muslim at Ft. Hood (gun fire) and there's the total and complete lack of real national security while Obama's incompetent Secretary of Homeland Security ignores our porous borders (up in smoke) whereby some actual terrorist someday is going to bring in a suitcase nuke driven by the desire to make the real Obama look like his statue (spontaneous incandescence).