Ann "Babe" Huggett
The U.S. Department of [Social] Just Us

July 25, 2010
In the 2006 movie, Superman Returns, viewers were jarred out of their childhood memories when actor Frank Langella, as Daily Planet editor, Perry White, mangled Superman's comfortingly familiar patriotism of "Truth, justice and the America Way" to "Truth, justice...and all that other stuff." When confronted about this near-sacrilegious change in dialogue, screen writers Mike Doughtery and Dan Harris and Director Bryan Singer smugly blew off the outrage using the justification that Superman was an alien without papers, here to save the world, not just America and that the 1945 version of the "American Way" was irrelevant in a new century. 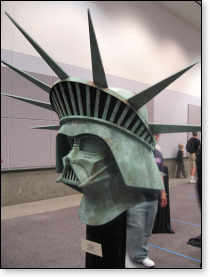 To them, Superman was a world citizen and transnationalist, here to make them a movie profit in Abu Dhabi as well as Peoria, IL.

Fast forward to the June 2010 DC Comics #600 edition and we see another Justice League member, Wonder Woman, forsaking her homage-to-America bustier style, legless body suit complete with fetching red boots for more modest black leggings, dark blue shoes and jacket and red, scooped-neck top all highlighted with gold accents. Her glorious mane of black hair is reduced to a sleek, shoulder brushing length and all that's missing is a cocktail purse for pub crawling after hours. So, instead of a full out physical exultation of a powerful, patriotically-inspired woman righting wrongs, a now 69 year old icon of real woman's liberation has faded discreetly into the background so as not to upset non-American readers.

In effect, the current copywriters for both Superman and Wonder Woman have stripped them of substance and just substituted a meaningless, corporatist, international style, which is referred to as "Neo-fascist Modern," a term first coined in interior decorating circles in the mid-2000s referring to soulless design more suitable to hotel lobbies than private homes inhabited by real people.

While that sounds fairly innocuous, what if Life, especially in the partisan political arena, started imitating (low) Art by ridding itself of its pertinent Constitutional, American symbolism and meaning in order to go internationalist from look, feel and orientation so as not to unduly ruffle the feathers of transnationalists everywhere? Then add a statement motto attributed to communists just to rub the corruption of the original departmental intent further into the face of American citizens and voila! I've just described the new US Department of Justice's official web site, a soulless paean of generic surface black and, white with gold accents underlain with red socialist intent.

Gone is the red, white and blue banner with full color seal presiding over a packed page containing the all important "What we do" bullet points in the right hand margin. Before the Obama Administration make-over, concerned citizens could rest assured that their Department of Justice was combating terrorism, seeking out wanted fugitives, locating missing persons, combating gang violence, upholding civil liberties, fighting human trafficking, stopping domestic violence, and generally making America a safer place.

Now we are treated to the newer, less cluttered Justice Department 2.0, whose main thrust seems to be a propaganda platform for the Obama Administration. As one blogger on Free Republic noted, "The web site looks awful. Very dark and dreary. Almost Darth Vaderish."

Most notable in the header is the quote, "The common law is the will of Mankind issuing from the Life of the People." According to The American Spectator article by The Prowler, Justice Loses Its Stars and Stripes,

...But other Department of Justice employees say the quote originates from British lawyer, C. Wilfred Jenks, who back in the late 1930s and after World War II was a leading figure in the "international law" movement, which sought to impose a global, common law, and advocated for global workers rights. Jenks was a long-time member of the United Nation's International Labor Organization, and author of a number of globalist tracts, including a set of essays published back in 1958, entitled The Common Law of Mankind.

Most telling: Jenks, as director of the ILO is credited with putting in place the first Soviet senior member of the UN organization, and also with creating an environment that allowed the ILO to give "observer status" to the Palestinian Liberation Organization, and to issue anti-Israeli statements, which precipitated efforts by the U.S. Congress to withdraw U.S. membership from the ILO. The U.S. actually did withdraw in the mid-1970s due to the organization's leftist leanings.

"It was Jenks's efforts that helped make the ILO a tool of the socialist and communist movement," says one of the DOJ lawyers. "We used to joke about how fitting it was that this was Janet Reno's favorite quote to use in speeches, and now the Obama folks think it encapsulates out department's mission."

Couple this with the current members of the US Supreme Court, who already favor the precedence of International Law over the US Constitution, like Ruth Bader Ginsberg and Sonia Sotomayor with the easily influenced Stephen Breyer and Anthony Kennedy, then currently-considered, International Law and socialist advocate, Elena Kagan's nomination takes on an ominous, pincer-like movement by the Obama Administration to corrupt both the Justice Department and the US Supreme Court.

So, instead of the US Constitution, which is currently ignored whole cloth by all branches of the US government, our corrupted, neo-fascist modern Department of Justice and soon-to-follow US Supreme Court will steadily subject us to UN codes, covenants and restrictions which further the transnationalist, socialist, globalist agenda among which are confiscation of guns, outlawing of free speech, the homosexual agenda, the loss of parental control over children, the planned triumph of Islam, the condemnation of Israeli self-defense, the outlawing of Christianity, the destruction of national borders, planned economies, the global warming agenda, forced poverty through "sustainability," population control, global income redistribution and the rationing of medicine through nationalization.

Oh, and that motto once again of "The common law is the will of Mankind issuing from the Life of the People." is nothing more than globaloney used to justify the will of the elites over the rest of us. Just think back to this year's Captain America fiasco where, in Marvel Comic issue #602, Cap tried to pull a Janet Napolitano and label the TEA Party patriots as racists. The TEA Party movement is a legitimate expression of the American people but, when you are firmly encased in the socialist mindset, you don't count on "the people" actually not following your will.

This article first appeared at EmergingCorruption.com and is reprinted in its entirety with permission from the author.