November 1, 2010
Babe Huggett Boots-on-the-ground reporting from Houston, TX - Lost in all the liberal-left/media smear machine tactics aimed at Houston's King Street Patriots for uncovering blatant Democratic Party voter fraud within minority communities in Harris County is the fact that the King Street Patriots developed an initiative called True the Vote, ( http://www.truethevote.org/)dedicated to ensuring that elections are free and fair. 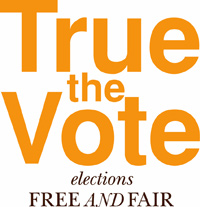 True the Vote's initiative game plan is to get concerned citizens actively involved in the election process to combat voter fraud. While fraudulent votes are a main worry anywhere, unwatched polls, corrupted judges and clerks are also a main, but underreported, venue for fraud. The True the Vote initiative provides resources, instructions and the training to ensure that those Americans concerned enough to get actively involved in the election process, know their legal requirements and rights at the polling place.

Watching the voter fraud occurring in minority communities and hearing the horror stories of poll watcher witnesses, it is becoming rapidly apparent to this reporter that the majority of the judges and clerks within these communities in question have partisan ties to the Democratic Party. (http://emergingcorruption.com/2010/10/harris-county-tx-king-street-patriots-turn-tables-on-department-of-justice/)

There are several positions that concerned citizens in Texas can apply for, some of which are paid : Precinct Chair, Deputy Voter Registrar, Presiding Judge, Alternate Judge, Clerk, Poll Watchers and Judges Booth Controllers (JBC), who operate the machine which give out the voter access code to vote.

For those position other than poll watchers, the King Street Patriots started with True the Vote Boot Camp in September which they described as, "...a preparatory course to teach fundamental polling place procedures, focusing on identifying voter fraud or intimidation. Attendees will be instructed in the proper procedures to identify, report, and document, illegal behaviors in the polling place and surrounding area classes "

Their boot camp was followed in October with training provided by Harris County itself featuring election law and E-Slate training.

Volunteers wishing to be poll watchers could attend Texas election law classes at the King Street Patriots' headquarters from September through October. Instructors Alan and Colleen Vera, provided handouts, testing, guidance and on-line attendance from bloggers as far away as Hawaii.

I spoke with Catherine Engelbrecht, who is head of the King Street Patriots, and she stated that they have trained over a thousand poll watchers through True the Vote.
The views expressed by RenewAmerica columnists are their own and do not necessarily reflect the position of RenewAmerica or its affiliates.