August 17, 2010
New York City Mayor, Michael Bloomberg, is currently on record excoriating opponents to the construction of the Islamic Cordoba Center mosque scheduled to begin construction on September 11, 2011 in Lower Manhattan. The proposed mosque's site is two blocks from the former World Trade Center's Twin Towers destroyed ten years previously on September 11, 2001 by Islamic jihadists. Bloomberg's demands of religious tolerance from his city's citizens is inconsistent in a city with 100 mosques already in operation but with a school system that will not acknowledge Christianity or Christmas, or even allow the repairs necessary for the Greek Orthodox Church, St. Nicholas, to go forward nearly a decade after it was crushed by falling debris from the Twin Towers themselves. 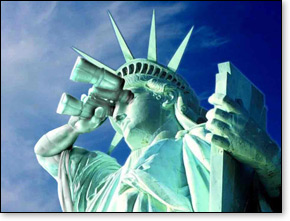 Paralleling Mayor Bloomberg's veiled insults towards those acutely aware of the historical Islamic conquest of non-Muslim lands by their building of mosques on top of or dominating a conquered people's holy sites, is the concurrent Bloomberg LLC's expansion of its Dubai financial center into a regional hub for the UAE. Founded in 1981 by Michael Bloomberg, who privately owns 85% of the limited liability corporation, Bloomberg LLC is a dominant player in global financial software, data gathering and news, commanding one third of its market niche estimated at $16 billion dollars.

According to the regional head of Bloomberg LLC's Middle East and South Asia centers, Max Linnington, "The region for us has seen explosive growth. For example, last year in the UAE, we grew our core business by 61 per cent. And already this year, we exceeded what we achieved in all of last year in the UAE. So we are selling a lot of Bloomberg terminals, basically."

Linnington went on to add, "Particularly since the meltdown of the western capitalist system, there has been an increasingly large focus on the virtues of Islamic finance. Today, there is no one single provider of information that caters to the Islamic finance market. So by Bloomberg being here, we are in the process of building out an Islamic finance product. We are very confident that we can build a product that meets the needs of the market right now."

Bloomberg LLC has news bureaus throughout the Gulf Corporation Counsel (GCC) and is opening offices in Saudi Arabia and Qatar. Its new Dubai regional hub will cover financial news, analysis and data gathering throughout the Middle East and extend Eastwards across Afghanistan, Pakistan, the Indian subcontinent and Nepal.

Sharia banking does not pay interest but donates a percentage to Islamic interests around the globe, mostly centering on Islamic expansionism through building mosques, madrassas, Western law suits (lawfare) or more violently through Islamic jihadist terrorism. Therefore it should not come as a surprise that a co-founder of the Hamas organization, Mahmoud al-Zahar, came out and said the following about the controversial Cordoba mosque, whose imam, Feisal Abdul Rauf, refuses to identify Hamas as a terrorist organization, "We have to build everywhere. In every area we have, [as] Muslim[s], we have to pray, and this mosque is the only site of prayer. We have to build the mosque, as you are allowed to build the church and Israelis are building their holy places."

Considering that there are so few Muslims in Lower Manhattan and that they already have 100 mosques in New York City from which to choose, Al-Zahar's reasoning is as specious as Mayor Bloomberg's especially since the definition of what is considered "holy" needs to be examined. For Americans in general and New Yorkers in particular, the site of the Twin towers and the memory of the nearly three thousand, who died in the worst domestic attack on US soil, is a holy site. For Muslims worldwide that attack and destruction represents the triumph of Islam, which makes Ground Zero "holy" in their eyes but a definite historical and psychological assault on US citizens.

By siding with Islamic expansionism through mosque building, New York Mayor, Michael Bloomberg's insulting tirade against the Cordoba mosque's detractors, calls into question his business ethics in catering financially to an avowed enemy of Western civilization and democratic principles.