November 18, 2010
Not willing to be victimized or intimidated by a spurious lawsuit claiming failure to register as a political corporation, reveal non-existent prohibited corporate campaign contributions along with its equally non-existent donor list brought against them by the Texas Democratic Party, the non-profit, 501(c)(4) organization, citizen-volunteer and citizen funded King Street Patriots, led by Catherine Engelbrecht, filed a countersuit in Austin on Monday, November 15 claiming defamation and requesting that those parts of the Texas election code restricting free speech be ruled unconstitutional. 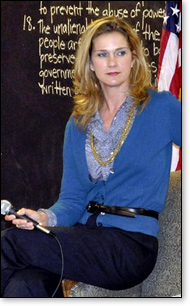 The Democratic Party's vehemence was triggered by the King Street Patriots' dedicated uncovering of voter fraud on the rolls and its non-partisan True the Vote initiative, which seeks to assure fair and free elections for voters of all political parties through education and training of poll watchers and poll workers to look out for additional voter fraud at the polls.

Some of the election abuses uncovered and documented by the King Street Patriots have included multiple voter registrations, non-citizen voter registrations, fraudulent voter information, forged voter signatures, election officials verbally bullying voters to either change their ballot choices or vote a straight Democratic ticket up to and including actually manipulating the voting machines for the voters and elected officials, like Democratic Congresswoman Sheila Jackson Lee, campaigning directly outside polling places. Other documented Democratic Party member abuses include a lunatic minister and a self-proclaimed leader of the New Black Panthers along with his henchmen entering polling places to verbally and physically intimidate poll watchers.

The Democratic Party is joined by two front groups in a lawsuit and an ethics complaint against Catherine Engelbrecht and the King Street Patriots. The two groups are Texans for Public Justice and Texans Together Education Fund. Both groups receive their money from the Open Society Institute (OSI). OSI was founded in 1993 by George Soros to "Build Vibrant & Tolerant Democracies" so it is ironic to see that tolerance is not extended to groups dedicated to fighting voter fraud. Texans Together Education Fund's subsidiary is Houston Votes currently itself accused by the Harris County Tax Assessor-Collector office of voter fraud registration.

Catherine Engelbrecht and the King Street Patriots are represented by the 501(c)(3) non-profit organization, Liberty Institute and the James Madison Center for Free Speech, which was founded to protect the First Amendment rights of free speech and political discourse for American citizens and citizen groups.

The president and CEO of Liberty Institute, Kelly Shackelford, stated, "As a matter of law, corporations cannot sue individuals for defamation; this attack is baseless. All these attacks are clearly an attempt to bully and silence a group of volunteer citizens who are just trying to keep the election process honest. This is pure desperation by a Democratic Party everyone knows is not doing so well."

Additionally, James Bopp, Jr., the architect of the U.S. Supreme Court Citizens United campaign finance case, who is a lead Constitutional counselor at the James Madison Center for Free Speech and who is personally handling the King Street Party's countersuit said, "The Texas Democratic Party is using state law to try to silence citizens' political free speech even though the U.S. Supreme Court vigorously applies First Amendment protections in this area. Nonprofit 501(c)(4) organizations are allowed to engage in the political process without disclosing their donors or registering as a political committee, and Texas laws to the contrary are unconstitutional."

The last word, however, goes to Catherine Engelbrecht herself, who commented, "Although I'm disgusted by these attacks, I am not deterred. Our work in Houston and our vision for a fair and free election in every county of the nation continues. These lawsuits are exactly the kind of abusive disrespect for citizens that got our political leaders into trouble. We will not be intimidated by partisan attacks, by the Democratic Party, or by anyone."

And, in a phone interview with this reporter last night, Engelbrecht added the following determined statement, "We're prepared to go the distance."