Ann "Babe" Huggett
It's time once again for Pigs in Space!

July 8, 2010
There's a lot of hand wringing and ink being spilled currently over President Obama's new realignment of NASA's goals from space exploration as an example of American exceptionalist ingenuity to subservient babysitter of the delusional Muslim ego and its claims of aiding and advancing civilization. Don't ask me when mining ancient ruins for architectural elements, ripping off Indian numerical script, plagiarizing the best minds of those enslaved and destroying any manuscript not of practical use to or agreeing with the Islamic world became criteria for a world-class culture and civilization but that's Islam's history and we're stuck with it. 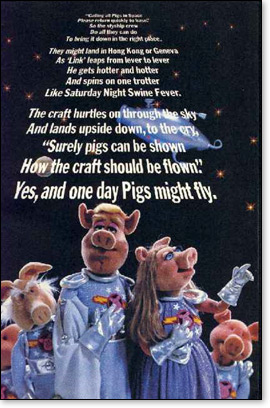 Now all jokes aside about using suicide bombers as new lift off rockets but what people are forgetting is that there have already been Muslim astronauts. In June of 1985 Prince Sultan Salman Abdulaziz Al-Saudi went up on STS-51G Discovery as a Payload Specialist representing the Arab Satellite Communications Organization (ARABSAT) to deploy their satellite, ARABSAT-1B. He was part of a seven man international crew and when I say "man," I mean human because there was a woman commander, Dr. Shannon W. Lucid, over him and from whom he reused to obey orders.

Yes, you got that right. He proudly stated in news reports later that as a Muslim he was not going to obey a woman because she was inferior to him. Screw the danger and forget equality; his "religion" trumped all notions of chain of command and safety. Needless to say that Prince was hustled off the NASA team and retired from that agency's space program pronto.

I have to go from memory on this because there is no web back-up available and unpalatable facts also have a tendency to "disappear" from the web. However, web research shows that echoes of that misogyny popped up in 1995 when Saudi air traffic controllers refused to speak to US female fighter pilots while those pilots were on mission in Saudi Arabia, the Saudis also required that US non-combatant female military personnel in Operation Desert Storm and Shield wear abayas while in Saudi Arabia and Saudi royals in 2002 demanding that all female air controllers in the US be thrown out of their seats while those royals were flying in US air space.

So, in "honor" of Muslim misogyny, maybe it's time to revisit the old Muppet's Pigs in Space just to remind ourselves that the final frontier isn't halal no matter how nicey-nice NASA is required to be. After all, we're dealing with a mind set that believes everything their prophet told them as Allah's own truth so it should be hilarious watching NASA astronomers turn themselves inside out trying to accommodate the Islamic belief that the sun sets at night in a swamp only to emerge in all its fiery glory the next day.

So, with my sincere apologies to the late, great Jim Henson, here's my version of Pigs in Space 2010 once again starring Captain Link Hogthrob, First Mate Piggy, Dr. Strangepork and special guest, Achmed the Terrorist:

Pigs in Space!!!! Aboard the USS Swinetrek, Captain Link Hogthrob is about to find out that in space, no one can hear him scream out his coffee order...

HOGTROB: ..And make that a half-caf decaf with a twist of lemon, extra foam...

HOGTROB: Later, First Mate Piggy! I want that coffee and I want it now!

FM PIGGY: What? I can't just put our communications on hold like that!

FM PIGGY: But it's a direct communiqué from Swine Fleet's New Arabic Sensitivity Administration, a.k.a. NASA!

FM PIGGY: That's not in my paygrade, Captain. Get it yourself!

HOGTROB: Pleeeeeeeeeeze! You know I never got the handle on that foaming nozzle action! Milk goes all over the place and I never clean up after myself!

HOGTROB: Sure thing...oh, and get me a chocolate biscotti to go with that will you? Hmmmmm...let me see...if I twist this dial here and push that button there, I should be able to bring the NASA message up on the screen...

STRANGEPORK: Captain! What have you done? Get away from the control panels! I'll take over. Where is First Mate Piggy? Not getting you coffee again, is she?

STRANGEPORK: You sound like our President when his teleprompter goes blank. Never mind, message received. We're getting a new crew member; he's beaming up right now.

ACHMED: I keel that bastard tech! Imagine telling me there are no beamers in Saudi Arabia!

HOGTROB: Did I miss out on a diversity training class somewhere or is that a standard greeting?

STRANGEPORK: I think in our case it may be standard from now on...

ACHMED: Silence or I keel you! As of today Swine Fleet will be made over in my image!

HOGTROB: You mean we're all dieting down to nothing but rags and bones?

ACHMED: Silence! Silence, pig dogs! I keel you!!!!! I cut you up into little, unclean ribbons and hang you from telephone poles...

FM PIGGY: What's going on in here? What's with all the screaming? Who the heck are you and when is the last time you had a decent meal?

ACHMED: Aieee! Another pig! Haram! And a sow! Double haram!!!

FM PIGGY: Hey! Who you calling a sow, bone face? I'll do your "double haram" with a double wham! Hiiiii-yah!!!!!

SOUNDS OF BONES SPLINTERING AND CLATTERING ALL OVER THE DECK

STRANGEPORK: Well, that's Achmed all over!

Tune in next time to hear Captain Link Hogthrob explain to Swine Fleet Command about why Achmed the Terrorist is nowhere to be seen on board...

HOGTROB: Well, sir...you see... Swinetrek is the future and there is no future in Islam...