July 22, 2012
Many people know Charles Dickens' classic opening line in A Tale of Two Cities on the French Revolution:

Academics and liberal politicians like to say that our American Republic's spirit and soul is a derivative of the French Revolution. This is not so. The so-called "Enlightened" anti Christian Revolution out of France from 1789-1799 perpetuated a godless society and a bloody reign of terror where man's "reason" was deified and God's reality and biblical revelation was denigrated and/or denied. The American War for Independence, on the other hand, relied profoundly on "the Hand of Providence" and presupposed that:

"In the beginning God created the heavens and the earth" and that He "governed in the affairs of men."

When we declared our independence from a tyrannical King and punitive Parliament our Founders declared,

"We hold these Truths to be self evident that all men are created equal and they are endowed by their Creator with certain inalienable rights that among these are life, liberty and the pursuit of happiness..."

Thus, we defined mankind's ultimate origin and destiny as God-centric; not man- and State-centric. French revolutionaries, on the other hand, mixed flowery democratic and republican rhetoric with the ugly reality of draconian government control in trying to re-create man in man's image; not as free citizens but as puppets, servants and subjects to the State, manipulated by an intellectual elite that believed they knew what was best for all! 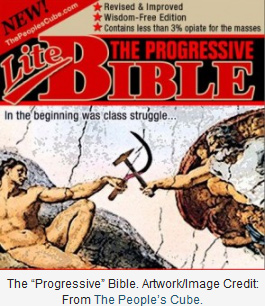 Thus almost all Anarchistic, Socialistic, and Communistic movements and revolutions look to French Revolutionary philosophers as their spiritual godfathers. Lenin himself made the comparison with the French Revolution's horrible reign of terror when he stated,

"It will be necessary to repeat the year 1793. After achieving power we'll be considered monsters, but we couldn't care less." 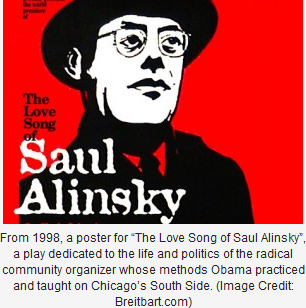 It is imperative for us not to underestimate the Statist-Marxist influence the unabashed card-carrying member of the Communist Party, Frank Marshall Davis had on Barack Obama during his formative teenage years in Hawaii.

At Occidental, Columbia and Harvard, Obama tells us he surrounded himself with Marxists professors, structural feminists, Franz Fanon and other radical socialists and big government advocates. After Harvard Obama's tutelage was with disciples of Marxist Saul Alinsky as he learned the ropes of revolutionary "rules for radicals" in the communities of Chicago. In 1998, Illinois State Senator Barack Obama was not only an honored guest to watch the play The Love Song of Saul Alinsky, he was a spokes person for the play and defended the cultural Marxist worldview of Alinsky. Alinsky, who dedicated his book Rules For Radicals to Lucifer, is portrayed in the play as the biblical Moses; having a discussion with God over the oppression of capitalist man over the poor; and he tells God he'd rather be in hell with the poor than in heaven with the rich.

Another radical Chicago connection was the twenty-year mentoring relationship Obama had with the preacher of Marxist Black Liberation Theology, Reverend "God-D$%$n America" Wright! Many of the above-mentioned characters helped shaped President Obama's Worldview and Vision.

Barack Obama at best, gives lip service to our Founders and Christianity in front of the cameras, when in reality he disdains our Founders' vision of a free and just republican society under God. Obama's mentors envisioned the restructuring and transformation of society by an ancient Grand Utopic Narrative that ignores the fallen nature of man, and the words and wisdom of God, as given to us in the Judeo-Christian tradition. Obama's vision sets aside the Bible he was sworn in on and replaces it with the writings of elitists whose arrogant ways believe they can deliver us from evil and provide our daily bread.

Far beyond a New Deal and Great Society, Obama's progressive-socialistic vision is the attempt to tear down the City on a Hill given to us by our Founders and in Nimrodian fashion build a Big Government Tower of Babel that is theoretically a stairway to heaven but ultimately a road to "the other way." 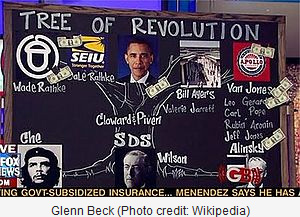 A classic example of this Statist-Collectivist babbling is when in Philosophe Obama declared from on high:

"Look, if you've been successful, you didn't get there on your own. You didn't get there on your own. I'm always struck by people who think, well, it must be because I was just so smart. There are a lot of smart people out there. It must be because I worked harder than everybody else. Let me tell you something — there are a whole bunch of hardworking people out there. If you were successful, somebody along the line gave you some help. There was a great teacher somewhere in your life. Somebody helped to create this unbelievable American system that we have that allowed you to thrive. Somebody invested in roads and bridges. If you've got a business — you didn't build that. Somebody else made that happen. The Internet didn't get invented on its own. Government research created the Internet so that all the companies could make money off the Internet. The point is, is that when we succeed, we succeed because of our individual initiative, but also because we do things together." 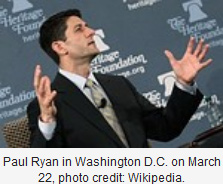 Wisconsin's brilliant native son Congressmen Paul Ryan was spot on when he said these words at a recent speech:

"He's[Obama] got this very government-centric, old 20th century collectivist philosophy which negates the American experiment which is people living in communities, supporting one another, having government stick to its limits so it can do its job really well ... Those of us who are conservative believe in government, we just believe government has limits. We want government to do what it does well and respect its limits so civil society and families can flourish on their own and do well and achieve their potential.

How does building roads and bridges justify Obamacare? If you like the GI Bill therefore we must go along with socialized medicine. It's a strange leap that he takes. ... To me it's the laziest form of a debate to affix views to your opponent that they do not have so you can demonize them and defeat them and win the debate by default. I think he believes America was on the right path until Reagan came along, and Reagan got us going in the wrong direction. And he wants to be as transformational as Reagan by undoing the entire Reagan revolution. ... I think he sees himself as bringing about this wave of progressivism, and the only thing stopping him are these meddling conservatives who believe in these founding principles so he has to caricature them in the ugliest light possible to win the argument."

How can we stop this hellish "wave of progressivism" collectivism, socialism, and Statism spearheaded by Barack Obama? The answer is easy but the road will be rough. Unless we are willing to fight for our Republic under God with an intensity not seen in this Nation since World War II, Obama's transformational coup will be the death knell to America. We not only need desperately to return to the fundamental republican principles that made America great, we need more practical leaders with moxy like Governors Scott Walker, Chris Christie, Bobby Jindal, Jan Brewer, Mitch Daniels, and Tim Pawlenty to not only bring State sovereignty and local control back to its rightful place, but to give true hope and inspiration to Americans across this great land. It may be the worst of times for many today but if we are willing to engage wholeheartedly in this war for the preservation of our Republic, we have everything before us! 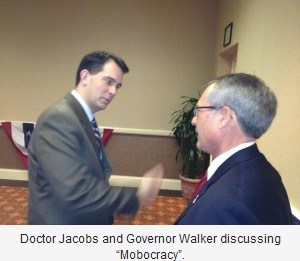 There is Hope, authentic hope. I know from experience, for over a year and a half I have traveled Wisconsin and America defending Governor Scott Walker and the American way of life. I have met thousands of Americans who know the perilous times we live in, and who are not going to let this Nation die without a fight.

On June 5th, 2012, the people of Wisconsin with a resounding voice, made history. For the second time in less than two years, we voted Governor Walker into office. The battle to save America began that night in Wisconsin! We made a statement to progressives, socialists and union thugs in America, Europe and the world:

We don't want your Big Government ways! There is a price we will not pay and there is a point beyond which the enemies of freedom must not advance. Mr. Obama, the buck stops here. It stops with those of us who cherish life, liberty and our constitutional republic under God. We have a rendezvous with our Republic and we will not let your European revolutionary actions and ideas take away from our children the last best hope of freedom on earth, America. We will not sentence them into the darkness of socialism and statism. So help us God.