Marielena Montesino de Stuart
"Pope" Francis ends up in the Vatican's hotel for "psychiatric reasons"
The Vatican is driving Francis crazy. He needs your help.

June 9, 2013
Francis said to a group of children on June 7 that he "did not want to be Pope" and that he is living at the Vatican's hotel (St. Martha's House) for "psychiatric reasons." Read about it here (and in Italian here).

The modernist Vatican is self-destructing before your very eyes.

Sadly, this does not mean that the self-destruction phase will bring about a quick return to tradition and reverence for Holy Mother Church, which is so desperately needed. It means that we will have to prepare ourselves for a very rough ride – as Francis continues on his bus tour to "the end of the world."

I discussed this in my article titled FRANCIS "The Bishop of Rome" – and the erosion of solemnity...

The Vatican is driving Francis crazy. It's time for real social justice. 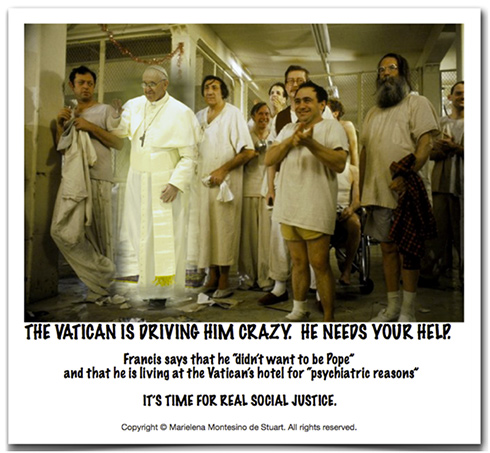 Someone has to say the truth... ♔
Read more articles about Francis and the Vatican HERE