June 11, 2013
The theory of gasses forming in the spacial universe that clashed and exploded, resulting in the earth, life, the human body including the intricacies of the ear, eye and brain which contains trillions of brain cells connecting to other parts of the brain which affects the entire body is what is strongly taught in the universities of today. 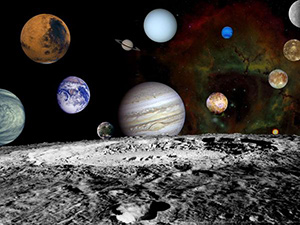 Indeed, this muddled thud of a scientific view is now taught in grammar schools to set the pace for future university graduates who will become future global movers and shakers.

It is not explained how that infinite space began that would house literally billions of trillions of planets, or stars. This intrigued my soul to examine the phenomena of the solar system itself.

Considering the planets including the earth, moon and sun, and their perfect order of rotations; their orbits of each other, their elliptical orbit, orbits on the same plane, orbits in the same direction and planets spinning in the same direction with their moons rotating synchronously (such as Jupiter) with (which is truly marvelous), only one (theorized) collision.

Uranus which has a 98 degree tilt is believed to have been caused by such a collision. This of course brings this writer to a sense of awe along with my own questions: Can such a phenomenon have been taking place spontaneously without chaos? Or is there indeed a higher intelligence – God – directing its order?

The Black Holes to me is the Bermuda Triangle of the sky. A place where weaker (neutron) stars suddenly disappear never to be seen again. As I understand it, it all is due to gravity that generates in areas of space.

A neutron star with lessening gravity is pulled within. Once inside, there is no escape for any entrapped matter (star) or even light. Eventually the black hole itself disappears.

Since one cannot look inside a black hole and since no electromagnetic radiation escapes, it is puzzling to know how it would have been discovered even though there are "Accretion Disks" around the black holes emitting X-rays which would mark the spot. Scientific math would do the rest.

The Birth and Death of Stars: According to university text books, "It all started with a 'Big Bang' 1.5 billion years ago, creating all space, matter and energy to which the universe emerged."

While there are suspicions about that theory (told for truth by school textbooks and the liberal press), we do know today that the life of a star begins with gasses coming together through the force of gravity. Those gasses, hydrogen, helium and carbon dioxide (the nebula) form a core in which the pressure of the cloud grows higher, to a point where the pressure will balance the gravity, reaching incredible temperatures of 15-18 million degrees. The fusion of the gasses begin and the result is a star.

During the life of stars, in particular the Cepheid, the outer layers cyclically expand and contract causing the star's gasses to heat up and cool down, which results in changes in both their size and surface temperature which is seen by those on earth with rapid brightening and gradual dimming of light, providing quite a show.

At the end of the life of a star, following it's peak as a Red Giant, the star begins to lose it's mass, sheds its outer layers, the core shrinks and it becomes a "White Dwarf," the size of earth. Then it cools to Black Dwarf, shrinks some more, then resulting iron fusion sucks in its energy collapsing it on itself.

The core (neutron star) shrinks and most likely is gobbled up by a black hole. Somewhere in all that is also a super-nova explosion throwing off great light. Even more intriguing, we will not even see this until many years later, depending on location and how long it takes the light to reach the earth.

These are only a couple of feelings regarding the universal planetary system, the temperatures, endless space, planets made out of liquid that looks like a solid ball along with many more. It fills me with a sense of both amazement and inner-disturbance.

In the solar system one can see incredible life and death of objects (matter-mass-light) that are in themselves lifeless; silent robotic creatures that have a place in the order of things. They are created (born) creatures that put on a light show that is seen on earth, then they shrink, explode and die, never to be seen again, while other such objects are being born as the process continues into infinity.

It is like a beautiful but macabre existence of moving, orderly things without consciousness, without life or feeling. And all of these inorganic materials function with perfect timing and without chaos in the heavens. And this we are told, all started when gasses gathered in the heavens, exploded with a Big Bang, and it all fell into place. Really!

Brilliant but corrupt scientist Carl Sagan tried to explain the Big Bang in his book, "The Violent Universe," this way, with a very telling, surprising ending:

"Scientists have narrowed down the mystery of creation. All that seems to be necessary is some hydrogen gas at the beginning. We understand how the hydrogen condenses into a first generation of stars, how these stars cook heavier elements in their interiors, how these heavy elements are spewed out in supernova and other explosions to enrich the interstellar medium, and how subsequent generations of stars and planets form from the hydrogen and heavier elements....And yet there's the beguiling problem: Where did the original hydrogen come from?" (highlights mine)

The Defense rests its case.

Rev. Austin Miles, a working chaplain has worked as a college instructor licensed by The State of California.