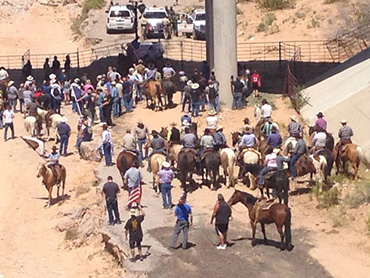 CLARK COUNTY NEVADA – This past week the government attempted to hijack The Cliven Bundy Ranch, a family farm that had been in existence for 140 years in Nevada. Under the Eminent Domain law, along with the pretext of 'protecting a desert tortoise,' the feds stormed in with over 100 armed troops, sharp shooters, helicopters and dogs ready to tear apart anyone who resisted. This was to be a showcase of Government (Communist) power to intimidate citizens.

The word spread quickly and a sudden swarm of gun toting patriots were on the scene to confront them. And they meant business. The government troops, taken by surprise, backed down and left the property without a shot being fired.

This might have also been a test to assess the will of Americans to see if indeed, they would intervene with weapons against a strong-arm government take-over action of private property since more such actions are scheduled for the future.

Leading up to this, the government has attempted to strip all citizens of their firearms to thwart such possibilities. To our good fortune, the NRA along with the common sense of Americans backed by the Constitution has stood in their way.

This is precisely why Hitler and Stalin made certain that no person would have a gun which would give citizens the ability to resist their dictatorial control and demands. Since the full-blooded Communists were a MINORITY in Russia, they knew the danger of the majority population having access to guns who could easily overtake them. It now is exactly the same in America.

Democrat Senator Harry Reid of Nevada clenched his teeth. He had partnered with China to use the land to set up a $5 billion solar farm (his cut?). The $1 trillion debt to China that the Obama Administration allowed was a factor. China also has eyes on being a major supplier of oil and natural gas that could be extracted from this and other seized properties in America.

It is significant to note that the price they would pay for the Bundy property under the Eminent Domain Law would have been $4.5 million when the actual value of the property is $38.6 million. So basically, Harry Reid and his communist partners were set on stealing the family farm in true Socialist fashion.

The government is so set on disarming Americans, that one cannot help but wonder if the growing amounts of mass shootings all over America were set up for that very reason, i.e. to prove how dangerous gun ownership for ordinary people would be. And this disarming is for our own protection (of course). This is for all our sakes .And for the sake of all of our children, all guns must be confiscated, they say.

Have you noticed that all of the current mass gun murders have shown the shooters to be mentally ill....insane, not level-minded people. A person with mental problems can be easily manipulated and I believe this is what has happened to provoke these mindless shootings.

We may have our own Manchurian Candidates in America. I have long suspected that the school shooting in Stockton, California on January 1,1989 which killed 5 school children and wounded 29 others including a teacher, were set up for that very reason considering the endless media statements of why we need all citizens to turn in their weapons. Several factors point to that possibility as one examines the details.

It is also to be noted that under Communism, the population lives in virtual poverty while the Communist leaders live in luxury. In Russia the traffic is so bumper to bumper it is almost impossible to get anywhere. Yet there is one wide lane in the center that nobody is allowed to enter except government leaders. And as they whiz by looking very superior, the comrades in their cars, stuck in traffic, say with disgust, "look at those fat czars on their way – PIGS !" The resentment is high.

Democrat Senator Harry Reid stands to become very wealthy by betraying the people who voted him in as their senator. What a slap in the face to those who trusted him. Unfortunately there are many such in our government, carefully placed there over the years. And as his government forces, including the Environmental Protection Agency (EPA) and Bureau of Land Management retreated, Dirty Harry in his best Arnold Schwarzenegger voice said, "I'll be back !" There are those who don't think that would be a good idea.

Obama is very much involved in these power shoves against Americans. He is acutely aware of the need to disarm people since his plans, along with the plans of those of his ilk that were PLACED in government are determined to take full control over all. Obama fully intends to again misuse Executive Order Privilege to declare himself Dictator for Life as his term ends in 2016....UNLESS......

Rev. Austin Miles spent time behind the Iron Curtain and learned first hand the plans for taking control of America, beginning with her churches. One plot is the intent to sabotage all electric and power grids. That has already been experienced as a rehearsal.