July 27, 2011
After reading Anders Behring Breivik's (the villain responsible for the recent massacre in Norway) so called "manifesto," Breivik and his manifesto both seem more like an extreme covert leftist trick than a document undergirding a legitimate terrorist movement. If these new "Templars" are real, their motivation is materialist and, therefore, Christian in name only. 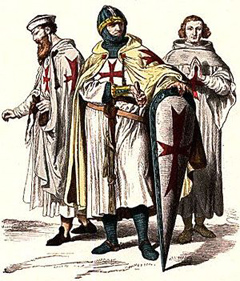 What makes the document suspect in my eyes, is the presence of legitimate information on the destructive nature of Cultural Marxism. The document begins with Breivik admonishing his fellows to edit; add to; and freely and widely distribute his "manifesto."

The introduction titled: "What is 'Political Correctness'?" and the following segment: "How it all began — Political Correctness is Cultural Marxism" are frankly spot on. Breivik's abbreviated history of Marxism, both economic and cultural, is very accurate, and not a little bit frightening, as what it lays out is very obviously true if you are a clear eyed observer of cultural indicators.

It is also the sort of thing a leftist would leave in so once theses Neo-Templars begin their Manchurian Candidate like attacks on defenseless targets, like the cowardly attack on the Norwegian children's camp, the truth in the document can later be dismissed as the musings of madmen and therefore rendered forever illegitimate arguments when engaged in debate with true cultural Marxists.

The document does not give a good reason for slaughtering children in an effort to reverse the harm done by leftist radicals who have been all too successful with their experiments in social engineering. It has all the earmarks of leftists propagating the myth that conservatives are as dangerous as radical Islam and if you can tie in Christianity through associating these evil men with the Crusades, by calling themselves 'Templars,' all the better.

That was me wearing my tinfoil headgear. Let us now address the more probable, yet equally distressing actuality of what is laid out in the manifesto.

It would not surprise me if these "Neo-Templars" are indeed a legitimate movement. But let's be clear, this is not a Christian movement. The original Templars were founded after the first Crusade and their primary function was to protect the world's Christian pilgrims as they visited the Holy Land after Jerusalem had been liberated from Islamic invasion.

The "manifesto" gives the origin of the Neo-Templars and talks of the movements anonymous founders even mentioning their spiritual affiliations, a number of whom adopt the dubious classifications "Christian Atheist and Christian Agnostic.

Through the manifesto we learn that:

"Choosing the path of the Justiciar Knight is to walk the path in pursuit of becoming "The Perfect Knight." Any candidate prepared to walk this road must be willing to forfeit his materialistic ambitions and embrace voluntary poverty and martyrdom."

Very noble sounding! And not at all dissimilar to an Islamic Jihadi pledge. The Neo-Templars forfeit their materialism to fight for European materialism. Make no mistake, God is an afterthought to these people, thrown in for the sole purpose of adding legitimacy to their claims of being modern Templars.

As Breivik rightfully points out, in his history of the original Justiciar Knights, the Templars sacrificed to "lay up treasure in Heaven" by protecting Christians from being killed by Muslims while on pilgrimage, which is exemplified by the Scripture verse:

"Greater love hath no man than this, that a man lay down his life for his friends." John 15:13

The Neo-Templars express the following as their guiding principles: "to protect the interests of all free, indigenous Europeans, European cultures and Christendom in general through armed struggle." Clearly, the Neo-Templar's first priority is protecting the material interests of Europeans, this is often the case with irreligious conservatives on both sides of the Atlantic.

If they meant anything other than the material well being of Europe, they would not have found it necessary to list protecting the cultures second and Christendom last. No true Christian ever puts Christ last in any list of motivators.

Equally explicit is that they are not truly interested in protecting the interests of "ALL" free indigenous Europeans. As displayed by Brevik's willingness to take the lives of some 90 indigenous European people, no small number being children. In America at least, a Conservative's primary material interest is life and it is the first of the unalienable rights mentioned in our Constitution as being endowed by God.

Nevertheless, the description of the the Neo-Templar movement goes on aping Islamic extremist rhetoric:

"The Order and Tribunal has concluded that any and all Europeans have not just a right, but a duty to resist through political and military means; cultural Marxist/multiculturalist atrocities and crimes committed against the indigenous peoples of Europe."

You resist by launching your own atrocities? This sounds more akin to what is taught in the Qur'an:

In the Holy Bible there are no similar instructions calling Christians to fight. The manifesto continues:

"As such, any European Christian conservative can act as a Justiciar Knight. This includes Christian agnostics and Christian atheists. Although the

PCCTS, Knights Templar is a pan-European indigenous rights movement we give all Europeans, regardless of skin colour, the opportunity to become a Justiciar Knight as long as the individual is either a Christian, Christian agnostic or a Christian atheist."

Statements like the last few, reveal the utter lack of a Christian spiritual component to the Neo-Templar movement. However, there is a spirit driving these ersatz Templars — it just isn't from God. The Holy Bible defines what a Christian is and is not, any other definition is human in origin and, therefore, temporal not spiritual.

The Apostle in Romans 3:8 categorically, absolutely denies the lawfulness of doing evil, any evil, expecting that good can result from it, anyone making such claims in their actions can expect only damnation.

"And not rather, (as we be slanderously reported, and as some affirm that we say,) Let us do evil, that good may come? whose damnation is just."

These Neo-Templars make quick shrift of their ignorance of Christianity if they truly hold to what Breivik reveals in his manifesto. When they speak of Christian Atheists and Agnostics, I can only imagine that they mean secular individuals who cannot deny the practical nature of advancing the Christian ethos in an orderly society even while denying the God who inspired that ethos. Anything else would be by any interpretation patently absurd.

As Romans chapter three continues, in verses 12-16 we find an apt portrait of those who would act as Brevik acted:

"They are all gone out of the way, they are together become unprofitable; there is none that doeth good, no, not one. Their throat is an open sepulchre; with their tongues they have used deceit; the poison of asps is under their lips: Whose mouth is full of cursing and bitterness: Their feet are swift to shed blood: Destruction and misery are in their ways:"

If this is not a leftist plot to make conservatism and Christianity look bad, then it is likely the result of, as I mentioned in my article, "Bondage of Corruption Pt. 2: American Taliban", a case of co-opting terms.

In that article I explain that ideas and groups like the Knights Templar can : "...manifest quite often in a twisting of terms and words. Shallow thinking coupled with what often seems disdain for the true meaning of words (or the true function of a historical group) gives rise to malformed concepts."

Breivik and those who identify with him in co-opting the Knights Templar, in modern times, are the dangerous exemplars of a younger generation completely indifferent to the realities of what they emulate or celebrate. I am reminded of the young guys who don Guy Fawkes masks because they liked the "V for Vendetta" comic book or movie — adopting Guy Fawkes as the symbol of rebellion.

In reality, Fawkes and his confederates were tools of the Catholic Church and terrorists who plotted to kill hundreds of people (by blowing up Parliament in full session) to kill King James the I, because they opposed his making Holy Scripture available to the masses and his Protestant resistance to the papacy.

Fawkes was the ultimate manifestation of oppression and establishmentarianism.

Or leftist kids who revere Che Guevara even though he was a murderer who essentially opposed everything they love. If Che and his form of economic Marxism had prevailed, they would not have there much beloved iPods and Wii game systems.

I have received friend requests on Facebook from a great many young folks, mostly Europeans that have as their profile picture some iteration of the Crusader's cross in the past few weeks. It is my sincere prayer that these young folks are not aligned with Breivik's ideology. If they are I would ask them to consider this:

The Hospitallers, the Templars and all the other Crusaders did not take vows to stay at home to kill their fellows who disagreed with their ideas of what Europe ought to be, that was not their idea of fighting for their fellow Europeans rights, culture and Christendom. They didn't dress like trusted policemen only to open fire on defenseless children. Instead, these crusaders took the fight to the attacking enemies face wearing the cross proudly!

And for God's sake, leave Christ out of this sort of foolishness. He is big enough and God enough to deal with evil on His own terms. That is what real Christian faith demands. This does not mean you cannot defend yourself when attacked, or oppose evil when need be, but you have to know that God wants you to leave children at camp having innocent fun alone.

"Dearly beloved, avenge not yourselves, but rather give place unto wrath: for it is written, Vengeance is mine; I will repay, saith the Lord." Romans 12:19