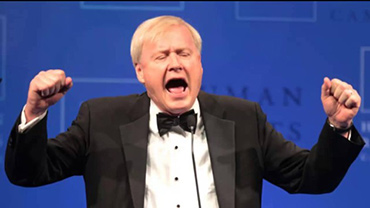 "I'll just tell you one thing and I'm speaking now for all white people but especially those who have tried to change in the last 50 or 60 years – and a lot of them have really tried to change – I'm sorry for this stuff. That's all I'm saying."

I am sure there will be many commentaries from the right this weekend opening with Chris Matthews' self-righteous apology on behalf of "all white people" for the incidents of racial profiling black men have had to endure in the United States. As a Christian American black man, I feel the need to respond individually to Mr. Matthews: You can keep it! I am not interested in empty gestures.

"But let every man prove his own work, and then shall he have rejoicing in himself alone, and not in another. For every man shall bear his own burden." Galatians 6:4,5

I am perfectly willing to accept such an apology from Mr. Matthews on behalf of himself if he is directly responsible for wrongfully profiling black folks. But to think he can offer contrition or even remediation for the prejudices of others speaks to the messianic self-image far too many leftists suffer from and a fundamental lack of understanding of what it means to be a responsible person and an American.

This is a result of a collectivist mindset, socialist proclivities that at their very root reject the Biblical concept of personal responsibility, while at the same time intimating that men like Matthews are better than others morally. Matthews is saying: I know you have tried to elevate yourselves bless your hearts, though you may not be there yet, I am!

I should think one would be hard pressed to find a more diabolical example of conceit. The Bible passages from Galatians 6 quoted above are an example of many affirming the idea a man must account for his own actions and only his actions and again a quintessential aspect of American Republicanism culled from the Word of God. The first 3 verses in chapter 6 describe the snare men like Chris Matthews fall into and give verses 4 and 5 their context, v1-3:

"Brethren, if a man be overtaken in a fault, ye which are spiritual, restore such an one in the spirit of meekness; considering thyself, lest thou also be tempted. Bear ye one another's burdens, and so fulfil the law of Christ.

For if a man think himself to be something, when he is nothing, he deceiveth himself."

Here we have the formula for avoiding and not indulging one's personal conceit and self-righteousness. We are told to exercise forbearance regarding our fellow travellers, who do the wrong thing, not to look upon ourselves as having more wisdom and therefore fit to dictate to others. Those who do, deceive themselves with empty gestures like Matthew's blanket apology, folly which will never make him rise in the estimation of truly moral and thinking men and certainly not the God of the Holy Bible, that is if you are to believe what God reveals about His character.

Only Christ was fit to serve as a ransom for the sins of others, not fallen men overburdened with our own sins. Does racial profiling exist? Certainly. Is it a great evil? Well that depends.

There is a reason God admonishes us to: "Abstain from all appearance of evil." In other words if you do not want to be mistaken for a wrong doer, don't imitate wrong doers. If you are not in fact a gangster, why would you want to look like one whether it be in social media or the real world? In fact, it is your duty not to.

I have no problem with the authorities checking me out if a short, fat middle-aged black guy just robbed a bank in my general proximity. It's simple enough to prove who I am and where I have been. But I do not like the idea of being followed as a matter of policy just because I happen to be black. That being said, it is what it is.

The idea we can't look for types when a particular type of crime is committed or is suspected of being committed by a consistent type like terrorism or breaking and entering in a certain area is patently absurd. Sadly too many young people in the black community celebrate and unfortunately propagate negative images.

As long as there are people in the world there will be prejudice. But to suggest that people should not or will not be judged by appearances belies the lessons we teach our children to be mindful of the company they keep and the image they project.

"Make no friendship with an angry man; and with a furious man thou shalt not go: Lest thou learn his ways, and get a snare to thy soul." Proverbs 22:24,25

Profiling has been around a lot longer than the United States of America and to suggest it is peculiar to our place and time speaks directly to liberal hypocrisy and the victimhood mentality they work tirelessly to cultivate amongst the people they exploit.