December 29, 2013
Interesting, with A&E lifting the suspension on Phil Robertson and the Gay Lobby losing their bid to see him silenced – the liberal media has begun framing the aftermath, leading with: "...comments made by Robertson about AFRICAN AMERICANS and homosexuality..." 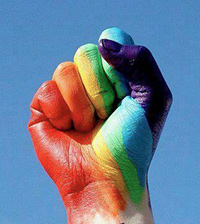 Suddenly black folks are getting the lead emphasis, when before, the Duck Dynasty star's comments about race in the GQ Magazine interview which sparked the controversy, where rarely mentioned, if mentioned at all, but never first. When Robertson's ham-fisted and misguided observations on the Jim Crow South were referenced, it was an aside: "And don't forget what he said about black folks."

Racism against black folks, ever the fallback position for leftists when the more important issue to them has failed to achieve the desired result. Of the two groups, the one currently enjoying primacy on the left is obvious. Particularly when you consider President Obama, the head of the party, has spent far more time and energy addressing the LBGT agenda, than the issues plaguing the black community.

We even see: "Obama Addresses LGBT Community During Morehouse College Graduation." It seems, as pointed out by The Huffington Post; "President Barack Obama made sure that his speech during the spring 2013 commencement ceremony at Georgia's Morehouse College was inclusive.

The Atlanta-based historically black private college is exclusively for men, but Obama spontaneously referenced gay and lesbian Americans, as The Advocate notes."

So even while delivering a commencement speech at a historically black college, the President fit the LGBT agenda into the mix – but I didn't find references to the issues hampering the advancement of the black community peppered into his exclusive addresses to the LGBT community. Heck, you will even see: "First Lady Michelle Obama To Address LGBT DNC Luncheon." These were all pulled from the top of the results and all just from 2013.

At the bottom of the page I found: "Obama addresses 'crisis' of absent fathers in the black community," an article appearing on The Grio dated 2009 – But it was not a specific address, just a mention made in the midst of an address given on the importance of fatherhood in America in general, not the pandemic illegitimate birth rate that has achieved the status of "New Normal" in the black community. It's also worth noting this web hit came ironically after one entitled: "Obama Addresses Homophobia, Anti-Semitism and Xenophobia Among Black Americans" – You can't make this stuff up.

(Full disclosure, I Binged instead of Googled, but Binged has not yet reached the same status in the American Lexicon.)

Here's the point of this article and it is meant primarily for Black Democrats. The President is in fact not the president of black people exclusively – nor do I wish him to be. However I do not think anyone would begrudge the first black president the unique opportunity to use his influence to actually go and specifically address an audience of black folks and speak frankly about our issues. Especially our youth!

I don't mean a sound bite in the midst of his usual soaring rhetoric on conceptual inequality and social justice delivered before the General Assembly – I mean visiting schools in the inner city from time to time, in problematical urban centers, the President vis-à-vis the youth, admonishing them to stop attacking people in the street, educate themselves, cease haphazardly making babies – Put a halt to the behavior grinding our communities into self-perpetuating misery pits.

Just the attempt would be appreciated – I'll take the rhetoric at this point in lieu of indifference or leftist solutions, if it is targeted. The President can't offer real answers, because the only answers on a scale great enough to address and effect real and lasting "Change" in the inner city, or even the country on the whole, run counter to his ideology – The ideology incidentally most responsible for the very issues he would be confronting.

The real solutions have a spiritual and moral foundation – without which you can't "Hope" to find temporal answers. That sort of thinking is anathema to Democrats and leftists in general. Hence the reason so much stress is made on advancing the LGBT agenda – it's one more brick removed from our nation's moral foundation. The LGBT agenda represents another thumb in the eye of the Immutable Source undergirding our Republic's values.

And why call ye me, Lord, Lord, and do not the things which I say?

Whosoever cometh to me, and heareth my sayings, and doeth them, I will shew you to whom he is like:

He is like a man which built an house, and digged deep, and laid the foundation on a rock: and when the flood arose, the stream beat vehemently upon that house, and could not shake it: for it was founded upon a rock.

But he that heareth, and doeth not, is like a man that without a foundation built an house upon the earth; against which the stream did beat vehemently, and immediately it fell; and the ruin of that house was great. Luke 6:45-49

A good man does not advocate tirelessly for behavior God calls sin, while virtually ignoring the other sins he finds too mundane, or problematical to address. Sins tearing the inner cities apart. When will the black community wake up to the realities of the soft, ever eroding ground the Democrats build on? How much more decay in our communities do you have to see? Does the house need to collapse on our heads before we realize it's time to get out?

Comment on LGBT is the New Black Power here.

You can like the Digital Publius FB Page by clicking here.