Hassan Nurullah
The impotency of sticks and stones

December 21, 2013
Earlier this week, on Facebook I posted this status update:

If you are prone to using terms like Moochelle when referring to Mrs. Obama, or President Zero, Odumbo, Obummer or any other names other than President or Mr. Obama – I will thank you not to do so on my wall or in one of my threads – I am no fan of President Obama and his policies, but I strive to conduct myself in a manner above that sort of thing. I don't have time to waste explaining your ignorance whilst doing battle with the ignorance on the left. 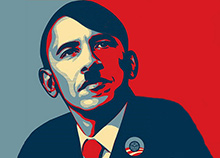 I would remind those who would say stupid things like: "The liberals don't keep it civil so why should I?"

"Make no friendship with an angry man; and with a furious man thou shalt not go: Lest thou learn his ways, and get a snare to thy soul." Proverbs 22:24,25

That is a passage I find myself employing more and more these days, both for a reminder to myself and in conversations with nice people now very angry as the left's policies wreak havoc across the American landscape. It is exceedingly difficult to maintain civility in the face of the Democrats and the left in general's epic indifference to the concept. Later in the tread I posted:

"Bless them that curse you, and pray for them which despitefully use you." Luke 6:28

That IS a hard saying – but it is what the Lord called Christians to do – It doesn't mean we should not fight against our enemies – We are to "be angry, but sin not!"

An FB friend named Keith asked this question later in the virtual conversation: "Okay, so SAY I agree with you. Where exactly does that get you in the fight to save the republic? I think we need swords not saucers. What think you?"

Those who have followed Digital Publius for a while know, that on occasion I will turn a discussion I had somewhere online into a subject I will share here – This generally occurs if I find my answer to someone's question takes more than a couple of paragraphs in a comment section, followed by the inspiration the subject is important enough to share more broadly. Such was the case with Keith's very good question. My response:

I am a big fan of swords Keith, but I know I don't have to debase myself when using one when battling the enemy! I don't have to lower myself to be like them, to hate like them! I actually own swords (And in this day more importantly guns,) But my Sword of choice is the living Word of God – it is sharper than any two edged sword and as the kerfuffle with Duck Dynasty's Phil Robertson proves, is far more offensive to the enemy than any insult my severely limited brain can throw at them. (Incidentally, the Scriptures as Phil paraphrased don't merely equate homosexuality with bestiality, they also equate plain old-fashioned fornication and adultery with that repugnant act, GLAAD seemed to miss that.)

What do you think the left hates more – someone calling the President Obummer or showing them where President Obama's policies conflict with the teachings of God? The left takes your use of Obummer, laughs at you and calls you an idiot and racist – but it cuts them to their very souls and makes them blow a gasket when you tell them they are against God. Nothing provokes the left like comparing their morality with God's truth revealed in the Holy Bible. This loses power though when you then turn and act as they do.

Jim Crow laws were ended not because those fighting against them used better insults in an attempt to demean the enemy. Let the enemy demean themselves then highlight it. As long as we act like they do, there is no way for people to discern a difference between our conflicting paradigms – as it stands right now you have people in the middle who see both sides acting and looking exactly the same. Hard to examine results coldly and logically for bystanders, when both sides are equally revolting in their behavior.

It wasn't Malcolm X's "By any means necessary" that won the Civil Rights movement if I may again use it as an example. It was people highlighting the bestial cruelty of the Jim Crow laws and the hideous visage of those who maintained the institution, in strong contrast to those taking the high road that won out. It may not be as much fun or as viscerally appealing, but it damn sure takes a great deal more intelligence and courage.

I am a firm believer in the idea of fighting fire with fire. However, your fire does not have to be the same as the fire employed by the enemy. We ought not limit our definition of equal or greater force to the same kind of force. I would argue; Godly integrity is the greatest force we can bring to bear in this battle for our nation's soul – It's like pitting their sticks and stones against an A-bomb.

I would much prefer losing a temporal battle that by its very definition is temporary, than to lose the spiritual battle that has eternal consequences for all involved. Whatever the outcome, I like our chances in the end standing before my God after having taken the high road.

"Having your conversation honest among the Gentiles: that, whereas they speak against you as evildoers, they may by your good works, which they shall behold, glorify God in the day of visitation." I Peter 2:12

Comment on Culture War: The Impotency of Sticks and Stones here.

You can like the Digital Publius FB Page by clicking here.