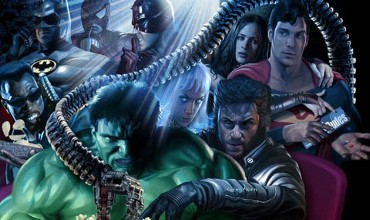 Most people don't read comic books, never have, never will. Most people look at Superman and ask, "Why can't everyone see that Superman is just Clark Kent without the glasses?" So when a person who doesn't really like Superman makes a Superman move, he makes sure to show that in the "real world " Lois Lane would have no problem discovering Superman's identity, getting the full story on her own with very little effort.

This may in fact be more realistic, but it sure isn't any fun, that is unless your name happens to be Diogenes. I never picked up a superhero comic book expecting to find anything remotely related to the real world – that's rather the point of superheroes. This should be OK, but it isn't.

Hollywood reinforces the notion with every superhero film they make, that superheroes are intrinsically silly, so we will change them so they can be more readily accessible for a wider audience. I have no problem with this attitude, I would just prefer you apply it to your own creations.

If you think it's absurd that Oliver Queen calls himself Green Arrow, then create your own urban crime-fighting archer and call him "The Hood" or the "Vigilante." But if you are going to do Green Arrow do Green Arrow. You are after all counting on me as a fan of Green Arrow to watch the show. Green Arrow has been around as long as he has, because people like Green Arrow, not the Hood.

It is Hollywood's way of trading on beloved character's brands while denouncing the genre. No other industry allows their brands to be similarly misused. You can't be a bottler in Detroit who decides to change the formula of Coca Cola because you think the general public will like your formula more and still put it in a Coke bottle.

Just as a person who buys a bottle of Coke expects Coke – A comic book fan wants to get the Mandarin he grew up reading about when he goes to see Iron Man 3 not an out of work drunken British actor with no powers. You see, Hollywood really thinks people go to see a superhero movie because they care who plays Iron Man.

That's why they don't put Jeremy Renner in a mask when he plays Hawkeye or they choose not to put a helmet on Thor. It's why they continuously have heroes unmasked in every movie and why most of the time Iron Man has his mask flipped up so we know that Downey is playing Tony Stark. or we see his face inside the helmet constantly in the middle of every fight scene.

It's not that Hollywood has a problem with asking movie patrons to suspend belief. We watch cars do things in the latest iteration of Fast and Furious that defy physics and the survivability of the person behind the wheel – They didn't care if people thought it silly that Neo could learn Kung Fu by plugging him into a computer via a spiked USB cord that would destroy his brain stem and probably sever his spinal cord and there seems to be a lot of room between the mask and Tony Stark's face.

No, the biggest problem Hollywood has with comic book superheroes is that they are not their own idea, so each director's ego follows it's own prime directive to leave a mark of their own on characters already fully fleshed out.

When you make Spiderman's webbing organic and not a brilliant feat of chemistry combined with mechanical engineering, you downplay one of Peter Parkers most important characteristics, his incredible genius and wherewithal. It was that very genius that leads him to the science exhibition, which lead to his encounter with the radioactive spider in the first place.

But what guides the disdain for comic book superheroes in film and even in the contemporary comics themselves – is the concept of hope they represent. No character embodies hope and wholesome American idealism more than Superman so they had to darken him up.

Liberalism makes much ado about "hope"; they just can't stand it in the framework of hope attached to a set morality. They particularly abhor the idea of hope tied to faith or patriotism – So Superman can no longer represent "Truth, Justice and the American Way," but rather a nebulous ill defined hope unattached to any real philosophy...a sort of hope...ishness. Hollywood likes the idea of hope, just don't tell them what hope is.

As a life long comic book purist, I loathe the overwhelming majority of the comic book based movies Hollywood produces. The audience for these films fall into two categories: Those of us who love superhero comic books and those of you who could not care less about comics or their history, you go because they are there.

The latter may manifest in a person just wanting to see the latest blockbuster, your boyfriend dragged you, or whatever motivates a person to see any other movie, maybe you like popcorn in the dark.

I am an unapologetic nerd! I never hid the fact that I loved comic books from girls or anyone else – I had friends who would shush me if we were talking comics and a girl walked up. Meanwhile I was never at a loss for attractive female companionship in my single days. It didn't hurt that I was co- owner of three comic book stores back then, you see, we turned our obsession into a business, girls like that sort of thing.

Most of the filmgoers have no idea why these movies are bad in the purist's view, it is just a spectacle, lots of special effects and explosions... You don't know that Batman would never give up being Batman because some villain made a threat as portrayed in Dark Knight. But I freely confess I find it perplexing that someone can claim to love the superheroes they grew up with while offering apologetics on behalf of filmmakers who utterly mutilate them.

Superheroes, invented during some of the darkest periods in America's history, the Great Depression, World War Two... were created as an escape from reality featuring characters representing what was best in America, the ideal and the hope that whatever crisis we faced, ultimately good and the USA would eventually prevail. You didn't become evil to vanquish evil – you overcame evil and you found a way to do it with honor. It may not have been realistic but it was good and it was inspiring. When did striving to reach an ideal become quant and old fashioned?

What are bloodthirsty characters like Wolverine and The Punisher with their gritty realism inspiring in our kids? When you saw the bad guy in the comics I grew up with being lead away in chains courtesy of "Your friendly neighborhood Spiderman." Or a villain meeting his just desserts after falling victim to his own scheme, justice had been served and it reinforced the rule of law as a worthy notion.

We now live in a period where the ends justify the means. This is a very deadly state to be in when the "Ends" and what we seek to accomplish, are so poorly defined. So I reckon a Man of Steel who summarily snaps the neck of the bad guy is precisely what we should expect from a culture that thinks hope springs from pretty speeches and rhetoric, as opposed to immutable ideals and unalienable rights granted to all by a Creator. Now we look to privileges dolled out by flawed men.

The Disciples of Christ were falsely accused of lying to spread the gospel and the question was asked whether this was OK if it leads people to the truth of God? The answer was concise:

What if some were unfaithful? Will their unfaithfulness nullify God's faithfulness? Not at all! Let God be true, and every human being a liar. As it is written:

"So that you may be proved right when you speak and prevail when you judge."

But if our unrighteousness brings out God's righteousness more clearly, what shall we say? That God is unjust in bringing his wrath on us? (I am using a human argument.) Certainly not! If that were so, how could God judge the world? Someone might argue, "If my falsehood enhances God's truthfulness and so increases his glory, why am I still condemned as a sinner?" 8 Why not say – as some slanderously claim that we say – "Let us do evil that good may result"? Their condemnation is just! Romans 3:3-8

These are the values I would prefer my kids were exposed to, and that is the morality heroes like Superman used to represent, not the relativistic Bizarro world Superman of the new hope paradigm. Why is it suddenly wrong to hold up the ideal? Why does a guy with a red cape, an "S" on his chest who flies need to reflect the real world? That the question needs asking is what is truly absurd and breathtakingly sad.