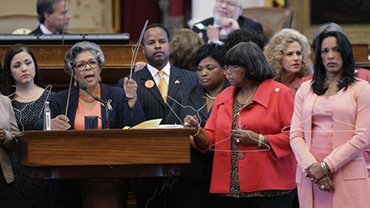 In the Texas State House today, they will be putting tough new laws restricting abortion in the "Lone Star" state to a vote. As I read about the debates held on the state's House floor yesterday, I was not surprised to see the accompanying optics featured a tight shot of mostly black Texas Democrats advocating for "Women's Health" brandishing coat hangers, knitting needles, turpentine and oddly enough a large feather.

More often than not, when you have an article or story presented focusing on abortion, you will see black folks featured in the optics rather than whites. This is by design. There is no issue facing the American people more tied to an attitude of victimization than abortion rights and there is no more powerful symbol of victimhood in America than black folks.

So what you see on CSPAN or news shows covering these debates are speeches given by the likes of Sheila Jackson Lee, or Rep. Eleanor Norton bemoaning the attack on women's health. The Right Reverend Al Sharpton and other liberal black men enter the fray as well.

Clicking on Sharpton's name above will take you to a link demonstrating how they will use black folks to advance the emotional appeal and then bring in a white woman to give the "rational" perspective on the need to protect "Choice" at all costs.

I have to admit, the props were a new twist though, and it was these household implements, long tied to the images of back alley abortions painted by the advocates for abortion on demand that most got my juices flowing. It occurred to me that they may be against the use of these crude tools by the untrained, but they are in fact not all that different from the more refined instruments used by physicians to obtain the exact same goal – the destruction of human life.

You see the victim in this scenario is never the child robbed of the most sacred of inalienable rights, life itself, but rather the mother who in making the choice to kill her child puts her own health at risk at the same time. She is the victim of the back alley abortion, not the child. She is driven to the extreme of seeking a hand proficient at using large feathers and turpentine to kill her baby when she should be terminating her unborn child in a sterile environment with the aid of a professional killer.

This is the ultimate triumph of the racist Democrat party – they have got black folks advocating for the right to kill ourselves – to destroy our own babies! Somehow these people really think it is better a woman kills her child using a doctor than to kill her child with a coat hanger. It's about the health of the mother, but who cares about the health of the children they kill?

Using a doctor to perform the procedure is like a neutron bomb that leaves the building standing while killing the inhabitants. When one considers the disproportionate number of abortions performed on black women killing black babies, it reminds me of the watermelon bomb men from my father's generation used to say white folks were working on. A weapon designed to kill black folks while leaving whites relatively unscathed.

People like Rep. Diana DeGette are the modern day Margaret Sanger's who stood before crowds extolling the virtues of population control amongst certain peoples while using men like W.E.B. Du Bois and other prominent Black leaders and preachers to remove the fear from minorities that they were in fact being targeted for genocide.

Du Bois, in his article "Black Folks and Birth Control" clearly established the true nature of the debate when he stated there would be an: "inevitable clash of ideals between those Negroes who were striving to improve their economic position and those whose religious faith made the limitation of children a sin." Al Sharpton and his ilk have taken up the same position today.

"For we wrestle not against flesh and blood, but against principalities, against powers, against the rulers of the darkness of this world, against spiritual wickedness in high places." Ephesians 6:12

Sanger's "Negro Project" is alive and well. Satan has always been in the business of destroying people as early as possible by convincing the people themselves it's the right thing to do – he is marvelously adept. Whether he is whispering in the ear of the ancient worshippers of Molech, or Pharaoh, Herod and Barrack Obama, the result is the same, they all call for unrestricted infanticide.

This is not strictly a black issue, abortion is as ugly a stain on the fabric of our nation as slavery ever was, in fact it is worse – it effects everyone and reaches out to destroy without regard to ethnicity. That Satan has convinced so many that expedience whether it be economic, social or just plain "Choice" is more important than human life is a tragedy of Biblical proportions.

But just as Pharaoh brought down condemnation on his own house when he called for the death of Israel's first born, so too will all of these advocates for the modern day version meet their just rewards by and by.

The left has their soft neutron bombs dispatched, blitzing cities like Detroit, East St. Louis and Los Angeles, but we know who wins in the end and how best to prosecute this war for the soul of the nation.

"For though we walk in the flesh, we do not war after the flesh: (For the weapons of our warfare are not carnal, but mighty through God to the pulling down of strong holds;)" II Corinthians 10:3,4