October 18, 2011
In the last century, the United States of America sacrificed more than 400,000 of our young men fighting against Japan and the evil of Germany's National Socialism. America lost another 100,000 or so stopping the encroachment of Sino-Soviet style socialism in both hot and cold wars. 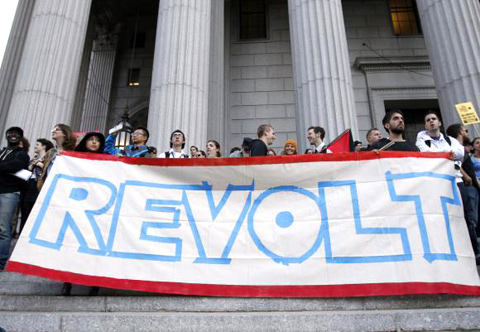 There is not a single political philosophy responsible for more human carnage than socialism. Leftist ideologies, whether you call it fascism, socialism or communism, are directly responsible for the slaughter of millions in just a single century. Let's look at the tally of deaths resulting from socialist revolutions.

Those are just the big boys, that count doesn't include Tito, Fidel Castro and Ernesto "Che" Guevara or any of the other tin pot socialist dictator's atrocities. Good thing that a great deal of the "revolution" was indeed not televised.

The left, particularly in academia, has worked wonders in distancing themselves from the barbarism their ideology inevitably led and continues to lead to, especially fascism. Despite the overwhelming support German and Italian fascism received from Western leftist progressives like H.G. Wells, NAACP founder W.E.B. DuBois, George Bernard Shaw, Will Rogers and Rexford Guy Tugwell, to name a few, the left has managed to somehow repaint fascism as a right wing philosophy.

The leftist progressives fell all over themselves in praise for Lenin, Stalin, Hitler and Ol' Il Duce...until the slaughter began. W.E.B. DuBois declared that the National Socialist Party (Nazis) takeover of Germany was: "absolutely necessary to get the state in order." Further Dubois wrote from Russia to the readers of his magazine 'The Crisis":

"I stand in astonishment and wonder at the revelation of Russia that has come to me. I may be partially deceived and half-informed. But if what I have seen with my eyes and heard with my ears in Russia is Bolshevism, I am a Bolshevik."

As DuBois later condemned Nazism's extremes and lamented the deaths caused by the revolutions he had praised earlier, it was clear that he was indeed both deceived and ill-informed.

After a visit to Italy, Will Rogers said of Mussolini: "I'm pretty high on that bird."

How are erstwhile political dilettantes like Rogers and DuBois any different from their contemporary progeny? Doesn't Sean Penn's praise of Venezuelan Dictator Hugo Chavez sound eerily similar to Will Roger's praise of Il Duce? Is the solidarity shown by "progressives" like President Obama and Nancy Pelosi with the neo-pinko Occupy Wall Street throng any different than DuBois declaring himself a Bolshevik?

I would have to say that the biggest difference has to be that the modern day progressive has the luxury of hindsight. History is a very useful thing to have — unless, out of either ignorance or hubris, you ignore it. And that is what we are seeing today. Some are willingly ignorant, others are simply evil.

Well the modern day Nazis and Communists have thrown their collective lots in with the Occupy Wall Street protestors. The Nazis because just like the National Socialist movement of Nazi Germany included an anti-semitic element, the same element is also present in the Occupy protests. And you don't see the anti-semites being universally denounced or made to feel unwelcome by their fellow protestors.

The neo-nazi groups are saying since there is already anti-Jewish literature and rhetoric being preached at these rallies, they should remove the more offensive symbolism of the Nazi movement and join the Wall Street protests with watered down versions of their more inflammatory fare. Apparently this was issued by a nazi group in Westland Michigan just in time for the Detroit Occupy protest.

If socialism is such a good idea, why does it inspire so much death and destruction? You can see the modern progressives twisting history to the applause of the again, unthinking, ill-informed herd in this video .

Liberals feverishly try to draw a moral equivalency between the Tea Party and the Occupy Wall Street crowd. But you don't see the Nazis and the Commies issuing pleas for their followers to join the Tea Party. You can't shout racist, anti-Semitic or anti-American rhetoric at a Tea Party gathering.

Those who do are on the other side of barricades conducting anti-Tea Party rallies. Despite liberal attempts to call the Tea Party racist, those are the facts.

"Be not deceived: evil communications corrupt good manners" I Corinthians 15:33

The Greek word translated into the phrase "evil communications" is "homilia," "companionship," i.e. (by implication) intercourse: — communication. This is from the Greek word "homilos" (meaning a crowd); association together, i.e. a multitude: — company.

In other words, associating with the wrong crowd corrupts (often making a person act counter to their character by being engulfed in reactionary herd thinking) the way others perceive you and whatever message you may be trying to convey. This simple Biblical tenet is often taught to children by good parents. Be careful of the people you hang around with, because bad behavior tends to rub off.

I have seen Christians promoting these Occupy Wall Street rallies. I cannot for the life of me figure out why. Were we wrong to oppose the Nazis and the Communists for the better part of a century? Don't you think it odd that Christians find themselves aligned with people holding anti-life political philosophies?

I am reminded of the words of my Lord in the Gospel of Matthew when His detractors tried to blame His actions on the devil:

How do we cure the ills of our nation by embracing and adopting the failed and murderous philosophies of our enemies? The answer is simple: You can't. Socialism has wrought only misery whenever and wherever it has been tried. Without regard to nomenclature, make no mistake that is what hides behind these protests. Christ continued in verse 26:

"And if Satan cast out Satan, he is divided against himself; how shall then his kingdom stand?"

If you are a Christian at an occupy protest and socialists are all around you, ask yourself why the teachings of Christ are done away with in socialist nations? If capitalism is evil, why does Christ teach the principals undergirding capitalism over and over again in Scripture, likening them to His kingdom? Read Luke 19:11-27 or the parable of the "talents" Matthew 25:14-30. Or the "laborers in the vineyard" were Jesus Christ begins:

For the kingdom of heaven is like unto a man that is an householder, which went out early in the morning to hire labourers into his vineyard. Matthew 20:1

You could just as easily change the word householder to capitalist or businessman: For the kingdom of heaven is like unto a man that is a capitalist... As with all things of importance taught by Christ — there is both a practical and a spiritual application. The practical in this verse is that God describes His kingdom as one which rewards industry. That's how America used to be and should always be — a country that rewards the industrious.

I made this statement on my Facebook fan page and on Freedom Torch: "America doesn't need revolution, just a truly well informed electorate not blinded by misleading rhetoric. In the United States change comes with a vote not rioting." You do not get socialist revolutions, like the ones being called for by far too many of the Occupy Wall Street crowd without blood.

For the Christians yoking yourselves to these "Occupy" people I ask you to remember:

"Examine yourselves, whether ye be in the faith; prove your own selves. Know ye not your own selves, how that Jesus Christ is in you, except ye be reprobates?" II Corinthians 13:5

If you believe our system is wrong, do you really think standing with Nazis, Communists and people fornicating in the streets — defecating on police cars and all sorts of reprobate behavior is the right way to go?

If our system is evil, how does Satan cast out Satan? Again; "Bad company ruins good morals."