Hassan Nurullah
We are far from Him

December 1, 2011
During a discussion sparked by my article "The Party Poopers" a fellow named Dave said:

Yeah, I know — God works in mysterious ways... and, we are all wasting time struggling over all of this, because it is all part of God's plan, and he will save America in the end... we have nothing to worry about. 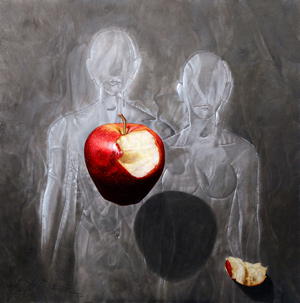 I don't think God is going to save America at all Dave. I think America abandoned God a long time ago, and if He spares us — an unrepentant America — He has to apologize to Sodom and Gomorrah. That an ungodly man like Barack Obama could be elected in the first place says a lot about America's spiritual state to begin with.

America has the present culture and political climate it deserves. We are all responsible for the depraved condition of our land. We gave Satan rule. Step by step, little things like the Federal Reserve Act, which invited Luciferian style banking to control our lives.

The secularization of our culture and institutions, is being driven by people who have never stopped to wonder: 'if the Founders intended for God to be eliminated from the public square, why did they allow Him there in the first place?' We have politicians, judges and academics today that are convinced they understand what the Founders intended better than they did.

Someone may or may not offer a token blessing over the food, giving God a one-minute token of appreciation. But the moment the table says Amen; it's pass the gravy and what's the score? And God does not enter your thoughts again that evening. Unless of course you almost have a traffic accident on the way home, then His name suddenly comes to mind.

More often than not in modern America, on Thanksgiving not only are we not thinking about God's mercy usward, we are far more likely planning our foray into the world of excess the following day. America has added 'Black Friday" to the societal lexicon. Black Friday has become the day a person who already owns several TVs, will camp out to get another one just because it's so darn cheap.

Hands trembling, sipping hot chocolate from disposable cups, a man guards his 10th spot in line jealously. Only to find when the doors happily open in a wee hour of the morning, the store only had eight TVs at the bargain price.

This is a bitter pill to swallow after you have risked frostbite and the threat of being trampled to death on a fool's errand. No wonder people come armed with pepper spray and women fight over cut-rate scarves and two-dollar frying pans. After all Christmas is just around the corner and my sister would look great in that scarf!

Black Friday was not good enough, now with the rise of our digital addiction, we have added "Cyber Monday." This is how the ill-fated Mr. Numberteninline can achieve his awaited recompense after his failed and chilly big box store vigil. He can get his TV online with a click on save to cart and voila! He even gets free shipping because he spent over two hundred dollars.

Our hero, then ponders what all those who were too groggy from Tryptophan induced food comas already knew when they slept in on Friday morning: "Why brave the cold for hours on end and crazed bread maker shoppers, when I can shop from the comfort of my home?" Mr. Numberteninline chuckles to himself and ironically thanks God for the internet...he'll get that sixth TV earmarked for the bathroom.

On that TV, as he basks in the tub, he will be entertained by murders, adultery, children disobedient to parents, greed, envy, all sandwiched between ads for breakfast cereals and more sales leading to the upcoming Christmas season, where all can again gleefully ignore God on another holiday that is supposed to honor Him.   We sing, carry key chains and emblazon on tee shirts the words "God Bless America," when the idea that should be flowing from our hearts and sold to the world ought to be "America Bless God."

Verily, verily, I say unto you, He that believeth on me, the works that I do shall he do also; and greater works than these shall he do; because I go unto my Father. And whatsoever ye shall ask in my name, that will I do, that the Father may be glorified in the Son. If ye shall ask any thing in my name, I will do it. If ye love me, keep my commandments. John 14:12-15

We are a blessing to God when we are obedient to Him — we need to bless God! It is from this position that His blessings rain down on us.

The state of American politics like our reverence for the Divine Providence the Founders so often praised and thanked, has reached a most discouraging point. The candidates we favor are defamed to a point that even if they are innocent and vindicated the damage has already been irrevocably done.   And we click our tongues and say: 'That is why we can't get a good person to run'. When the candidate is actually guilty, we again click our tongues and lament that we have no honorable public servants.

If as the Democrats believe, there is no place for God in the public square, from whence does our collective morality spring? Why should it matter if a man keeps his wedding vows? What purpose does marriage serve at all?

To the believer, marriage is a sacrament instituted by God, to use as a foundation for building healthy, Godly societies. It is therefore a good thing.

The secularist who bases his morality on his own personal ethos is forced to ponder whether marriage is good because it has value? Or does marriage have value because it is good? The way he answers those questions will fluctuate according to his own situational desires. This is not a stable position to build a healthy society on.

Faith in man is not enough; we have history ever poised to testify to that truth. Man is inconstant and so are his values when not buttressed by a faith in God. No, the source of values must be immutable; otherwise they cannot be trusted not to change with fashion, therefore undermining societal stability.

The secular argument that a society will ultimately not change it's morality because it will do harm to itself by doing so doesn't quite hold up. Not when you consider for example, the humanistic leftist powers that be in Beijing thought it was good for society to slaughter tens of millions of Chinese and then they stopped. Until they start again.

This is the same sort of reasoning that spurs the Democrat party and the liberal left. The Democrats fight with the zeal of a true believer for an individuals right to determine who is and who isn't a human being when they decide to have an abortion.

Heck, why not possibly destroy a man's marriage for political and personal gain? What's marriage? To the secularist it ultimately has no more value than the child killed in the womb. That's how far many of us are from God's blessings as defined by Him.

I have made it clear that I am a supporter of the candidacy of Herman Cain. If Mr. Cain is guilty of these latest allegations, it is my sincere hope that he confesses it and repents of his transgression. If he does so, I can do no less than what God promises He will do when we seek His forgiveness. I will forgive Herman Cain and continue to support him.

If it is found that he is not guilty, woe be unto those who unrepentantly bear false witness against Mr. Cain. I pray they too confess and seek God's face. But as long as we give over our nation to the passions of man rather than the dictates of a Holy God, we will continue to get the leaders we deserve. And why on earth would God want to save us?

The house of the wicked shall be overthrown: but the tabernacle of the upright shall flourish. There is a way which seemeth right unto a man, but the end thereof are the ways of death. Proverbs 11 and 12, in chapter 14