Hassan Nurullah
Anybody but Obomney

April 23, 2012
Anybody but Obama! That is the right's battle cry moving into the November elections. Do those reading this who consider themselves conservative really believe that simply installing a person in the White House who happens to have an "R" next to his name, and who has contemporaneously taken up spouting conservative bromides, will be enough to right a wayward ship of state? 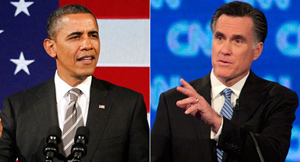 Is the temporal well being of the nation all we are concerned with? Is it even possible to have a temporally healthy America if a nation's leadership and people are spiritually unhealthy? Do values matter anymore?

If values do matter — is it important to know the source those values flow from? If a leader's "values" are similar enough to your own, does it matter where he gets his values? Do you think it matters to God?

Think carefully about this next question: Should the source of values be immutable or can the source be situational? What is the conservative answer to that last question?

I should qualify that last sentence — the spiritually minded Christians have no enthusiasm for our present candidate — the "anybody but Obama crowd" doesn't think it matters who as long as they have the aforementioned "R" and what the Holy Bible calls "a form of godliness."

Our presumptive nominee certainly looks the part, but then so did Saul! And for many, so did Barack Obama! Is it enough to have " a form of godliness?" For a lot of Christian conservatives it seems so. I know many Christians who will vote for any candidate simply because he is the only alternative to Obama.

The right may have been for someone else earlier on, but they will conform — after all, anybody but Obama right?

Is that the right way of thinking?

The term " a form of godliness" comes from the Second Book of Timothy, lets look at it in context, chapter 3:

1 This know also, that in the last days perilous times shall come. 2 For men shall be lovers of their own selves, covetous, boasters, proud, blasphemers, disobedient to parents, unthankful, unholy, 3 Without natural affection, trucebreakers, false accusers, incontinent, fierce, despisers of those that are good, 4 Traitors, heady, highminded, lovers of pleasures more than lovers of God; 5 Having a form of godliness, but denying the power thereof: from such turn away.

Well, many of you will say: "That may sound like Barack Obama, but it doesn't sound like any of our candidates." Doesn't it? Frankly it sounds like all of us.

The difference is some will come to recognize they are in the reprobate state described above and choose to leave it by accepting the God of the Holy Bible's precepts and redemptive work through Christ Jesus — while the people being addressed above have chosen to deny the God of the Holy Bible in favor of other gods or what suits them temporally and spiritually.

The apparent Republican favorite was a pro-choice Mormon when it was politically expedient for him to be pro-choice. Now that he is seeking the conservative vote he is what most conservatives want him to be, a pro-life Mormon. The "Christian" God is always pro-life. Yes, even in cases of rape and incest.

God is immutable — it is that immutability that prompted the founders of this nation to base our country's moral laws on the unchanging tenets of the Holy Bible. This is also the reason they acknowledged our rights flow not from the situational ethics of an ever shifting human morality, but from the Creator God, the Author and Sustainer of all.

"Men love to gratify their own lusts, more than to please God and do their duty. When every man is eager for what he can get, and anxious to keep what he has, this makes men dangerous to one another. When men do not fear God, they will not regard man." — Matthew Henry

Those are wise words from Matthew Henry's commentary on II Timothy 3:5. I have said to many over the years that after accepting the saving grace of Christ and becoming a born again believer, I could not figure out how I could vote for any of the Democrats on the national stage and still stay true to the God of the Holy Bible.

You cannot be a pro-choice Christian if you believe what the God of the Holy Bible says in His Word. You can't advocate for gay rights either. So how do you vote for a party or a person who makes advancing issues like those a top priority?

When a politician says he can disregard his Christian faith when considering political decisions he does not fear God — he fears public opinion.

"God is to be loved above all; but a carnal mind, full of enmity against him, prefers any thing before him, especially carnal pleasure. A form of godliness is very different from the power; from such as are found to be hypocrites, real Christians must withdraw." — Matthew Henry

A Christian is not just someone who appears so outwardly, showing a form of godliness, looking to be a good family man or choosing to abstain from smoking, or drinking — but one who is one inwardly. A Christian man does not change his convictions to suit his desire for power, wealth, and comfort. He does not seek to conform his faith to the world, but rather allows his faith to inform his decisions and politics.

When we on the Christian right disregard our faith and what it teaches about false religion and the lessons the Holy Bible teaches about people who pick leaders by appearance and expediency, how are we any different from those who fell for "Hope and Change"?

Just as the establishment left counts on minorities to mindlessly vote for the Democrat candidate without thinking about how ineffective and in some cases down right destructive liberal policies have been to them and the nation on the whole — The establishment right takes it for granted that the Christian right is synonymous with Republican.

If that is indeed the state of affairs with the Christian right, you are placing the temporal above the spiritual and you will be denying the God who says:

If my people, which are called by my name, shall humble themselves, and pray, and seek my face, and turn from their wicked ways; then will I hear from heaven, and will forgive their sin, and will heal their land. II Chronicles 7:14

It takes a great deal more than simply being able to identify the candidate who has an "R" next to his name, someone who woos you now that you seemingly haven't any choice. We need more than that to prompt God's healing. There is always a choice — you can choose the lesser of two evils because he is not Barack Obama — or you can simply reject evil all together.

This is why it is not possible for a person to be born a Christian. Christianity is a choice that one makes, a choice that brings about a change in the chooser. I was pro-choice before accepting Christ, but it did not take long after studying Christ's words to realize I couldn't stay pro-choice, so I changed my position on the issue to conform to Christ! I rejected the world's expediency.

Let me end with this example of what you get when you lose sight of the immutable. The Mormon god and his elders upheld the notion that no Black man could serve as a Temple Priest or take part in Temple ceremonies until 1978 when it became to hot politically for the LDS to maintain this prejudice. They then received from their god "revelation" that he had changed his mind and Blacks could serve.

Bruce McConkle, then a member of the Latter Day Saint's Quorum of the Twelve Apostles, was present when they received the 1978 revelation on priesthood. He wrote of the occasion:

"It was during this prayer that the revelation came. The Spirit of the Lord rested upon us all; we felt something akin to what happened on the day of Pentecost and at the Kirtland Temple. From the midst of eternity, the voice of God, conveyed by the power of the Spirit, spoke to his prophet. The message was that the time had now come to offer the fullness of the everlasting gospel, including celestial marriage, and the priesthood, and the blessings of the temple, to all men, without reference to race or color, solely on the basis of personal worthiness. And we all heard the same voice, received the same message, and became personal witnesses that the word received was the mind and will and voice of the Lord."

The Mormons got this revelation some two thousand years after the Holy Bible declared:

When the Apostle Paul gave instructions for choosing church leadership in I Timothy chapter 3 race is conspicuously absent from the list of criteria. Yet the Mormon's did not get from their god that as they put it, "The message was that the time had now come to offer the fullness of the everlasting gospel, including celestial marriage, and the priesthood, and the blessings of the temple, to all men," until 1978.

It is one thing when a person changes his mind — it is quite another when a person's god changes his mind. If a man's god is mercurial, can there be any wonder why the man following the mercurial god is also less than stable position ally on moral issues? If he is unstable on spiritual matters can he truly be trusted on temporal issues? The first Chief Justice of the Supreme Court didn't think so.

"Providence has given to our people the choice of their rulers, and it is the duty, as well as the privilege and interest of our Christian nation to select and prefer Christians for their rulers." — John Jay

Anybody but Obama right? Go with that! As long as you think spirituality doesn't matter and just any god will do so long as he looks good and says the right things.

I'm not putting my "Hope" for "Change" in anybody but the God revealed in the Holy Bible, even when that means voting "None of the above" for President and voting only for the House, Senate and the other choices come Election Day.