March 7, 2013
A Major reason for my becoming a Christian was that I was shown the Old Testament prophecies concerning Christ, beginning with the first telling of the gospel in Genesis 3:15: And I will put enmity between thee and the woman, and between thy seed and her seed; it shall bruise thy head, and thou shalt bruise his heel. 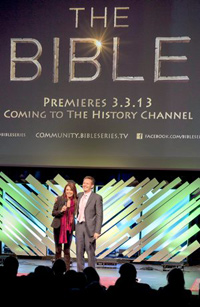 This passage is known as the Protoevangelium. Proto meaning first and evangelium refers to the gospel message, the good news of salvation through Christ – In other words the "first gospel."

Here God is telling Satan, from the beginning, exactly what his demise will be. God tells Satan he is destroyed by the seed of a woman, this is Christ born of a virgin. The serpent is told he is dealt a deathblow by the seed while Satan will only be able to temporarily hurt the seed. Though the seed is struck down, He would again rise.

As a Muslim, I was taught to believe that Jesus was a prophet – But when confronted with the reality of the vast number of Old Testament prophecies concerning Christ that were 100% fulfilled in the person of Jesus in the New Testament, I had to ask myself a very important question.

If the Holy Bible (in the Old Testament) was prophetically 100% correct in foretelling the first coming of Christ and as no historian, (that is not on the fringe at least) secular or otherwise disputes the historicity of the person of Jesus, wouldn't it be logical to assume the Holy Bible likewise correct regarding His return?

This compelled me to seek after Christ for no other reason beyond self-preservation. When I found Him and understood how much God loved me through Christ Jesus, I loved Him! This is what is meant by: "So then faith cometh by hearing, and hearing by the word of God." Romans 10:17

Which is why I am so sorely disappointed in the History Channel's mini series titled "The Bible." In removing all of the foreshadows and types of Christ from the Old testament narrative, as this mini series did in what I saw of it, it does exactly what a Facebook friend, Bolo Fifth Column Cheung said:

"God can use anything, yes. But so can the enemy. The enemy is a roaring lion seeking for someone to devour. Or rather, how about the parable of the sower – the enemy is the bird – quickly devouring the seed. The problem with such programming is that it is WITHOUT the Word. It is not evangelical. It is academic. It fills the head with knowledge but not with the conviction for salvation."

Conviction starts in the heart, it is the heart that must change. Without the head making the proper connections, you never get to the heart. This is why Scripture says:"But without faith it is impossible to please him: for he that cometh to God must believe that he is, and that he is a rewarder of them that diligently seek him." Hebrews 11:6

A person, cannot believe that God is, you aren't rewarded with faith, until you make the proper connections. Those connections are made through the Living Word of God – This is not just an allusion to Scripture, but to Christ Himself, it is through Christ that our faith has meaning and is fulfilled.

Indeed, it was the Old Testament saint's faith in the promises of those prophecies concerning Christ that is their salvation – even though Christ had not yet come, they looked ahead towards His coming. We today have the luxury of being able to look back at the actual fulfillment of the promise.

This morning the Today program on NBC did a brief feature on the mini series focusing on the success of the show, attributing the success not to the public hunger for God – but rather Mark Burnett's prowess as a producer. Comparing the mini series to Burnett's other shows like Survivor and the Apprentice.

NBC also praised the special effects and music, remarking what better way to celebrate the birth of Christ than by having Cee Lo Green mark the occasion with a song. I feel strongly that if the first show had actually given context to what it was depicting in a sincere and honest way, particularly the actual sin of Sodom – the reportage would not have been so kindly towards the broadcast.

What we got from Burnett and his wife and co-producer Roma Downey, is a sterile offering of the Pentateuch. Some of the many reasons this show fell flat for Christians who actually love the Word of God:

No context for Adam and Eve or Cain and Abel, No protoevangelium, No context for Noah's story, no Melchizedek. No context for Sodom, No struggle of Hagar and Ishmael in the wilderness and therefore none of the subsequent mercy from God towards them. No revelation on the person of Ishmael explaining his descendants and their present day barbarism and warlike nature.

Isaac was too young, in fact he was at least as large as Abraham at the time of his testing, Isaac carried all of the firewood for the sacrifice, a small boy couldn't do that. The Holy Bible does not depict him entreating his father to spare his life, in fact Isaac's faith was as strong as his fathers, he was a willing sacrifice. This is what made it a foreshadowing of God the Father offering His Son Jesus Christ another willing sacrifice for all of mankind's sake. Without the proper context you never make the connection that God as Abraham bore witness, would provide His own Sacrifice.

No story of Jacob wrestling with God, another Old Testament allusion to Christ providing more contextual grist for evangelism. No Story of Joseph... The theological errors are enumerable. In fact what you have is a separation of the Bible's theology from the narrative. Not exactly what you would expect when you read Roma Downey's reason for making this program: "Three-and-a-half years ago, I felt the call to do this, I got my husband to share the vision. He is a great man for making things happen. He doesn't hear the word no."

Frankly, if I had realized ahead of time that Joel Osteen, T.D. Jakes and Rick Warren acted as consultants on this project I would have known to expect what I got from the show – These are not men known for their Scriptural fealty.

Roma and Burnett's choices for consultants do serve smartly as a separator, distinctly demonstrating the difference between this show and sincere efforts like Mel Gibson's "Passion of the Christ," which did by the way open with Genesis 3:15 laying the foundation for the "Passion."

I was not surprised when I learned one of the men of God Mel Gibson used as a consultant for his film was Lee Strobel, the author of the wonderful book, "The Case For Christ", because I thought of Strobel's book while watching the film in the theatre.

I find it interesting how God uses flawed men like Mel Gibson and King David before him, to deliver works of such profound worth – Whilst the outwardly good like Downey provide such utter tripe. It is indeed a puzzlement.

I enjoy a good sword fight as much as the next guy, but it would have been much more powerful to show what actually happened in Sodom that allowed Lot and his family to escape unscathed, instead of the angels fighting their way out. I can catch a good sword fight watching the History Channel's new Viking program.

The Holy Bible is filled to the rim with wonderful adventure stories as this mini series clearly illustrates. But without the spiritual context, making the whole thing the love story of God towards man in a desire to reconcile us to Him, it is just that, another adventure story.

"Having a form of godliness, but denying the power thereof: from such turn away." II Timothy 3:5 What you have in the History Channels "Bible" mini series is perfectly described by that passage. It is the "Hollywood Translation" In fact, simply calling the show "The Bible" is apt, as the "Holy" has been removed from it, replaced with a holly. The sin of omission is often more harmful, indeed in some cases more deadly, than a plain dealing lie.