Hassan Nurullah
U.S. socialism and the politics of arms

March 8, 2013
If I may, I would like to play the socio-political theoretician. The modern American leftist dismisses the idea his beliefs are socialist and is able to get away with it, (much to the chagrin of sober-minded realists) because U.S. style socialism is a new species. Not unlike some heretofore undiscovered tree frog found enjoying flies in the Amazon. New coloring, different markings, yet still a frog. 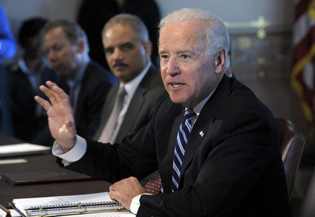 Traditionally when one thinks of socialists, images of bearded men and hairy women – sweating in some dark Café, plotting to do away with the bourgeoisie. Or perhaps a figure, hunched over a camp fire in a jungle, (sweating) dressed in olive drab beside his comrades, inspiring the prolatariat to rise up and over throw their capitalist oppressors by force in a violent revolution.

And that is the way it has happened in most of the places that have fallen to socialism. It begins with an intellectual degenerate, inspiring revolution amongst the lower classes in society, who are then armed – it attacks from the bottom up.

In a society as powerful and throughout most of our history, incredibly prosperous, socialism cannot rely on the old ways. The old ways work well in undeveloped nations, but in the West, a softer revolution was in order.

"You Americans are so gullible. No, you won't accept Communism outright; but we'll keep feeding you small doses of Socialism until you will finally wake up and find that you already have Communism. We won't have to fight you; we'll so weaken your economy, until you fall like overripe fruit into our hands." ~ Nikita Khrushchev

Nikita was right in that we are all but completely there, he was wrong in that America is not awake. So well has the lefts agenda worked in America that wakefulness is a state beyond reach for far too many people.

In America socialism doesn't rise from the bottom, it is a pincer with power infecting the tops of our society, manipulating the bottom of our society. The target of that pincer is unchanged – the middle class, the true bourgeoisie.

The middle class in all western societies controls the means of prosperity, the capital. Whether it manifests as, goods, services...Or the most important capital of all, productive working people.

The middle class is not just the strata controlling capital, it is also the largest and the portion of the nation most vested in things maintaining stability. It is threfore the most frightening element in a society being undermined by socialists.

For the socialist olicharchy on top, it is about power and maintaining power – For the lower strata it's about envying what they have not achieved by there own energy, it is resentment, a destructive force easily used by the top. Grant entitlements and you will be loved, believed and rewarded with power.

The leftist top is therefore vested in maintaining a sense of victimhood and entitlement in the lower classes. so the leftist elites work tirelessly to subvert the machinations of the middle class.

The elites have to keep the guns in the hands of those it controls. They cannot control the middle class, so the guns must be eliminated or at least reduced in the largest and least controllable strata. The strata standing in the way of complete control.

The leftists now control Law Enforcement and the military at the top, but in a more circumspect manner they also control the weapons on the bottom of society.

You see, crime is a part of that lower pincer exerting pressure on the middle. Criminals cannot be effected by gun laws, because they don't obey them. The criminal, like law enforcement and the military, will always have access to fire arms.

The poor who are not criminals, and a great deal of the gullible in every strata are taught through liberal agitprop to hate guns. This is accepted by many of the poor even while they are often the victims of the crime they are most likely, due to circumstances to encounter personally.

The number of those guns on the bottom rises comensurate with the economic pressure exerted from the liberal's failed economic policies at the top. Crime rises when those of already questionable character, react to fewer opportunities to rise and choose destructive behavior.

Oppress the free market with out of control taxation and the threat of more of the same. Compound it with absurd regulations as a reaction to false science and woefully bad business models, weaken job growth and opportunity and voila, you increase your pool of victims/voters.

Tragically, the middle, the key to prosperity, is trapped between a government it fears is becoming too powerful and criminality growing ever larger and bolder. All while facing an assualt on their ability to defend themselves with any level of equality from either point of the pincer.

Why are elements of the government working to undermine the group of American citizens least responsible for the misuse of fire arms? Because that is what socialists do.

When I read the Vice President is quietly pressuring the state of Colorodo to enact some of the strictest gun laws in the nation in order to have a state in the West, a state other than liberal bastions like, California, New York and Illinois comply with the President's gun agenda, I am as always reminded of Scripture:

And have no fellowship with the unfruitful works of darkness, but rather reprove them. For it is a shame even to speak of those things which are done of them in secret. But all things that are reproved are made manifest by the light: for whatsoever doth make manifest is light.Wherefore he saith, Awake thou that sleepest, and arise from the dead, and Christ shall give thee light. See then that ye walk circumspectly, not as fools, but as wise, Redeeming the time, because the days are evil. Ephesians 5:11-16