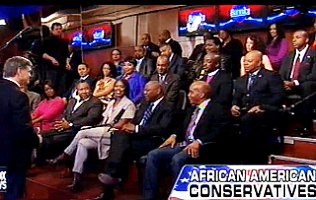 Recently, America was treated to another "Very Special" edition of Hannity featuring a studio audience populated with Black Conservatives. Is it still truly special when Beck and Hannity and company have done it so often now?

Suffice to say, I am a fan of many of the men and women in Hannity's audience, people like Star Parker and Kevin Jackson, folks I admire and respect enormously. And black conservatives are targeted by the left. However, I have to wonder how long it will take for us to get back to a point when such luminaries are guests invited on political programs for reasons other than bemoaning the fact the left doesn't like them.

I can't help but wonder; is victim the default setting for all black people in America left or right? Conservatives grieve over the liberal political and media machines constant exploitation of minority "victimhood"! Isn't Sean Hannity doing the same thing? Is it OK to point out black victims ad nauseam if they are conservative?

If you are trying to reach liberal blacks you should probably not save your "special" show for the same time and night the NCAA Basketball Championship Game is due to air. Is that racist for me to say? I didn't see Hannity's segment myself until the next morning because I was watching the officials like most red-blooded American men without regard to race, creed or color hose my Wolverines. Sean's "special" show sort of reminds me of the shortest month of the year being set apart to celebrate Black History.

The amazing thing is that Hannity has managed to attach himself to black conservative victimhood by doing a segment focused on the backlash he suffered as a result of his statements in support of black conservatism. I am not interested in fleeing the victimhood status I was yoked to on the left, only to exchange it for the equally burdensome rightwing version. I am not interested in being anyone's racially motivated, ethnological cause célèbre.

What shall be done with the Negro if emancipated? Deal justly with him. He is a human being, capable of judging between good and evil, right and wrong, liberty and slavery, and is as much a subject of law as any other man; therefore, deal justly with him. He is, like other men, sensible of the motives of reward and punishment. – Frederick Douglass January 1862 Douglass' Monthly

Just so Mr. Douglas – deal justly. If you are truly trying to win the culture war, the way to do it is not to invite a bunch of conservatives of any stripe onto a show to tell anecdote after anecdote recounting the times people conditioned to call you "Uncle Tom" called you "Uncle Tom." The way to do it is to cultivate a political environment where it is not at all "special" to see black folks espousing conservative ideas.

Go back in time via the wonder of YouTube and you can see men like Thomas Sowell and Walter Williams sharing the stage with Milton Friedman on the Donahue show or some other talk show in the 70s and 80s. Not because they were "black," but because they were two of the greatest economic minds in the country.

Most of the subjects had nothing whatever to do with race, until the issue of race was inevitably raised by a leftist intellectual once he or she could no longer counter an argument without raising the specter of ethnic politics. Donahue was regularly made to look like a complete imbecile, but he seldom let a discussion dissolve into name calling and shouting matches like we see regularly in contemporary political shows left and right. That's because today, both sides, liberal and conservative are really about entertainment, not solutions or even decent intellectual give and take, that gave way with the advent of Jerry Springer and his ilk.

I'd like to see Fox mix in men like Walter Williams, Thomas Sowell or a Ron Miller regularly during Fox News Sunday panel discussions. The only black people consistently appearing on any Sunday news programs are liberals. It would be nice if my kids could see conservative black thinkers asked to share their thoughts on issues other than race relations.

If you want to inspire black folks, sit Paul Krugman Opposite Thomas Sowell so the world can see a conservative economist utterly decimate the arguments of a liberal economist without regard to the specter of race. That will get people thinking! Then you will hear young thinkers black and white whispering to each other; "I never thought of it like that before. Who was it Dr. Thomas mentioned? Hayek? I'm gonna have to look him up after I read Dr. Thomas' book."

How much more powerful would it have been to have a panel of black conservative on Hannity not to complain about being called derisive names, but rather to discuss the impact school vouchers would have in urban America? Or how the gun laws being forwarded by the left have the potential to increase violent crime in urban America. Apply those ideas in context for people to consider and guess what? They will.

At the beginning of Hannity's interview with Dr. Ben Carson, the good doctor made a statement that wants emphasis: "The good thing is once the media gets finished parsing every word and dissecting, maybe they'll start actually listening to what I'm saying."

Hannity's program raised the profile of black conservative intellectuals and I am for that. But it did precious little else. The proof is in the comment sections of the places the show is being watched or discussed on the web. The left still isn't listening to Dr. Carson because all he said was I am being attacked by liberal meanies. Conservatives agree and meanwhile, liberals, black and white, are not persuaded by conservative black bellyaching anymore than liberal black bellyaching persuades conservatives.

Time to move on: Hannity's program is no less exploitive than one extolling the oppressive tactics of the right employed by leftists like Toure' or Rachel Maddow. I am never for using victimhood as a platform for advancing political discourse. Don't cry me a river to wallow and eventually drown in, draw me a plan on how to build a boat. That I'll listen to.

"For our exhortation does not come from error or impurity or by way of deceit; but just as we have been approved by God to be entrusted with the gospel, so we speak, not as pleasing men but God, who examines our hearts" 1 Thessalonians 2:3, 4