May 19, 2013
Someone really ought to inform President Obama that the Moses Webbster's Dictionary he received in his youth was a gag gift – That it is in fact Noah Webster's dictionary, Webster with one "B" that is in fact the compendium of trustworthy definitions of common English words. 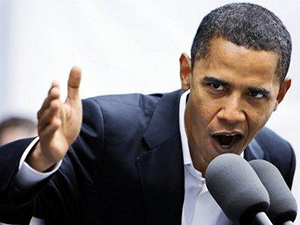 Perhaps it wasn't a gag gift. Maybe one fall when the President's mom was on her way to K-Mart to buy young Barack's school supplies, she stumbled into a dimensional rift leading to the Bizarro world, hence the dictionary where up means down, a world where things are "As quiet as a bell" and "As heavy as a feather."

How else do you charitably explain Mr. Obama's opaque approach to transparency? It seems "As clear as a mouse" to me the thinking portion of the American population have a much different working definition.

It is amazing when you consider the American media has had no problem giving President Obama the benefit of the doubt these past five years. For example, when he said he would openly debate his healthcare plan on CSPAN for the nation to see, a promise it appears he never actually meant to keep they made excuses.

Though he lied about his intent to openly debate Obamacare before public eyes – you understand why he didn't hold such public discussions when you remember how Herman Cain destroyed Bill Clinton on public television when Mr. Clinton was trying to advance Hillarycare, his own socialized healthcare plan.

How the nation expected a man who has done all he can and spared no expense in keeping even his school records sealed could be relied upon to be forthcoming is God's own mystery. It is racist to even question such actions...isn't it?

Even more profoundly perplexing is when the President does tell us his true plans, like his intention to raise energy costs for all Americans, his sycophants don't believe him – or because the media, as Greg Gutfeld so amusingly put it, acts as President Obama's scandal condom, they never hear of it and the people less able to absorb such a policy vote him into office...Eagerly!

The only thing green about the energy policies and schemes the President and his party advances – is the taxpayer's money he has flushed down the toilet backing companies like Solyndra. Yet the blinkard American liberal democrat seems more willing to "Change" the definition of transparent to meet the President's definition than to admit what they are seeing with their own eyes.

America, you have precisely the leadership you deserve!

Even with revelation after revelation coming to light, confirming the Obama administration and his State Department lied to the American public regarding the nature of the 9/11/2012 attack on our diplomats in Benghazi, the liberal media is still all too eager to dismiss those proofs as trumped up right wing politicking.

President Obama told us who and what he was long before he won his first term. Shamefully, enough of the nation was so blinded by racial identity, liberal wrongheadedness and indifference to truth and reality, they voted for a man obviously ill equipped and morally questionable and he now inhabits the highest office in the land.

The media now disingenuously feigns high dudgeon when they realize the character they have shielded low these last six or so years has used the resources they helped procure for him to spy on the fifth estate they themselves are a part of. Even with this fact coming to light the press has not gone full bore to hold this President accountable.

The democrat and liberal lickspittles still pretend to believe the President when he tells them he heard about his administrations improprieties at the same time the public did through the media. He had no idea elements in his trust would abuse the IRS or the Justice Department to attack his political rivals.

Meanwhile, the very person most responsible for using the resources of the IRS to target and weaken right wing organizations for leftist political gain is now the President's choice to run the most sensitive and powerful segment of the IRS. This same person will now head up the section responsible for examining your healthcare records and enforcing the public's compliance with Obamacare.

How do you continue to extoll the virtues of a man's leadership abilities when he makes decisions like that, or at other times confesses an utter lack of awareness of the goings on in his own organization? The constant refrain from the left during the George W. Bush years was President Bush was too dumb to run his own office, that it was Dick Chaney, Donald Rumsfeld and the like who were really in charge. This tiresome bromide was raised to the level of holy writ for the leftists.

This begs the question: Who is in charge of the Obama White House? It clearly isn't President Obama! Like Sgt. Hans Georg Schultz Mr. Obama is never culpable due to a blissful state of perpetual ignorance. Yet somehow, the same media that was the ever-present skeptic of President Bush's leadership never accuses David Axelrod, Valerie Jarrett and the like of being President Obama's puppet masters.

As a Holy Bible believing Christian I have no doubt who is running things in the Obama White House. God tells us precisely who and what inspires the sort of twisted morality and philosophies the left and president Obama "cling to":

"Finally, my brethren, be strong in the Lord, and in the power of his might.

Put on the whole armour of God, that ye may be able to stand against the wiles of the devil. For we wrestle not against flesh and blood, but against principalities, against powers, against the rulers of the darkness of this world, against spiritual wickedness in high places." Ephesians 6:10-12

It is those spiritual principalities and powers that inspire the President and his appointees indifference to the truth. It is the same ones who closes the eyes of the President's followers in the media and electorate. If you want the whole truth, it was again the same spiritual principalities and powers that lead the right wing leadership to promote the nomination of President Obama's opponent in the 2012 elections.

For the people who voted for Barack Obama and nominated Mitt Romney, I will close with a couple of old saws untouched by the President's Bizarro world – You were "Asleep at the wheel" and we now find ourselves "Between a rock and a hard place."