In my view there is an easy, universal barometer we can use to evaluate all cultures: how do they treat their most vulnerable members...those whom Jesus so aptly referred to as 'the least of these'? I would go so far as to say that a society that does not...defend the defenseless, [protect] all human life, is really not a civilized society after all. As for all my pro-choice friends out there, we can agree to disagree...and keep on arguing (until I win). — Bobby Jindal, from Leadership and Crisis

[After reading] all 700 verses of [Hindu Scripture's] Bhagavad Gita, I dug out...the unread Bible my friend Kent had given me, and [due to my parents' objections] sat in the closet and read from Genesis to the end. [Still] I had no epiphany...[until later] watching a simple black and white film about the crucifixion. I suddenly realized that Christ was on the cross because of me — my sins — what I had done, what I failed to do. He didn't die for billions, which was so abstract, but because of me. Suddenly God was tangible [and] everything instantly came into focus. — Bobby Jindal, from Leadership and Crisis 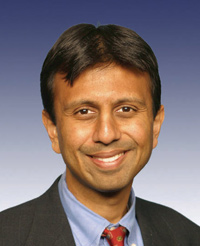 After leaving his only serious Republican challenger, Senator Rick Santorum, half-dead in the dust under an avalanche of the best half-true attack ads money can buy, GOP nominee Governor Mitt Romney has spent his summer saying little and trying to make less of a fool out of himself than President Obama, with mixed results. For just when Barack, the man who wants to make home Bible studies a crime and becoming a millionaire a felony (unless you give half your money back to the government while bowing to His Royal Highness for helping you succeed) has seemingly done something to alienate all but the basest of his base, here comes the Romney regime trotting out Condi Rice as his "mild choice" for VP. And although the true conservatives have probably roared loudly enough that Romney has realistically put the Rice test to rest, we must continue to now insist that Mitt the Mormon doesn't settle for the shiny Rubio or the safe Pawlenty or Portman, but the guy who has already shown "leadership" in "crisis," Louisiana governor, Bobby Jindal.

For those faithful FIT blog readers who have previously read (a year and a half ago) that Jindal was my choice for president, this pick will come as no surprise, but it's now important to first go back to the others on Mitt's veep list before returning to Bobby. No doubt Romney's camp had Drudge float the name of former Secretary of State Rice to see if it would loosen Obama's grip on the "woman vote," not to mention his stranglehold on black voters. But the usually articulate Rice's vague "mildly pro-choice" stance (does that mean Condi only favors abortions done with pain-numbing drugs amidst soft music, or approves baby killing just when a birth defect means the child won't turn out as pretty and "mild" as she?) so infuriated social conservatives that Romney quickly pulled the plug on Condoleezza, but not before his own pro-life convictions were (again) called into question. If anything Romney's "Rice try" proved Mitt is still more Machiavelli than Mother Teresa in his convictions, more opinion poll than heart and soul in his decisions.

On the other hand, Marco Rubio looks to be the perfect pick for Romney — until you research beneath the surface. A photogenic rising star in the GOP and current role model for many Latinos, Rubio's warts first became evident when he embellished the tale of his family's immigration from Cuba. But even if you believe Rubio when he said that his compelling campaign speech (and website highlight) that his parents were forced to flee Cuba when Castro came into power (when in fact they left Cuba freely nearly three years before Castro took over), was an innocent mistake, the unanswered questions of Rubio's religion should make you wonder. Once again, his website's statement that Rubio is a faithful Catholic should calm the conservative Christian's fears — especially coupled with the fact that his family returned to the Church after three years of dabbling in Romney's own quasi-Christian Mormonism. But later, when you discover that Rubio and family have not only been attending, but giving large sums of money to, the Christ Fellowship Church for years (which interestingly enough says on its website that it is a non-denomination church when in fact it is Southern Baptist, a church not exactly in doctrinal agreement with Catholics) it has to make even the most fervent of Rubio fans ponder. Finally, after fellow Renew America columnist Eric Giunta earnestly e-mailed Rubio's office about the religion question only to receive the frosty response, "Mr. Rubio is still...Catholic...perhaps you can [now] focus on the many serious issues facing our nation," it pretty much put the icing on the cake that while Romney probably deserves Rubio, he certainly wouldn't benefit from him.

And then there's (Tim) Pawlenty and (Rob) Portman, the safe choices...so safe they almost make Romney look exciting by comparison. With Governor Pawlenty, you have the pretender who bears the dubious distinction of being this election's first major presidential contender to give up, now practically begging for another chance to put the electorate to sleep. He is the only candidate who actually wants (and needs) the vice-presidency to remain relevant; which in itself should be reason enough not to choose him. As for Senator Portman, he could almost be described as "mini-Mitt," a man whose ascent in politics was largely due to his dad's money. Like Romney, "Prince Rob's" past on the wrong side of conservative issues such as the North American Free Trade Agreement are now air-brushed away as youthful indiscretions, nothing to be concerned about. Furthermore, the story that Jane, his wife (who at the time worked for prominent Democrat Tom Daschle) "agreed to become a Republican if Portman agreed to become a Methodist," sounds like a match made in heaven — especially if you accept the Mormon version of the hereafter as a place of divine political expediency.

Contrast this with the life and times of Bobby Jindal. As you will note from his book (and my past blog) not only is the story of his parents' immigration from India unadulterated and his conversion to Catholicism (not to mention his strong pro-life stance) sincere, but his conservative accomplishments are real. A graduate of Brown and Rhodes Scholar at Oxford (where he was already forced to defend the conservative world view) Jindal presided over the Louisiana healthcare system (turning a 400 million dollar deficit into a 220 million dollar surplus) at 24, headed the University of Louisiana education system at 27, became a U.S. congressman at 33, and was elected the governor of Louisiana at 36. Not only does his healthcare background make Jindal uniquely qualified to battle the abuses of Obamacare, but his bouts as governor (a position he has held longer than Romney) to fix Katrina and fight the Gulf oil spill showed he can beat Barack and the bureaucracy of Washington as well as anyone. As Merle Black, professor of political science at Emory University states, "he has the potential to excite conservatives more than any other candidate," a declaration that both excites and worries Romney's people, if only because Bobby has the potential to overshadow Mitt if he so desired. But their fears are unwarranted.

For unlike the equally conservative Santorum, Jindal is far from a political loose cannon. He knows his place now is to keep Obama away from power, gently nudging Christian conservatives (like myself) off the fence to vote for an untrustworthy Republican they wouldn't normally support so that he can quietly work for Jesus behind the scenes. Then, in 2016 or 2020, an older but wiser President Jindal should be able to fully restore our country to Christ, and make us one nation under God again.