Today Catholics (a faith that, as far as I know, you still claim allegiance to) "celebrate" the Feasts of the Holy Innocents. As you may recall, when the Wise Men foretold of a newborn King, the evil King Herod, fearing a future rival, planned to seek and destroy Him. But an angel revealed Herod's plan to the Wise Men, and they never came back to disclose the Christ Child's location. Picking up the rest of the story from scripture:


When Herod realized that he had been deceived by the magi, he became furious. He ordered the massacre of all the boys in Bethlehem and its vicinity two years old and under, in accordance with the time he had ascertained from the magi. Then was fulfilled what had been said through Jeremiah the prophet:

A voice was heard in Ramah,
sobbing and loud lamentation;
Rachel weeping for her children,
and she would not be consoled,
since they were no more. — Matt 2:16-18

Sad as this tale is, if the story stopped there, there would be little reason to write you today. But being a wise man yourself, I'm sure you've heard that many current Catholics and other pro-lifers compare this story to the murder of the unborn, saying that abortion is the modern day equivalent of the slaughter of the innocents. Like all Americans, you wept and prayed over the children massacred in Newtown, but about abortion (a slaughter that daily makes Newtown's gruesome numbers look miniscule) you appear quite ambivalent. 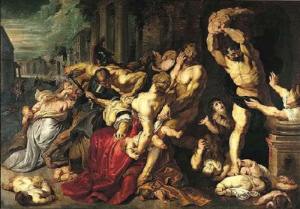 Yes, I have heard you echo the hollow cry of the democratic "Catholic" contingent, the liberal lie that, while I am personally opposed to abortion, I could never impose my religion on these "Roe-ful" women. And yet, you are unafraid to impose your "religion" on innocent children...

Ah, but I am not Herod, you argue, for I do not order anyone's murder — I mean choice. I simply let women decide for themselves. I suppose in some sense you are right, for unlike King Herod, deep down you know the killing of innocents is wrong, although you do nothing to stop it. Instead, you are more like Pontius Pilate. Afraid of losing the votes of Planned Parenthood, a mob much more organized than the one that shouted for Christ to be crucified, you simply wash your hands of the matter. But at this point, I must confess a fear myself.

My fear is, that when you meet your Maker, the spotless Lamb who shed his Blood to save us from our sins, you will find that the blood of abortion is not as easy to wash off as you thought.