Tom O'Toole
Inspiring Lies: My (continuous) fight to save the Irish and Notre Dame

November 1, 2013
It was Sunday morning, and while I was worshiping the Lord at the Latin Mass (one of the more inspiring moments of the week for the committed Catholic), my prayers, both serious and frivolous, were heading off to God through the saints at a resounding rate. While none of my prayers for healing or conversions were answered, at least not in the immediate sense, my frivolous (to most, but not to myself, my son or apparently, God) prayer was, when my request for two not-too-expensive tickets to next Saturday's Notre Dame/Navy skirmish were offered to me by my brother, Michael (who would be quite tickled to find out I was actually praying for them), nary two hours later.

So as son John and I are heading to South Bend this weekend, at least on the surface to witness a football game, I'll start my long awaited (by my fans, if not Father John Jenkins) renewal to writing for FIT first with an examination of the Fighting Irish, followed by my more dire assessment of the state of the University of Notre Dame itself.

As both an alumni and the author of one of the first books to thoroughly explore the Catholic connection between faith and sports – or "Cathleticism" to the "Champions of Faith" fans – it was always my contention that the Fighting Irish football team, if led by a man of genuine faith, could not only lead the team to another national championship, but help inspire the University to return from Modernism to Catholicism as well. And last year my plan, if not prayers, seemed to be working, as an inspiring defensive player named Te'o helped lead the Irish to an undefeated regular season, and a place in the title game. But sadly, there were a couple of holes in this scheme...

First, Manti Te'o was Mormon, not Catholic, and whether you agree with Catholic writer (and ND grad) Bud McFarlane's portrayal of the Mormon deity as a "cartoon god" or not, when Te'o's tragic lost love turned out to be a cardboard girlfriend, the once heroic Hawaiian game unraveled against Alabama, and the once revered Manti left Notre Dame more curiosity than legend.

Fueled not only by Te'o's strange departure but star quarterback Everett Golson's dismissal from the team for academic improprieties (aka cheating) the 2013 Irish currently weigh in at a pedestrian 6-2, about as much as one could expect from a team led by earnest-but-undersized (not to mention nonathletic) QB Tommy Rees. Likewise, while a University led by President John "Julian the Apostate" Jenkins is not expected to inspire confidence in the Orthodox Catholic, there are signs the Jenkins' lie is growing wider here as well. 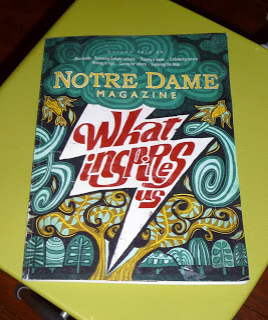 The latest hint of Notre Dame descending even deeper into Dantean depths is ironically an article in the Notre Dame Magazine entitled "What Inspires Us." Basically, it is an article created by emails from alumni responding to the question, "What was your most inspiring moment at Notre Dame?" But as always, it is the choices the editors made that are the most telling of where the University is heading.

Not being fools, the editors did print many tales that are truly inspirational to the faithful alumni, regular and subway, if only to not alienate their allegiance and pocketbooks completely. For example, Meg Egan Auderset's ('88) story of coming to the campus for the first time, ditching a tour and then ending up at the Grotto ("I was astonished to find real college students praying...outside...on their knees...in the rain...Notre Dame hooked me then...") is a classic tale of love of Our Lady's University at first sight. Meanwhile, Angie Appleby Purcell's ('97) recounting of not grasping ND professor Catherine LaCugna's explanation of the Trinity until this very teacher became terminally ill, "'[Through] my suffering I have experienced great love from God. My cancer has redeemed me,' she said...[and] what my head struggled to comprehend, my heart was open to," brings a tear to any Domer's eye. Finally, even Scott Appleby's ('78) recounting of eccentric-but-lovable English Professor Joseph M. Duffy Jr. getting worked into a frenzy over Dickens' Bleak House, "[This] novel is the desperate, noble...endeavor to bring order to chaos. Clutch it to your breast as a lifeline!" is definitely worth the retelling.

But in its modern spirit of rebellion, or trying to always do the Church one better, Notre Dame can't quite leave inspired teaching well enough alone. If ND Magazine had to quote a homosexual alumnus, it could have stayed pat with Steven Saftig's ('03) story of being gay at Notre Dame. "Father Jim [Lies] welcomed me into his room late that Friday night...I sat and stammered until I...[said] 'I'm gay.' I had already decided that his response would determine whether I would stay three more years at Notre Dame...[H]e hugged me, the [best] thing he could have said or done." By showing compassion but at the same time not encouraging homosexual acts, Father Jim acted rightly and well within moral bounds.

But when the magazine then not only decides to include the so-called "inspired" brainstorming story (by Liam Dacey '04) of how he helped start up the Queer Film Festival at Notre Dame, but concludes the sordid recollection with how Father Ted Hesburgh gave this ghastly enterprise his blessing while "thanking us for our hard work," you wonder how (barring confession) Notre Dame's blind and ninety-plus year old ex-president can escape hell.

Without going into gory details, these films (which Notre Dame still sponsors) promote anything but gay chastity, and I remind the good Father that the Catechism calls homosexual acts "acts of grave depravity...intrinsically disordered [and] contrary to the natural law...[as] they do not proceed from a genuine affective and sexual complementarity. Under no circumstances can they be approved" (CCC 2357). It reminds me of my roommate freshman year who, not quite feeling at home, wondered if this was truly the promiscuous party school he was promised – but then feeling at ease once he heard the ND-sponsored band playing a rousing cover version of Jimmy Buffet's "Let's all get drunk and screw." Of course, the Notre Dame Magazine would never print THAT memory, but the only difference in these two grave sins is that the University deems the first depravity politically correct and the second one not.

Speaking of politics, if the one story is condemning of Hesburgh, the next is particularly damning of Jenkins. First, Jenkins directly defied the US Conference of Catholic Bishops' teaching entitled, "Catholics in Political Life," which states abortion is "always intrinsically evil and can never be justified [and] to make such intrinsically evil actions legal is itself wrong," and that "Catholic institutions should not honor those who act in defiance of our fundamental moral principles. They should not be given awards, honors or platforms which would suggest support for their actions," when he honored President Obama at the 2009 Notre Dame Commencement. Then, instead of admitting his gross error when Barack broke his 2009 commencement religious exception promise by forcing Catholic institutions to pay for abortions and contraception through Obamacare, Jenkins doubles down on his error in the following story.

Through his influence over the staff at Notre Dame Magazine, Jenkins perpetuates the lie through the warped memory of Kristen Dold '09. "My tight knit community at Notre Dame experienced a deep divide the week of our graduation...[p]ro-life and pro-choice activists lined the streets of Notre Dame...with megaphones and banners...for once, we weren't on the same team. But the day of President Obama's speech, our other president, Father John Jenkins...melted the divide by [declaring], 'We'll never stop talking to those who differ with us...[w]e're better than that.' And when a heckler interrupted Obama by shouting "Abortion is murder!" [m]y class...shouted louder 'WE ARE ND!' Obama broke from his script...[agreeing] 'We're not going to shy away from things that are uncomfortable...' [as] [o]ur two presidents delivered the greatest lesson I had learned in four years. Open hearts, open minds..."

First, let me say I don't blame Kristen so much for her brainwashed revisionist history as I do her "two presidents." But let me remind Ms. Dodd that only the pro-life protesters were arrested that fateful weekend, hardly an example of Jenkins' "open mind" – not to mention that the magazine didn't print the truly inspiring, alternative commencement story of the pro-life students. Let me also mention that, however unpatriotic someone heckling the president may seem at the time, the Church teaches that this man's message was true, and shouting him down is neither open-minded nor open-hearted, but merely mob mentality at its most basic. Instead of swallowing more of your president's propaganda, I advise you to watch the impressive, blind obedience the German youth gave their Fuhrer in the film "Triumph of the Will," then juxtapose this with the newsreels of the brutal beating German-Jewish protesters received at that time. Perhaps you will then gain a better understanding of Fr. Jenkins, and the different way he treated the pro-life and pro-choice factions back in May of '09.

Just as I can't expect a national championship out of the athletically (and spiritually) challenged 2013 football team, I really can't hope for "the Flagship Catholic University" (as Cardinal George likes to call ND) in South Bend, as long as Jenkins is still at the helm. Still, I am grateful for the small miracles, whether it be free football tickets or the fact that I am not (yet) arrested for my pro-life, pro-Notre Dame blogs as were my fellow pro-life protesters who appeared in person at Our Lady's University that sorrowful May day. But as I pray, I also wonder how much longer my freedom will be assured if indeed those two presidents are allowed to stay.