Wes Vernon
Illegal immigration: the GOP's elephant (in the room)

January 8, 2009
Picking up the pieces from the 2008 election is going to be an uphill climb as it is. Add to that an issue deemed so delicate that not one of the six candidates for Republican National Chairman dares utter a meaningful word about it during a 90-minute debate. That would indicate the issue of the never-ending invasion of our borders will be ignored (on a bipartisan basis) in the near future, just as it was in the recent presidential campaign. 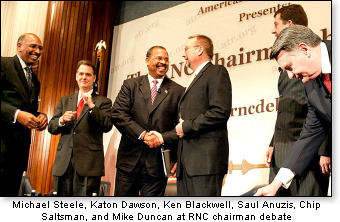 The scene of the debate on Jan. 5 was the National Press Club here in Washington. The six contenders, one of whom will be chosen by the 168-member Republican National Committee at the end of this month, fielded questions from party activists. The dicey question came from Mario Lopez, President of the conservative Hispanic Leadership Fund (HLF).

Mr. Lopez was not being adversarial or trying to lay a trap for the would-be RNC chairman. the question was asked in good faith. His group favors a lot of things conservatives favor: lower taxes, entrepreneurship, and education reform, etc. In terms of an overall view of the world, everyone in the room was pretty much on the same page.

Lopez phrased the question and its preface this way:

"In roughly 30 years, the United States will be a majority minority country, 50,000 Hispanics turn 18 every month, and by 2050, I in 3 Americans will of Hispanic descent. After significant gains with Hispanic voters  for example, President Bush 40 to 44 percent of the Hispanic vote in 2004  harsh rhetoric from some Republicans and the general lack of a real sustained commitment were large factors in dropping the GOP share of the Hispanic vote to 31% in 2008 and 27% in 2006. Given the demographic changes facing the country, do you agree with the notion that the Republican Party cannot be a governing majority ever again without expanding the base by bringing more Hispanics and other minorities into its ranks? If so, how do you plan to integrate these efforts into all aspects of party operations?"

What was not said

Notice that in his question, Mr. Lopez did not mention the "too hot to handle" issue at the bottom line of his political concerns: illegal immigration. But then, not one of the answers delivered by the six RNC chairman-hopefuls mentioned that issue either. In using the term "harsh rhetoric," one suspects Mr. Lopez is using that as code language for (to put it in more straightforward terms) the reaction of the public to the invasion of our borders by an estimated 12-20 million illegal aliens.

There are times when the best intentions of a government "of the people, by the people and for the people" stop short of fulfillment. Illegal immigration is a prime example. A couple of years ago, Congress tried to pass an amnesty bill that would have rewarded illegal aliens for breaking the law. Thanks to talk radio and the internet (including this column), you and millions of other Americans bombarded Capitol Hill.

Ever since then, politicians in both parties have been treading on eggs over the issue. So the six candidates to lead the Grand Old Party naturally figured if Mr. Lopez won't go there, why should they put their heads on the chopping block?

In their responses, the candidates touched on several issues on which Hispanic voters are in sync with the values of millions of other Americans and the conservative ethos: school choice, abortion, sanctity of the individual, limited government, "families empowered by choice in health care," safe streets, a good job for their children, etc.

Duncan cited the new Republican governor of Puerto Rico  elected on a conservative platform in a minority-dominated impoverished territory.

There are some valid ideas included in these answers, but still not a word about the underlying issue  again, illegal immigration.

And the problem: How does the Republican Party stand up for the sovereignty of these United States and do it in such a way that it is not misinterpreted as a personal attack on Hispanics per se. Of course, this won't be easy, because every demagogue crawling out of the woodwork (to say nothing of every street loudmouth with a bullhorn) will see to it that any honest protest against illegally crashing our gates is misinterpreted, no matter what you do or say. When liberals just want you to shut up, they resort to precisely that kind of intimidation. 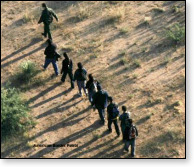 There is nothing, absolutely nothing, in illegal immigration that has a logical appeal to any American  naturalized or native-born  black, brown, Hispanic, or of whatever origin. But liberals see illegal immigration as a political opportunity, the well-being of the country be damned.

From their perspective, when you import illegal aliens, you import poverty. That's good. They like that. To them, importing prosperous or average middle class people would be a bummer. Not much political mileage there. What they need is fertile ground for their grievance-mongering. They want to see to it that once these desperate people get here, they never reach middle class status. The whole liberal slogan might as well be "Keep them poor and angry." The "shining city on the hill" doesn't net liberal voters.

A large minority of labor union members today vote Republican because they've moved into the comfortable (or contented) middle class. This means Democrats have been running out of victims, and they are horrified because victimology is their political calling card.

Many previous legal arrivals to our shores had little more than the clothes on their backs. Within two or three generations (sometimes in the very first generation), they took advantage of the free society so that ultimately, class hatred  as a political argument  rang rather hollow to them.

Enter invasion as a "civil right"

Today, thanks to the failed hand-out welfarism that has prevailed in many Latin American countries, some of their people have crashed our borders to find opportunity here, and in many cases, they have sent their earnings back home, where their native country's all-but-official policy is "Keep them poor and angry," all the easier to make them dependent on the ruling politicians. Democrats intend to mine political paydirt by putting these folks on a path to citizenship without requiring that they first go back home and get in line behind those who follow the rules of our immigration laws.

Marxist-minded politicians want to keep these people poor. If they're poor  so the rationale goes  they will always vote Democrat, the party of class hatred. Once the new arrivals ever see how they're pawns in this game of frightened demagogues, the result could be backlash and possibly Republican votes. Can't have that. So they and their criminal activists at ACORN encourage the non-citizens to vote illegally in our elections, rationalizing that this is a "civil right." Meanwhile, they promise them a "path to citizenship," but don't want them to get too comfortable. Keep them at or below the poverty line. Otherwise, they too might end up voting Republican, and they're supposed to hate Republicans as the "bad guys." 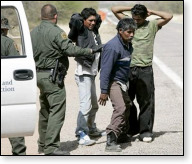 Illegal immigration is not a "civil right." It is an invasion, encouraged by liberal politicians whose plot is to see to it that changing demographics keep them in power. In short, it is their racket. They like it, and they intend to use it to lock in a permanent liberal pro-Marxist majority in government. Marxism sees to it that everyone is equally miserable except those in power and their financial backers. (You don't see the likes of Soros walking the streets with a tin cup.)

To say crashing our borders (uninvited) is a "civil right" confuses the plight of illegal immigrants with that of the black African-Americans whose ancestors were brought here against their will for the purpose of slavery.

Back to the would-be Republican chairmen

Before the liberals' well-laid plans succeed in veering our already quasi-socialist society off the cliff to its ruin, whoever is elected Republican National Chairman late this month will have to be prepared to take on this ultra-sensitive issue in such a way that it does not backfire. Yes, I know  easier said than done. But if any candidate for RNC Chairman is just looking for another star on his resume, RNC members and voters should know that now. This will be hard work. And the Republican Party  if it is to survive  needs a chairman who can succeed in that effort, and knows how to do it with an effective scalpel and without resort to the sledgehammer. No one said this would be easy, but if it is not accomplished, it isn't just the GOP that stands to lose. Ronald Reagan granted "one time only" amnesty to three million illegals, but warned against making that a habit, saying that a nation that cannot protect its borders is not a nation anymore. Well, absent meaningful immigration reform, we will not have a nation anymore. It's that simple.

During the Bush presidency, Phyllis Schlafly  a longtime GOP and conservative activist  took the RNC to task for failing to include the issue of illegal immigration in polling questions sent to grassroots Republicans, possibly because of a belief that the answers would expose the unpopularity of the Bush administration's "open borders" policies  another sad chapter in the stupid party's longstanding death wish. That kind of pussyfooting or evasion of the issue will not do. The next RNC chairman should understand there is too much at stake.

There was actually one very brief mention of the illegal immigration issue at the RNC forum  just not in the context of HLF's question regarding the Hispanic vote. That came when Katon Dawson mentioned illegal immigration and Social Security reform as two of the Bush Administration's disappointing failures.

Ken Blackwell of Ohio has won the endorsement of leading conservatives. He is right not only on their issues, but has the personality, the political smarts, and other leadership qualities required for the RNC chairman's job  particularly at a time when there is nowhere to go but up. The others have good qualities too, but Blackwell  in positions, background, general attitude  seemed to hit the home run with the activists who consider themselves Americans first, conservatives second, and Republicans dead last.

All candidates named Ronald Reagan as the best Republican president. When asked to name the worst GOP president, most skirted that one  not Blackwell. His answer; "Hoover, because he opened the door to big government activism." Amen. Hoover paved the way for FDR who ushered in the welfare state as the norm rather than the exception.

Mr. Blackwell then brought the house down when he added, "I think, unfortunately, President Bush in the last few months has opened the door to Mr. Obama's big government."