April 13, 2009
The Obama administration and the Reid/Pelosi Congress are coming at us with so much threatening asininity  obviously aimed at overwhelming critics. Good strategy, but it won't work. When LBJ had his post-Goldwater super-majority D.C. lockdown, critics were poorly organized. Today, we have talkback in the form of  all together now  "the vast right-wing conspiracy."

Herewith a "hit" parade  albeit compressed  of assaults on life, liberty, and the pursuit of happiness that conservatives should duly note:

President Obama this month is attending the Fifth Summit of the Americas where he is to announce the easing of some trade and travel restrictions  no doubt as an intended prelude to later lifting of a 47-year-old embargo against Cuba.

Thomas Van Hare  co-author (with Matt Lawrence) of Betrayal: Clinton, Castro and the Cuban Five (see last two columns, 3/30 and 4/6) has a good idea of what's coming. In an e-mail, he tells us to expect a "Working Group on Cuba" (no doubt with a predetermined agenda and outcome), and Havana's announcement that Cuba will release "a few dozen key political prisoners."

And here's where that show is worthy of a front row seat: In exchange, says Van Hare, "They want the U.S. to release the Cuban Five"  spies the U.S. imprisoned in connection with Cuba's murder of four pilots on a mercy mission to raft-refugees fleeing Castro's Communist prison. (Again, see Betrayal.)

Ah, but Van Hare reminds us that "to get them released from jail would take a Presidential pardon." Our question: To what extent is Barack Hussein Obama willing to show his true colors?

A U.S. congressional delegation paved the way for Obama's concessions to Cuba. That group (which spent 4½ hours with little brother Raul Castro) was headed by Rep. Barbara Lee (D-Calif.), who also chairs the Congressional Black Caucus.

To give that situation some perspective, recall that  according to counter-intelligence expert J. Michael Waller  Congresswoman Lee "has a long history of support for the Castro regime and its surrogates." (See "My Darling Comrade Leader: Barbara Lee and friends coddling dictators"  Center for Security Policy. Also see Waller's "Congress's Red Army"  National Review  in the eighties).

When working in the office of then-Rep. Ron Dellums in the eighties, Lee tipped off the Cuban-backed government of Grenada of an anti-communist spy in the office of that nation's Marxist-Leninist premier (according to captured documents now in the National Archives). Lee and her congressional staff colleague Carlotta Scott (reportedly linked romantically to Grenada's Leninist official Maurice Bishop) got Dellums interested in trashing then-President Reagan's valid claim that a Cuban-built airstrip in Grenada was designed for heavy Soviet military aircraft.

These are facts you may want to bear in mind when you see Rep. Lee on television berating Americans for being so primitive as to distrust Cuba, and arguing we should get with it and join 15 other nations who have full relationships with the Castro brothers' Communist police state.

Here we go again. Every time a certified liberal gets to the White House (Carter and Clinton), almost as soon as the inaugural parades end, he's out on a whirlwind worldwide tour apologizing for his country. Thus it follows that a certified socialist president (Obama) would outdo his predecessors in re-activating the groveling machine.

So maybe we should make the apology complete.

I'm sorry, Europe, that we pulled your chestnuts out of the fire in two world wars, sacrificing over a half-million American lives in the process  larger losses than most other countries except Nazi Germany and Japan (enemy countries), the Soviet Union (a key enabler of Germany until Hitler left Stalin no choice but to switch sides), the UK (the London blitz), and pre-Communist China (attacked by Japan four years before Pearl Harbor).

Those pro-Nazi collaborators in France were doing OK. That is, until we rudely intervened and broke up their little party with the Normandy invasion and liberated their countrymen. Please excuse us for interfering.

And oh, so sorry we had to pay through the nose for that Marshall Plan to feed the starving in your war-torn countries and help re-build your infrastructure. Such "arrogance"!

And please forgive us for fighting the Cold War that kept much of the world, including Western Europe, out of the Communist slave orbit for all those years. We apologize for humiliating those peace-loving (on their terms) Soviets by allowing Ronald Reagan to take them down without firing a shot. Real buttinskies we are. I guess we just can't help ourselves.

Obviously, we shouldn't have pushed back against Soviet-engineered aggression in Korea and Vietnam. What's the matter with us? Didn't we know that Nehru's India bravely contributed ambulances in Korea? Wonder what would have happened if we had sent nothing but ambulances to that conflict. But then that's Asia  not your backyard, so not your problem, right, Europe? There we go butting in again.

When the terrorists at Gitmo are let loose by President Obama's order, please forgive our selfishness if we end up keeping most of them on our soil, and not sharing more of them with you. After all, you've been telling us how mean we've been to the cutthroats there who want to kill millions. So obviously, you can't wait to embrace them in your midst, right?

And our mea culpa wouldn't be complete without apologizing for having elected a president who wanted to run for president and wanted to be elected president, but  alas  didn't really want to be president. You may derive some satisfaction that he's trashing his country on your soil, thereby feeding your anti-American craving. And that's OK. When a real missile heads in your direction, I'm sure you'll be ready to dial up Code Pink for help. 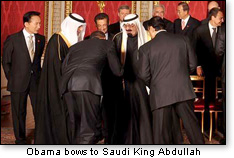 And when our make-believe president bows to Middle Eastern potentates, be kind to him. Bowing to a king is but a symbol of how he grovels to every foreign royalty and tyrant on earth. You see, he views that as one of his presidential perks. Only our friends (i.e., Britain's Gordon Brown) get the brush-off.

Elsewhere on the globe-trotting Obama front

That President Obama would be talking overseas about banning all nuclear weapons and moving toward disarmament just as North Korea was launching a missile denoted a timing that couldn't have been more apt as a commentary if it had been planned. (Maybe it was  by Someone upstairs trying to send a warning to us earthlings.)

The real lesson in that coincidental juncture of events, of course, is that while presidential rhetoric can be uplifting in the abstract, the truth is often brutal. As the Heritage Foundation puts it  "No matter where on earth a missile is launched from, it would take 33 minutes or less to hit the U.S. target it was programmed to destroy. President Obama must invest in a strategic missile defense system that is proven, capable and affordable."

Instead, the president is downplaying this program. The man either is on a different planet or has a suicide wish for all of us.

Tax you for breathing?

This concoction would enable individuals to sue the federal government (i.e., us taxpayers) or private businesses if they believe they have been harmed in any way  or even expect to suffer  from "greenhouse gas emissions (global warming)."

The Washington times reports, "Environmentalists say the measure was narrowly crafted to give citizens [code language for Greenpeace-type crazies] the unusual standing to sue the government as a way of forcing action on curbing emissions."

Liberalspeak Translation: Those pesky elected officials won't buy into our "global warming" fraud, so we'll get those life-appointed politicians in black robes to shove it down the throats of the bourgeoisie and  in the process  line the pockets of our trial lawyer benefactors and campaign moneybags.

Much of the rest of the 648-page Waxman/Markey bill reads like something out of Mad magazine.

It imposes thousands of new federal regulations, some that will affect you in your own home, from lamps to showerheads  all in the interest of curbing carbon. The questions of who will impose the carbon tax and how the money will be used are left for trial lawyers and judges to decide down the road.

It almost seems as if the only issue not dealt with is how the "carbon footprint" from human breathing will be reconciled. Maybe we shouldn't write this. It might give them some ideas.

At last, a federal judge has blown the whistle on abusive and reckless prosecutors.

U.S. District Judge Emmett Sullivan has thrown out a corruption conviction against former Senator Ted Stevens (R-Alaska) and turned the tables on the prosecutors. Now they  all six of them  are the ones who are in the dock.

But that won't get Stevens his job back. In a classic case of drive-by justice, Stevens lost his bid for re-election  without a doubt because of the now tainted conviction by jurors who knew nothing about allegations that prosecutors had repeatedly hidden exculpatory evidence. The election was held just a few days after the wrongfully delivered verdict. The then-senator lost by an extremely slim margin.

Note well these names: Brenda Morris, William Welch, Joseph Bottini, James Goeke, Nicholas Marsh, and Edward Sullivan (no relation to the judge). They are the six prosecutors who are now in hot water with the judge. His Honor has ordered an investigation to determine if they are guilty of a crime. If they are ultimately found guilty, they deserve long terms in the slammer as an example of loose cannon prosecutors who are out  not for justice  but for blood.

Said Judge Sullivan: "In my 25 years on the bench, I have never seen anything to approach the mishandling and misconduct I have seen in this case."

Alaska Governor Sarah Palin had it right when she said the man who defeated Stevens  Democrat Mark Begitch  should resign and allow a new special election. That won't happen, though it should. His victory over Stevens qualifies as an ill-gotten gain.

This column took a verbal shot at Holder a few weeks ago in another matter and we stand by those comments. In the Stevens case, however, he demonstrated admirable integrity.

In other words, he was just doing his job. That is more than we can say for his predecessor. Then-AG Mukasey ignored defense letters pointing out provable prosecutorial misconduct in the effort to convict Stevens. It is reasonable to surmise the following:

Mukasey was under orders from the White House not to interfere lest then President George W. Bush's administration be accused of "favoritism." If that's the story (and this column will almost bet the ranch it is), it is another example of innocent or good people caught in a witch-hunt net because a Republican president doesn't want to take flak from Democrats.

This also appears to be the case with Scooter Libby (the Valerie Plame case), and border guards Ramos and Compean. They should have been given full pardons. Merely commuting their sentences unjustly leaves their professional employment prospects in question.

And Mr. Bush should have let Mukasey pursue prosecutorial misconduct charges against the attorneys pursuing Stevens. Prospects of the Alaskan's getting his old job back are nil.

Avoiding "favoritism" is one thing. Allowing your friends to take an unfair career-breaking rap just to keep the Dem jackals off your back is something else.