Wes Vernon
Here we go again: liberals are in trouble, time to haul out the "right-wing" bogeyman
Obama's "95%" of taxpayers; dismissed talkshow host speaks out

April 20, 2009
This column thought it would be necessary for conservatives to make much more headway than they have so far this year before the Obama administration would mount a government smear operation against "right-wing extremists" (i.e., disagreeing with His Nibs).

Apparently we were wrong. All it took was the Tax-Day tea parties and a few (bipartisan) warnings about the crushing debt expected as a result of wild deficit spending.

The warning on "right-wing extremism" 2009-style comes from the Homeland Security Department. That agency is headed by Secretary Janet Napolitano  who sees Islamic Jihad on our soil not as extremism, but as "man-made disasters," a term far less specific than those the memo applies to conservatives.

The attack was contained in a memo DHS sent out to law enforcement officials around the country.

These things go in cycles, but those with long memories can recall the old cycles when the new ones come along. Only the names change. By contrast, the rhetoric is of the "Play it Again, Sam" variety.

Back in 1961, Cuba had just become a Communist island prison 90 miles from our shores (as it is today); the Soviets were going strong in their drive toward world domination; and at Grassroots America, the film Operation Abolition exposing the Communist drive to abolish congressional investigations of domestic Communism was being shown at assemblies, PTAs, City Halls, American Legion meetings, Rotary luncheons, and other "hometown" locales from coast to coast.

Liberals of the era were alarmed  as if to say what's the matter with these people? Why aren't they content with the spoon-fed pabulum dished out by the establishment media?

Back to the closet to haul out the "right-wing" bogeyman. Before long, television specials, newspaper headlines, and news magazine spreads were warning us about "Thunder on the Right," etc.

We've been here before. It's not new.

Some of the issues are different. This time, you are a government-decreed "extremist" if you oppose abortion on demand; question Al Gore's preachings on "global warming;" believe the Second Amendment means what it says; protest big government; or favor enforcement of immigration laws. In fact, if you favor anything the Obama administration doesn't like  you are a "right-wing extremist."

Even veterans don't escape the smear, with hints they just might be potential Tim McVeighs. The memo seeks to lump legitimate conservative activism with violent hate groups and racists. It's the old smear. There's nothing here we have not seen before.

The memo is Rightwing Extremism: Current Economic and Political Climate Fueling Resurgence in Radicalization and Recruitment. It stipulates that the information "is not to be released to the public, the media, or other personnel who do not have a valid need-to-know."

That is like waving a red flag and saying "Warning! Don't think of pink elephants." The document went to law officers in every state, city, and town in the USA.

In fact, this has all the appearances of a deliberate back-door effort to unleash the hounds of the left on the doings of patriotic Americans. One can reasonably surmise that Obama's people released this nine-page memo in hopes that the mainstream media will pick it up, "fill in the blanks," and launch an all-out "thunder on the right" crusade on the national, state, and local levels as happened in the sixties. Reacting to the recent uproar, Secretary Napolitano apologized for the memo's "wording," but not its thrust.

That drumbeat of the sixties continued round the clock through the 1964 campaign when Barry Goldwater  the most conservative presidential candidate since Calvin Coolidge  was pasted with guilt-by-association slander. In truth, he was their real target all along.

Who is their real target this cycle? Sarah Palin, maybe? They're afraid of her, just as they were afraid of Goldwater. But this time, there will be conservative media voices to talk back (maybe  first the fight to save talk radio; there is no limit to this administration's crusade against the First Amendment rights of its critics  see below). 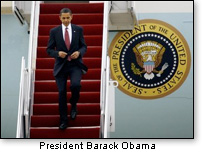 Once again, we are about to get yet another lesson in the old verity that when a politician says "I'm only going to tax those evil rich guys," Joe and Jane Six-Pac are well-advised to hold on to their wallets/purses.

President Obama promised his tax hikes would not affect the "95% of Americans" who make less than $250,000. By many measurements, that is a disingenuous fraud. But now even before he's lowered the official tax-grabbing boom, here it is plain as day for all to see.

The backdoor tax on your money

The Obama Environmental Protection Agency (EPA) has issued what it calls an "endangerment finding" on the health and welfare implications of carbon dioxide.

That piece of paper, according to Senator James Inhofe (R-Okla.), "will unleash a torrent of regulations that will destroy jobs, harm consumers," and "extend the agency's reach [that will] find its way into schools, hospitals, assisted living facilities, and just about any activity that meets minimum thresholds in the Clean Air Act."

Not only on the Republican side of the aisle were protests heard. Rep. John Dingell (D-Mich.)  the dean of the House of Representatives  predicted the EPA's "finding" will produce a "glorious mess."

Add to that the assessment of no fewer than eight think tanks that the EPA de facto edict "will set the stage for an economic train wreck and a constitutional crisis."

Senator Inhofe noted that the "glorious mess" apparently is offered as an alternative to prod Congress into passing a "cap and trade" law (see this column May 12, 2008, and June 9, 2008). That's just replacing "one very bad approach with another," the senator opines. Better to pass a bill that stops EPA in its tracks, he advises.

The outlook for applying any brakes to this irresponsible power grab is not good. Obama's socialist Energy and Climate Change "Czar," Carol Browner, has the EPA on a short leash. On Capitol Hill, Congressman Dingell has been dumped as Chairman of Energy and Commerce. His replacement, sad to say, is Congressman Henry Waxman (D-Calif.), who has co-authored yet another bill to regulate you to death and line the pockets of the trial lawyers (see last week's column).

Oh, yes  and by the way  the onerous regulations will soak up dollars from all of us, including "the 95% of Americans who will get not get a tax increase." But the president doesn't call it a tax. Whew! What a relief!

Speaking of making you "feel better" about taxes on last week's Tax Day, you'd better sit down for this one:

Millions of citizens (and yes, non-citizens) are applying for tax refunds they don't deserve, according to the folks at Social Contract Press (SCP).

You may have heard of the Earned Income Tax Credit (EITC)? That is a check that goes to the millions who pay no taxes. Instead of paying money to the government, they get money from the government. It's called a "tax credit" in Orwellian liberalspeak. In reality, it's a welfare check.

Now to add insult to injury, there is a sweet little racket going on whereby people are getting even more EITC money than the law allows.

It's all laid out in the SCP report The Earned Income Tax Credit and Illegal Immigration: A Study in Fraud, Abuse and Activism.

Financial analyst and economist Edwin Rubenstein, author of the report, told a news conference at the National Press Club April 14 that in 2007, the General Accountability Office (GAO) reported that between 27% and 32% of EITC claims were improperly paid. That's approximately $12 to $14 billion dollars of fraudulent EITC payments in that year alone.

He says EITC scams "are common, well-organized, and massive."

If any town needs an effective conservative local radio talkshow host, it's Washington, D.C. But this city just lost one of the best in the business.

Perhaps breathing too deeply of the gambling capitol's rarified air, Las Vegas-based Citadel Broadcasting rolled the dice and lost when it yanked Chris Plante off the airwaves of its wholly-owned WMAL in the nation's capitol.

Not because he couldn't cut it. Plante had a large audience, good ratings. His show succeeded in the most politically-charged and one of the most liberal cities in the nation, and with a flair that was accompanied by intellectual heft.

But Citadel, in its infinite wisdom, cut him loose. The reason? The company had invested lots of money in the Joe Scarborough Show, where that former GOP congressman banters with Mika Brzezinski  a lefty who supposedly offsets Scarborough's inch-deep "conservatism."

Big mistake. Citadel would have done better to syndicate Chris Plante nationwide, but its executive suite declined to do that. Had the company made the national use of the D.C. talent it had  instead of bumping him for Scarborough  Plante would quickly have become second only to Rush Limbaugh. But no.

He was also a badly-needed public soldier in the fight against the enemies of free speech who want to shut down conservative talk radio.

In an interview with this column, Plante said he "almost welcome(s) any effort by [the left] to impose government regulation on free political speech [by trying to shut down conservative talk radio] because quite honestly, I think it exposes them for what they really are. The more they reveal themselves, the more their ideology will lose ground in the United States of America, and that's a fight that I look forward to and that I was looking forward to on the air, certainly. And if they want this dustup  you know, you can't [ordinarily] get conservatives to march. Do this and see what happens....People are lining up with pitchforks on this one....And the pushback  if it doesn't come from the Republican leadership  if it doesn't come from inside the Democratic party  it will come from the people of the United States who I think will step up on this one and say enough is enough."