Wes Vernon
Yes, the red menace is still a threat, Part 3 - or where is Joe McCarthy when we need him? (McCarthy, Part 11)

December 7, 2009
Our topic this week concerns enemy tactics against the United States and the urgent necessity to fight back. The occasion is the re-release of Blacklisted by History. Therein, author M. Stanton Evans  whose focus is Senator Joseph McCarthy  gives us a fascinating tutorial on the Soviet effort to undermine our country before, during, and after the "McCarthy era," and some lessons that can be learned as today we face an alliance of the hard left and the Islamofascist threat. 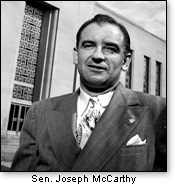 At a private discussion late last year, the topic of internal security arose with a focus on the "political correctness" that induces public figures  including many who are elected  to brush off the danger of radical Islamist terrorism.

The comment was made that what America needs right now is someone to kick over the settings of Washington's garden party of political denial  perhaps a 21st century Joe McCarthy.

"We'll probably have one during this next administration," said one participant in the chat. (This conversation took place when it appeared likely that we would have an Obama White House.)

The significance of that last comment is that it came from someone who had some firsthand knowledge of the McCarthy investigations during the Wisconsin senator's time. At the time of our conversation, many in the media were sitting on the information that candidate Obama had been influenced by such communists as Bill Ayers, Bernadine Dorn, and Frank Marshall Davis.

What we did not know then, of course, was that a self-avowed communist  Van Jones  would become President Obama's "green czar"  and that he would be exposed and forced out of his job  no thanks to most of the mainstream media, which ignored the story. Nor did we know then that the future president would appoint to high office people who  for example  would sing the praises of such communist tyrants as China's bloodthirsty tyrant Mao Zedong (Anita Dunn) and Venezuelan dictator Hugo Chavez (Mark Lloyd).

Enemies then and now 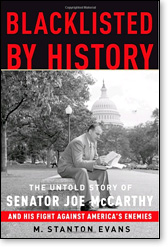 M. Stanton Evans' 2007 bombshell Blacklisted by History: the Untold Story of Senator Joe McCarthy and his fight Against America's Enemies is now in book stores in paperback  which means you can buy the 604-page volume with a lighter purse or wallet.

Senator McCarthy took up the cause that he did when it was evident that high officials and much of the media were either ignoring or covering up widespread communist infiltration of the U.S. government. The most well-publicized case prior to McCarthy's appearance on the anti-communist scene was that of Alger Hiss, who had held several responsible positions in government, including the Agriculture Department, the State Department, and as an adviser to Franklin Roosevelt when he was negotiating with Soviet butcher Joseph Stalin as to what the world map would look like after World War II. Thanks in part to Hiss's influence, Stalin got the best of that deal.

We are paying the price for such U.S./Stalin disasters to this day. For example, North Korea  one of the five remaining official communist nations  has been building a nuclear arsenal that may yet pose a serious threat  assuming that Iran, an Islamofascist state, doesn't get there first.

That does not begin to describe other lasting bitter fruits of communist subversion in McCarthy's time  such as Red China's growing power today. Chinese subversives have stolen us blind  including secrets from our Los Alamos nuclear laboratory in New Mexico  the same locale where the Rosenbergs a half century earlier had done some of their dirty work for the Soviet Union. China would not be communist today were it not for friends of China's Reds in our own government who were pursued by the senator in his era.

In reading Blacklisted by History, there is an unavoidable eerie feeling that fifties history is repeating itself today. Alibis, cover-ups, denials, and deceit that were the enemy's weapons then are no less evident now  more than 50 years later. 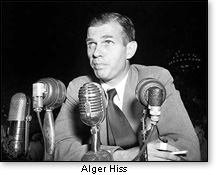 Back then, the alibis for Alger Hiss, Owen Lattimore, Harry Dexter White, and others covered the full range of contortions and logic stretched to the breaking point, just as today we are hearing silly alibis for bald-faced evidence of scientific lying and cheating to ram through a Marxist-style climate/energy proposal that would put us and our economy in a communist-like straightjacket. (See this column last week "Climategate: Let the investigations begin.") As we have noted before, some of yesterday's Reds are some of today's Greens. When the Soviet Union collapsed, its acolytes in the U.S. and elsewhere did not just go away.

And while we're on the subject of Climategate: Senator James Inhofe wants an investigation into the lying, cheating, and deceit exposed in the e-mails of scientists cooking the books in order to advance the hoax of "man-made global warming." Senator Barbara Boxer, on the other hand, wants to turn that on its head and go after the whistle-blower for his/her "theft" of the e-mails. Never mind that the policy issues in the content of the e-mails dwarfs the methodology used to make them public. If a crime was committed in how they were obtained, it can still be prosecuted. But that does not  or should not  overshadow the fraud revealed in the e-mails themselves.

Hmmm  now somehow this has a familiar ring  Oh! I know. How often in the fifties we heard lectures saying, yes we know he's going after communists, but he must be destroyed for his "methods."

In this era, an Islamic radical  Major Nidal Malik Hasan  in the name of "Allah" guns down 13 of his fellow military people in cold blood at Ft. Hood, and right away, the first thing the chattering class worries about is "Oooooh! Too bad his name isn't Smith. Certainly we don't want to comfort the purveyors of 'Islamophobia.'" And if that doesn't complete the whitewash, there is always the Council on American Islamic Relations (CAIR)  a de facto front for radical Islam  which peddles the notion that terrorists are "just criminals." 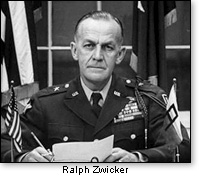 In the "McCarthy era," Brigadier-General Ralph Zwicker clearly lied under oath in connection with the issue of retaining a communist Irving Peress in the Army and then compounding the outrage by promoting him. Ultimately, Zwicker himself was rewarded with his own promotion. True to the history of denial usually written by the winners (deserving or not), Zwicker comes off as a martyr, whereas McCarthy is  as Evans writes  "blacklisted by history."

Then, as now, the enemy and its echo chamber in "respectable" circles turn everything on its head and get away with it.

Barack Hussein Obama  having been influenced by communists and having appointed pro-communists to high positions in his administration  gives strong weight to the wishes of his radical left base before making any meaningful decision.

How else to explain his administration's decision to pull Khalid Sheikh Mohammed  the mastermind of 9/11  out of an ongoing military trial process and shift him and four others to face a civil court trial in New York City, with all the rights and privileges accorded ordinary horse thieves.

Just as CAIR is willing to identify radical Islamic terrorists as mere "criminals," so too is the communist-created National Lawyers Guild. The NLG's executive director Heidi Bogoshian has said that with the upcoming trial of Khalid Sheikh Mohammed and others, "we remain concerned that defense lawyers will shrink from the obligations of vigorous, effective representation."

Translation: Bring on the show-trial. Bend the law to turn terrorists loose in downtown Manhattan. Put the Bush administration on trial, while providing a platform for the terrorists who pleaded guilty in the military system, but now are pleading not guilty. That circus essentially is what the partners in the alliance of the far left and radical Islam are advocating. They would love nothing better than to use the 9/11 plotters trial to brand such patriots as Dick Cheney as "war criminals." Put America on trial. And for what? To satisfy the mindset shared by America's enemies  terrorist and communist  namely a deep-seated hatred for the United States.

Thus the push to excuse or ignore America's enemies as enemies continues today and replicates the blind eye to genuine threats that prevailed in high places and that frustrated Senator McCarthy in his day. Traitors were excused then. Terrorists are excused now.

Whether in yesterday's or today's communism, today's terrorism, or today's alliance of communism and terrorism, the parade of tortured logic, alibis, and deceit is endless.

Take, for example, Joan Hall, whose husband Theodore was caught up in the atomic spy rings in the U.S. Her husband "wasn't a spy," Ms. Hall insists. "[H]e was a scientist with a conscience who shared knowledge with the Soviets that he felt needed to be shared with them."

The siren song of Marxism

It was the Franco-Bulgarian philosopher Tzvetan Todorov who pinpointed the appeal of communism down through the years  notwithstanding its blood-soaked record of killing 100 million innocents:

"The attraction of a totalitarian system," he wrote, "has its roots in a fear of freedom and responsibility. This explains the popularity of authoritarian regimes.... None of this is new. Boethius had the right idea long ago when he spoke of 'voluntary servitude.'"

The Obama administration apparently is intent on using those fears to grab for more power over our lives by imposing its radical agenda. Townhall meetings, Tea Parties and other such manifestations of independent spirit indicate Americans are not buying any notion of "servitude," voluntary or otherwise. That scares the daylights out of the Marxists in the administration who thought they had the skids greased, so to speak. Thus, they're redoubling their efforts to force their warped thinking down our throats.

It would have been better if the Wisconsin lawmaker had been "less impulsive, more nuanced and more subtle in his judgments," the author writes. "On the other hand," he adds, "somebody more nuanced and refined wouldn't have dreamed of grappling with the forces deployed against him."

So will a rough-edged rhetorical weapon be required to add focus on a popular peaceful, but emphatic, uprising? Is that what it takes to counter the actions of those in high places in and out of government who are selling out (intentionally or not) to America's enemies, regardless of our aversion to the "voluntary servitude" of Marxism?

America could have used effective grassroots anti-communist Tea Parties in McCarthy's time to support his efforts. Today, we do have the populist Tea Parties and we have some good, effective public servants who are speaking out. But will our cause require a public figure in the spotlight willing to go a bit outside the boundaries of good decorum (if necessary) and raise the kind of unrelenting protest that McCarthy did in order to focus the nation on the enemy/coalition's assault on this nation's security, its freedoms, its very foundations?

Blacklisted by History is a good read for anyone interested in the tactics of America's enemies. More than a half century ago, they destroyed a senator who took no prisoners. With more organized grassroots support this time around, will anyone step forward to assume that role?