March 22, 2010
Lawmakers in the House of Representatives thumbed their noses at their constituents as they voted to provide a glidepath to federal takeover of a very personal part of your life  the relationship between you and your doctor.

The momentum already was with the Democrats when the White House as able to strike a deal with Congressman Bart Stupak, a leader of a band of anti-abortion Democrats. That agreement accelerated the momentum to a wind just strong enough to put socialized medicine over the finish line.

President Obama satisfied Stupak when he promised to sign an executive order saying there will be no funding for abortions under the new legislation.

Former GOP House Majority Leader Dick Armey said he was "stunned" that Stupak would fall for a "stunt like that. An executive order does not trump the law of the land." And the Senate bill which the House was poised to pass Sunday night is widely interpreted as allowing taxpayer funded abortions. Moreover, an executive order can be reversed by the current president  not to mention by some successor who is not bound by any such promise to Stupak and Co. 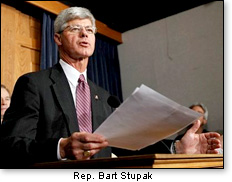 This doesn't end the drama  though it certainly marks the most significant turning point. Waiting in the wings are the so-called "fixes" that congressional leaders were hoping would satisfy wavering Democrats in the House who had problems  of one kind or another  with the Senate-passed bill.

Beyond that, there are lawsuits lining up to take the fight to the courts. They will drag on for years unless the opposition can persuade judges to put the measure on a fast track or order that the bill's implementation be put on hold while the legal process quickly runs its course. Neither is seen as likely. So the process of government control of one-sixth of the nation's economy started Sunday night. The train has left the station.

Still it will take some time  years  to get the system fully in place. It is questionable whether the Republicans can repeal the measure even if they win big-time in the November midterm elections.

Perhaps we should encourage  only halfway facetiously  a program to facilitate trips to Canada or Mexico by the liberals who have agitated for governmentcare for lo these many years. There are reasons why many Canadians have chosen to use our medical facilities, just as there are reasons why many of the aliens who illegally crash our borders with Mexico do so for the specific purpose of getting "free" service in our emergency rooms  causing many of them to shut down in California and elsewhere.

Left-wing ideologues in this country have repeatedly said (if not in this exact language), "Well, we're the only industrialized country that does not guarantee "free" health care for all. Therefore we must follow in lockstep with the socialist societies of the world and show how mature and 'with it' we are."

Why not buy a train, plane, or bus ticket and hand it to anyone who claims our health care system is inferior to Canada's and Mexico's?

While millions of liberals are falling all over each other to make this mass exodus (Not!), the rest of us can contemplate what top-down government control of health care can mean, and what we will be throwing away by tossing out the best health care system in the world (for all its shortcomings). Take China, for example:

This is the story of an American woman living in Chungking, China, who was told by a Chinese doctor there was "something wrong" with her unborn baby and that she would need to undergo an abortion.

No way was she going to allow that. So the American woman went to Hong Kong (now part of Red China) and was told by another specialist that there was indeed something wrong with the baby and the child would probably die.

The American woman went back to the doctor in Chungking every week, and he would tell her to "get rid of this inconvenience."

Her husband was able to arrange for the expectant mother to return to the U.S., where her family lined her up with nine specialists, and she was told that there had been an improvement and that the baby would live. The specialists were available at birth to perform necessary surgery.

Today, that baby is a beautiful four-year-old girl whose family loves her as "adorable." She does have problems. She has something called Turner syndrome, which is "very easily and well treated in this country," according to a medical professional in an interview with this column. In China, the medical professionals can't do that.

Thus an example of the great superiority of a "progressive" health care system over America's "antiquated" health care machinery. It is more than reasonable to raise the question of whether any such personal attention will be accorded similar scenarios once the system voted through on Sunday is embedded in this country. Good-bye to the America that respects the "human" factor in health care, as opposed to the systems that see less than perfect babies and senior citizens as "inconveniences."

The idea of "free" health care is already causing egregious waste and abuse. As a health care professional who has been a nurse for 42 years says, the current Medicaid program  aimed at helping the poor  is rife with abuses leading to situations where only one child is sick, for instance, but the families will "trot in all their children and expect them all to be seen."

This health care provider adds, "Our hospitals probably waste" millions of dollars each year. "People are showing up and using the emergency room like a clinic," she told this column. "I think a totally public system is going to cause more abuse. I don't see that as the kind of 'reform' we need to make. We need to work on reforming the fraud and abuse rather than putting more layers of bureaucracy on top of it which would lead to more fraud and abuse."

That sentiment was echoed by a small businessman we interviewed.

Said he: "If somebody had said a long time ago 'Are you for health care reform?' I would have said yes, and I think a lot of people would have said yes on the basis that when you go to the doctor's  and you have insurance like we have  all of a sudden you start getting all these bills. And they're from five different people  for five different amounts. They don't make any sense. But implementing reform of situations such as that  I don't think that's what they're doing. I think we're going to see more of that anyway."

This particular businessman's shop provides health insurance to employees there. But his shop has so few employees that he hopes to escape the worst impact through exemptions. However, there is a tiny minority of his staff not covered  part-timers, secondary jobs, etc. If any of those people must answer questions from the hundreds of new IRS agents unleashed to enforce the new law (that everyone must purchase health insurance), such an investigation could lead back to this particular tiny business and adversely affect it.

The people more likely to be hurt are the "larger" small businesses  the well over 20,000 successful enterprises in retail, manufacturing, and service industries  virtually all of which provide health insurance and retirement plans.

Those interests are represented by the Small Business Council of America (SBCA) which had pleaded with Congress not to pass the Senate bill, whose details, they argued, "will not only harm small businesses and their ability to provide health care for their employees, but . . . lead to the ultimate demise of this country's private health care system."

SBCA CEO Peter Shanley predicted that "If health care is not funded properly by Medicare [as is widely feared under the bill], then the end result will be greater rationing of our health care system and fewer more costly options for Medicare recipients," resulting in a deterioration in "the quality and availability in health care."

Of course, the monstrous 2700-page Senate bill approved Sunday night in the House does not do one thing to rein in the trial lawyers. As the veteran nurse referenced above said to me, "If doctors were not so afraid that they have to have every patient have every test [for fear of incurring malpractice suits], it would take a great burden off the health care system."

Right. And where is Ralph Nader, the man who  in the name of "protecting consumers"  led this nation to its current sue-happy environment? As usual, not examining the abuse inflicted on consumers by some out-of-control elements of the tort bar, and certainly not calling for tort reform as an avenue to true health reform.

Rep. Peter Hoekstra, a veteran Republican lawmaker from Michigan, can foresee a time when  if the GOP were to gain a stronger hand in the next Congress  a Republican Congress and Democrat president can work together to undo some of the damage inflicted by this new bill before it gets too far along  with the result of sensible health reform. We can only hope. Obama's left ideology would get in the way.

Republicans hoping for a comeback in 2010 could do worse than to promote a video of a comment by Rep. Alcee Hastings (D-Fla.)  the third-ranking Democrat on the House Rules Committee that reported the health "care" bill to the House floor. This gem "says it all":

"When the deal goes down, all this talk about rules  we make them up as we go along."

Given that Mr. Hastings is an impeached judge  only the sixth in the nation's history  removed from the bench on charges of corruption and perjury, we bow to the congressman on the issue of making up the rules "as we go along." Just a glimpse of the kind of sleaze that pushed this horrible bill through Capitol Hill.