April 15, 2010
The radical anti-American left is going back to doing what it enjoys best: infiltrating and disrupting gatherings of patriotic Americans, as well as trying to discredit or undermine normal citizens so as to make them look like kooks. In addition to those who bankroll the Obama supporters of the oppressive left, there is reason to believe that criminals and subversives are at work to bring down the Tea Party's anti-tax rallies. Whether these groups overlap is at this point a matter of conjecture. They are certainly singing from the same hymn-book on the anti-Tea Party effort.

In this age of Obama, the radical left apparently has no qualms about announcing its plans to the world. Jason Levin  creator the website Crashtheparty.org  says he has 65 "leaders" in major cities around the country. According to AP, those "leaders" are trying to recruit members to infiltrate this week's anti-tax Tea Party protests from coast to coast. Likely suspects for such mischief would be agents of ACORN (by whatever name it assumes after "disbanding") and SEIU.

This is the way Levin explains his ambitions: "Every time we have someone on camera saying that Barack Obama isn't an American citizen, we want someone sitting next to him saying, "That's right, he's an alien in outer space."

You can bet Obama's lapdog media will be right there to film the kook comments by left-wing provocateurs. We will be told that such crazed comments represent the thinking of Tea Party members  rather than the rag-tag anti-American head-cases who actually utter them. This won't be easy, you know. Some of the fraudulent infiltrators will have to clean themselves up. And in the evening, they can go home, complain it was a "tough day at the smear-bucket factory," and comfort themselves by watching their hate-filled video-taped rants on TV, and adding, "But it was worth it, man."

It will be a break from the head-crashing tough times the anti-Americans are suffering these days: the popular blowback against Obamacare, the wild spending, as well as exposés of the Marxist czars and cabinet members; President Obama's terrible poll numbers; liberal congressmen afraid to face their constituents at townhall meetings  all of this annoys the left, whose foot soldiers are frustrated. It must be tough to manufacture Tea Party racist comments that were never spoken. But what's a poor Marxist to do? As a Tea Party organizer, Bob MacGuffie, tells AP: "They [the infiltrators] can't actually debate our message and that's their problem."

The Obama administration and many of its leading supporters have been adherents of leftist organizer Saul Alinsky, who counseled in his Rules for Radicals, "The main job of an organizer is to bait an opponent into reacting. The enemy properly goaded and guided in his reaction will be your major strength."

That's why House Speaker Nancy Pelosi and House Democrat Leader Steny Hoyer and other congressional leaders were marching as a group over to the Capitol the day of Obamacare's passage. In making a big show of escorting several of their black colleagues, they were hoping to goad Tea Party protestors into doing something that would bring discredit on the anti-Obamacare movement.

It didn't work. So they made it up. A congressional staffer spread the outright lie that someone from the Tea Party spat on and hollered the "n" word at a black lawmaker. In typical cowardly fashion, that "source" demanded and got anonymity. Of course, several media outlets  doing their best imitation of trained seals jumping for fish tossed at them by their zoo-keeper, rushed to the cameras and reported on the falsehood without first checking it out. Cameras that were actually rolling on the event did not detect any such happening. But good leftist propagandists know that it is often difficult for truth to catch up to a lie.

Two days after the Jason-Levin-open-invitation-for-infiltrators, Cliff Kincaid, Editor of Accuracy in Media's AIM Report, drew a connection between Alex Jones, an American and "truther" propagandist for the line that 9/11 was an inside job, and Webster Tarpley  a "truther" who was mentored by the infamous conspiracy theorist and convicted con man Lyndon LaRouche, and who is "considered to be the intellectual author of the 9/11 truth movement." 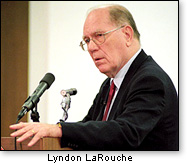 Some disciples of LaRouche have been known to show up at Tea Parties to disrupt the events organized and overwhelmingly attended by mainstream freedom-loving Americans. Kincaid describes a Tea Party-organized pro-gun event attended by Jones. An eyewitness to the rally (video-taped in Austin, Texas), said, "Alex Jones shows up with a bullhorn with what can only be described as a gang of thugs, and proceeds to disrupt the entire rally shouting over speakers, shutting down the program, and ultimately driving off most of its participants with his obnoxious antics."

As mentioned before, there is no telling whether there's an identifiable connection between Levin's openly invited infiltrators and the LaRouchees. Certainly the end results of their efforts  if successful  would be the same  to discredit the genuinely grassroots Tea Party movement. Media folks  cameras and mikes in hand  would love to pick up crazy sound bites about 9/11 being plotted by the U.S. government, and then linking all that to the Tea Party.

On Wednesday of this week  the day before Tax Day  there was a massive rally at the city of the original Tea Party  Boston. The 2010 version was a great success  no disruptions, a turnout of thousands. Sarah Palin was the star attraction and was received with thunderous applause. One of the speakers there Colin Hanna, President of Let Freedom Ring (LFR), told this column that  based on his experience  he is inclined to believe that the infiltration/disruption story may have been overplayed.

House Speaker Nancy Pelosi and others "love to put down the Tea Party as Astroturf  [or] fake grassroots," Hanna observes, "when in reality, it's real. What they're trying to do with the infiltration effort is [itself] Astroturf. They're trying to orchestrate an infiltration effort that isn't working largely because it's not genuine. It's not organic." Nonetheless, he advises, be on the alert for infiltrators, so that when you see them make sure "that the media covering the rally understand they're not a part of or representative of the Tea Party movement."

Hanna's focus in his speech at the rally was the sheer arrogance "out of the Pelosi and Reid-dominant Congress." The LFR CEO added that "people [at the Tea Parties] are reacting against arrogance  not just against the issues of taxation and government overreach...but also against the psychology of egregiously arrogant leadership [that] thinks that it's okay to pass bills without reading them  and to cut deals and lie to taxpayers about who's going to pay the tax burden."

If you are able to attend a Tea Party rally in your area, this column wholeheartedly urges you to turn out and do so. You can get information on the Tax Day rallies and other Tea party events by going to such websites as letfreedomringusa (Hanna's group), or freedomworks.com (headed by former House Majority Leader Dick Armey), or TeaPartyPatriots.org. The latter, according to Hanna, is coordinating Tea Parties all over the country on Tax Day and beyond. Tea Party Express planned to conclude its bus tour at mid-day Thursday before the evening rally that Freedom Works has planned near the Washington Monument.

Self-appointed infiltrator-in-chief Jason Levin says "we have sat quietly and in their [Tea Party] meetings and observed their rallies." His idea is to plant leftist agents at the rallies so as to paint them as racists, homophobes, and morons. He openly acknowledges that is his purpose. One wonders where people like Levin get the money for their destructive political wrecking-crew operations. Mainstream journalists doing their job would follow the money and see if it leads to George Soros and his far-flung anti-American money machine. 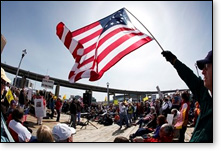 As for the overall infiltration/disruption effort: Tea Party coordinator Judy Pepenella responds to AP, "We've been ignored, we've been ridiculed. Well, now they're coming after us. Gandhi's quote is one we understand. 'First they ignore you, then they ridicule you, then they fight you, then you win.'"