July 5, 2010
Why should we be surprised to learn of a massive Russian spy ring in the United States? The Soviet Union is gone, but...

1  The old KGB agent who wields the power in the Russian Federation appears determined to avenge the loss of the Soviet empire. Oh, the humiliation of it all! Especially at the hands of that American "movie cowboy"! 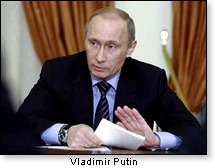 2  President Obama  whose administration is crawling with communists, socialists, terrorist-enabling excusers, and other extremists  apparently was well aware of the Russian spy case at the very time he and Vladimir Putin's sidekick  President Dmitry Medvedev  were chowing down American burgers across the river from the White House, but said nothing about it.

3  Meanwhile, Islamofascist terrorist groups threaten to bring down the West in part, by slaughtering innocent Americans. 9/11 was the precursor of what lies in store. In 1986, a United Nations delegate, Benjamin "Bibi" Netanyahu, had just written a book Terrorism: How the West Can Win. The Cold War was still on in '86 and that was the focus. But Netanyahu (who knew that he would eventually be Israel's prime minister?) told this writer in a radio interview that we should understand the Soviet Union had bankrolled startups and operations of some of the most vile Islamist terror groups in the world. Hezbollah today has been cited as an example.

What was not to be

Pulling all of these threads together, one can only lament that when the Soviet empire finally fell, the Western world was unable to "de-communize" Russia as we had "de-Nazified" Germany at the end of World War II.

We can be thankful that  as Margaret Thatcher pointed out  "Ronald Reagan won the Cold War without firing a shot." The downside to that peaceful ingenious method is that unlike with Nazi Germany, we were unable to march into and occupy the Soviet Union so as to guide that sick nation into the free world.

Hitler died in his bunker at the end of World War II, while Stalin not only did not die, but continued to rule for another 8 years. And his successors carried on his world-conquering ambitions all the way until the lights went out for the Moscow Red rule in 1991. 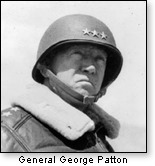 General George Patton was not crazy when he had the foresight to advocate in 1945 that we keep marching straight on to Moscow to take down Stalin and his killers before they get us. Credible circumstantial evidence points to Patton's "accidental" death in Germany as having been engineered by the Soviets with assistance from some of our own people (see Target Patton, 2008).

So today, President Obama refuses to name the Islamist terrorists who aim to kill as many Americans as possible. "War on terror"? Uttered out loud, that's a no-no at this White House.

He bows to monarchs, and kow-tows to the tender sensibilities of cut-throats. He stabs our friends in the back  i.e., caving to Russia on missile defense. That leaves Poland to conclude the word of the U.S. today is worth about as much as it was at the 1945 Yalta conference. That's when Franklin Roosevelt effectively handed Stalin the keys to power  not only in Poland, but the rest of Eastern Europe as well. FDR was a sick, dying man. What's Obama's excuse?

That shameful history is compounded by our baby man president who brushes off Russian spying as being some flyspeck incident  a minor holdover from the past. The man (whose recipe for governance is weakness abroad and the iron fist at home) yammers on and on that planting spies throughout the nation should not get in the way of the great U.S.-Russian alliance forged during the days of "the great patriotic war." 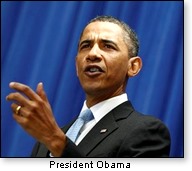 Even there, he steals Stalin's rhetoric. That's what Moscow's mass murderer himself called it  "the great patriotic war." No surprise that a U.S. president immersed in the Marxist worldview for virtually all of his life would be comfortable with Stalinist rhetoric.

Here at home, we called it "World War II," knowing in our hearts it was a war forced upon us when the Japanese bombed Pearl Harbor. The Soviet alliance was widely deemed a matter of reluctant convenience on our part. We knew there was nothing "patriotic" about fighting alongside Stalin  who had helped start World War II by collaborating with Hitler in 1939, entered into a secret agreement with Der Fuehrer to carve up Europe, and stuck with us only because Hitler wouldn't take him back.

Now as to "the spies next door"

The ten people arrested as their "Ozzie and Harriet" covers were blown supposedly were assigned to infiltrate "policy-making circles" in Washington, recruit government and business sources, and use their "deep covers" so as to benefit Russia  even if it would be years before an arrival at substantive action.

It sounds at first blush like a Keystone Kops operation until you consider that 1) Russian intelligence agents reportedly are "as active today as [at] any time in the Cold War," 2) although the agents in this arrest were living up and down the East coast, Andrew Kuchins, director at the Center for Strategic and international Studies tells the Washington Times that sleeper networks of Russian agents continue to operate in other areas of the United States, and 3) as a former KGB agent during the darkest days of the Soviet empire, Vladimir Putin was no slouch as an intelligence professional. On his death bed in London in 2006, a Putin opponent  Alexander Litvenenko  blamed his mysterious poisoning on the Russian leader. True? No one has found a more plausible explanation. KGB agents always were good at not leaving fingerprints on their dirty work.

Under Reagan's leadership, we brought down the old Soviet Empire. We did not end either A) communism or B) the gangster, cutthroat rule in Moscow today. To what extent the two are (or are not) one and the same is irrelevant. They are both a threat. The spread of terrorist-enabling communist regimes in Latin America and Iran's nuclear ambitions have been aided  mainly through back channels  by the Putin regime. Our terrorist challenge from the Middle East was backed by the Soviets. That Russia itself (post-Cold War) has suffered a dose of its own terrorist-aiding medicine (in a school massacre and elsewhere) is secondary in Putin's main goal  bringing down the United States.

Reagan could not invade and occupy Russia in the 1980s. That may have been possible had we listened to Patton in the 40s. Too bad.