September 27, 2010
Transportation issues — like any other debatable causes — can provide fertile ground for those who dash about with propellers atop their heads. This week, we spotlight examples of well-meaning but misguided efforts on both sides.

This column takes a back seat to no one when it comes to the idea of providing "walkable [rail transit-friendly] communities" for those who want it. We would not want it forced on anyone. We are speaking of neighborhoods where one can live, shop, dine out, attend theatre, visit the doctor, and in some cases work in the same vicinity without having to drag a car into the mix.

There is nothing wrong with this, provided it is responsive to a level-playing field market. The very reason that living in such environments is hugely expensive is that government-imposed building codes have made it next to impossible to build them (red tape, expensive permits, etc.). Therefore, 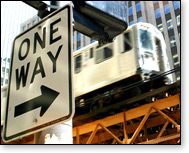 in response to the private market of supply and demand, walkable communities are "high-rent" districts — i.e., low supply/high demand.

Get rid of the building codes forced from the left by government-diktat (separating where we live from where we work from where we shop), and let's see if the demand rises to the point where abundant availability pulls down the cost of living in urban-style communities.

What this column does not support is government-diktat going to the opposite extreme: i.e., "You vill live een an apartment, Herr Vernon! You vill ride rail transit or inter-city rail, Citizen!"

Orders from on high

Don't laugh. There is such legislation on Capitol Hill that has been passed out of committee.

The Livable Communities Act (SB-1619) has been described by its critics as a measure designed to force you to live in a city whether you want to or not.

The screws will be applied to local governments to make sure they toe the "back to the city" line. Through government control of your hard-earned tax dollars, billions would be showered on local jurisdictions that agree to amend their zoning laws and curb any single-family housing projects planned for suburban or rural areas.

Any town or county refusing to go along can expect the "greenies" to harass its local officials for turning their backs on a "free" federal handout. You know the old line (Play it again, Sam): "If we don't take the money, some other town will. So we'd better get with it. After all, it's our money." Ah! Right! So why didn't the feds just leave it in our pockets and let us decide what to do with it?

Blogger Bob Livingston sees this as a plot to force us to submit to federal domination — to end local control.

Supposedly the bill would force your heating and air conditioning bills to skyrocket, pushing you to give up your suburban or rural home and move to the city. A part of that package would be to raise the cost of gasoline, compelling you out of your car.

I love mass transit, but I don't want others to be forced into using it by some top-down order from Washington.

The sponsor of SB-1619 is Senator Christopher Dodd, the scandal-scarred lame duck who rammed it though his Senate Banking Committee. This is parting revenge?

Case #2 — The other extreme

The push-back against the new plans for rail as a legitimate third leg of our passenger transportation network is revving up full force.

We're hearing old stale arguments about how rail is just too expensive and we can't afford it. Never mind that far more federal dollars have been bestowed on air and highway traffic than on train travel — both inter-city and local transit.

Truth be told, we need all forms of transportation. And those who would deny one of the three its rightful place in the mix are suspect of having some kind of grabby power or moneyed interest.

Critics of rail passenger travel cite an old study done by the Silver Dog (Greyhound) purportedly showing that long-distance travelers who have an aversion to flying should be forced into crowded uncomfortable buses. An old argument promoting that line was backed by the late Russell Long, a shill for the bus companies.

And here is the mirror image of the SB-1619 cited above: You vill obey the building codes imposed by our top-down hierarchy. You vill get into your auto and spend the $10,000 per year required to use and maintain eet. You vill live in der suburban sprawl or rural house, Herr Vernon. And no back talk, Citizen, or ve vill haf to force you to walk for miles.

When one owns a car, that person often will ride quality public rail transit. The minute a well-managed rail route — transit or inter-city — is replaced with a bus schedule, the person with a choice will most likely switch to his private automobile. This has been shown to be the case over and over again in study after study. Those who try to force us to ride a bus either do not have the wherewithal to understand that reality or deliberately ignore it since these studies were not bought and paid for by the Silver Dog.

It has been proposed that public dollars be withdrawn from all public transportation, and encourage jitney services which can use cell phones, computer routers, and GPS systems to pick people up and deliver them precisely where they want to go.

Translation: Let's get more rubber-tire vehicles out on the roads. We don't have enough traffic jams in cities anymore or enough vehicles on the Interstates. We need more, more, more. Pour on the concrete. Import more gasoline from nations that hate us. (Note: This writer favors "Drill here! Drill now!")

The pro-jitney argument was thoroughly discredited back in the seventies, as was Senator Long's ode to long-distance bus travel. But they keep hauling the old aging chestnuts out of the closet. Cell-phones, computers and GPS, which we didn't have in the seventies, are not likely to make much difference on this issue today. They would enable the jitney traffic to increase accordingly, jamming the highways and city streets all the more. Transportation would be a nightmare.

The legendary Alfred P. Sloan of GM plotted a dummy corporation to buy up most of the streetcar systems in the nation so as to destroy them and replace them with buses, knowing that most who had patronized the trains would drive rather than ride a bus. (GM and others were found guilty in court of anticompetitive practices.)

Meanwhile, cities and other local jurisdictions taxed the streetcar companies to death (literally), while forbidding them to raise fares.

After World War II, President Eisenhower — faced with a recession in 1954 — vowed that — unlike Herbert Hoover, then the last preceding Republican president — there would not be a depression while he was in the White House. Not on his watch by God! The highway lobby — learning of Ike's concerns — said, "Well, Mr. President, have we got a program for you!"

That's how we got the Interstate Highway system. Like most of his successors, Ike concluded that the path to prosperity was to recycle federal dollars in government spending rather than the more logical path of tax cuts. But that's another story. 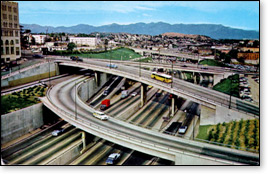 Oh, but aren't the personnel running the trains "civil servants"? Yup. So too are most highway planners and operators, air traffic controllers, and those who plan and in many cases operate airports and who make you take off your shoes at airports these days.

The only mainline transportation mode in the world that is completely in private hands (albeit regulated) is freight rail.

If you don't like it that passenger rail (inter-city and local) is in the public sector, you can blame the anti-competitive practices that nearly destroyed the railroads and the tax-happy jurisdictions that supplied the highwayman's trough. (No, your gas taxes over time have not covered full costs). But most of all, you can blame the federal government — as usual, seeking ever-more power.

Editor's note: Wes Vernon will be taking off a few weeks from his column. The column will resume toward the end of October.