October 21, 2010
In nation after nation, voters for decades have given charismatic Marxists the green light at the ballot-box. In each case, there were glowing promises of a better life — with government "activism" to solve all the problems or "transform" the nation from its allegedly bad old ways.

In nation after nation, once a transfixed majority handed the keys of power to the Pied-Piper of the moment, the hero figuratively abandoned his smiley mask and made Marxist moves intended to lock in his power for life.

Modern-day examples include Hugo Chavez in Venezuela (who so far has succeeded) and Manuel Zelaya in Honduras (who failed, but remember these guys never give up. Please note Daniel Ortega, Sandinista boss in Nicaragua). 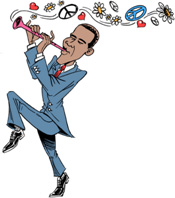 Back in the USA

Here at home, we have the proverbial, almost scripted "emperor with no clothes."

The smiley-faced resonant-voiced savior translated his adoring crowds into votes. It did not take him long to reach for power over the car companies and the banks, and through his appointees, he has set in motion efforts that would ultimately end or curtail your freedom of speech, as well as your freedoms with such lifestyle issues as what to eat, how to set your thermostat, what you should be allowed to drive, and your right to contribute to the candidates of your choice.

What we can do

This president — who runs this country with a chip on his shoulder that barely disguises his contempt for American traditions and values — is in political trouble. Good. We should keep him there.

Our immediate contribution toward that result is to outline some of the choices the voters have in this mid-term election.

There is no higher priority for America this election cycle than to defeat Senator Barbara Boxer (arguably the Senate jester) and replace her with the smart, articulate, and personable Carly Fiorina. For details, see this column posted last Monday "Barbara Boxer: incompetent, divisive, failed senator," 10/18/10.

We said there is no higher priority than defeating Boxer. Notice we left room for a defeat that is equally important. Hot on the heels of Boxer in the clown contest is Senate Majority Leader Harry Reid of Nevada. His gaffes include such prize-winners as that the U.S. has "a voluntary tax system," "Only 36,000 people lost their jobs today...which is really good," "This war [in Iraq] is lost," "Coal makes us sick," and "670,000...700,000 jobs lost. So we've made great progress."

Reviews from most observers are that Reid's opponent — former state legislator Sharron Angle — mopped the floor with him in the Las Vegas debate. A columnist for the liberal New Republic summed it up, "Reid my lips. Last night was a disaster."

Angle scored a knockout punch when Reid attempted to demagogue Angle on her proposal to offer Social Security recipients under the age of 55 the option (not the requirement) of choosing alternatives to the current plan. (No change for those above that age or are already retired).

It was then that Angle shot back, "Man up, Harry Reid, you need to understand that we have a problem with Social Security." That challenge — reminiscent of Ronald Reagan's "There you go again" — was followed by the 61-year-old grandmother's scathing indictment of Reid's raid of the Social Security Trust Fund during his 24 years in the Senate. Noting Reid had racked up about one million dollars in a federal Thrift Savings Plan, Angle added for good measure, "If it's good enough for Harry Reid, it should be good enough for the rest of us."

Angle has fought for Nevada taxpayers in the legislature and in the courts — and won. She would be a fine senator.

Meanwhile in the east, Congressman Pat Toomey, a former House member, is contesting for the open U.S. Senate seat.

Toomey's opponent is Congressman Joe Sestak — good buddy of Bill Clinton's. In 2006, this column covered Sestak's race as he smeared his way into the House (not in Toomey's district; the latter gave up his safe House seat to challenge Arlen Specter in the 2004 GOP primary — the outgoing congressman's effort to dislodge the long-time incumbent fell short by an ultra-slim margin).

On Wednesday of this week, Toomey struck back at Sestak's Reidlike attacks on the Social Security issue.

Like Angle, he too believes in reform of Social Security without interfering with the commitment made to those who are retired or near retirement. Sestak's only idea of entitlement of reform, charged Toomey, is to raise taxes and cut benefits.

The Social Security issue resonates in Utah, where the tradition of helping each other was illustrated during the Great Depression when descendents of the state's pioneers organized their own (church-run) welfare program.

The Republicans' U.S. Senate candidate is Mike Lee — who defeated incumbent Robert Bennett at the state's GOP convention (and about which this column reported to you last June), and went on to defeat a primary opponent. (See this column last June when all of this was spotlighted, as were Lee's qualifications.)

Mr. Lee — deservedly a Tea Party favorite and also backed by Senator Jim DeMint's conservative PAC — scores the current business-as-usual attitude on entitlements, including Social Security. To allow $50 trillion (that's trillion with a "tr") to pile up in Social Security, Medicare, and Medicaid indebtedness "is irresponsible," he says, while adding that current beneficiaries "must be held harmless."

Among Lee's issues are to end deficit spending, strengthen national security, reform the tax system, reduce government regulations, end the era of the lifetime politician, enforce existing immigration laws, and invest in technology, personnel, and physical infrastructure to secure the southern border. And those are just for starters.

Lee's Democrat opponent is a deli owner named Sam Grenato, who from all reports is a likeable guy. So was Harry Reid when he first ran. Some "likeable guys" have been known to do strange unlikeable things when they get to Washington.

Grenato's small business background did not distract the National Federation of Independent Business, which enthusiastically endorsed Mike Lee. The nonpartisan NFIB — founded in 1943 — declared, "Our small business membership in Utah knows that Mike will champion policies that will help small businesses do what they do best: create jobs and grow the economy."

My friends and relatives in Utah assure me that Mike Lee is a shoo-in. Maybe, but I don't trust these "sure things." No student of "President Dewey" (that's Thomas E., whose presidential aspirations were upended by President Harry Truman in 1948) takes anything for granted. Mike Lee's campaign is doing well, but sometimes surprises can sneak up in the final days of the effort. Lee deserves your support.