October 28, 2010
Democrats in Nevada have been accused of using strong-arm tactics best symbolized in recent years by the likes of ACORN and SEIU, so as to steal the election for Senate Democrat leader Harry Reid. 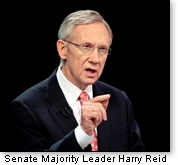 The "funny business" started when voters in Boulder City (near Las Vegas) showed up to cast their (early voting) ballot for Reid's Republican opponent, Sharron Angle.

Within five minutes, they reported that Senator Reid's name had already been checked.

Joyce Ferrara, one of the Angle voters, dismissed claims by Clark County Registrar Larry Lomax that there is no voter fraud and that "elderly citizens" may find the touch screens "very sensitive." (Translation: "You stupid old people.")

"Something is not right," Ferrara insisted. "One person, that's a fluke. Two, that's strange. But several within a five-minute period of time, that's wrong."

Cleta Mitchell — candidate Sharron Angle's attorney — charges that "Harry Reid intends to steal this election if he can't win it outright." On behalf of the campaign, Mitchell has demanded investigations into such tactics by Reid supporters as offering free food and Starbucks gift cards for a vote in support of the senator.

Ms. Mitchell alleges that Nevada Secretary of State Ross Miller — a Democrat — "slammed the door shut on this behavior and issued a public statement permitting these ACORN-style tactics."

A few hours later, however, Miller announced that he was launching a probe into Republican allegations of early voting irregularities not only in Clark County, but in Washoe County (Reno) as well.

The Angle campaign's supporters — most of them small donors (in contrast to Reid's fat lobbyist/special interest war-chest) — are coughing up the funding required to "deploy literally dozens of election law attorneys and poll watchers to combat these tactics."

Traditionally, the office of Secretary of State on the state level has been a rather nondescript, non-controversial office. Not anymore. These are, after all, the people who count the votes.

The Left (mainly ACORN) has worked to get "its own people" to seek that office, figuring that when it comes time to steal elections, their tactics can get an official stamp of approval — deserved or not. Nevada's Miller, however, cites his own legal battles with ACORN months ago.

Cleta Mitchell — one of the best election law barristers in the country — cites Nevada Law (NRS 293.700) which provides that "A person who bribes, offers to bribe, or uses any other corrupt means directly or indirectly, to influence any elector in giving his or her vote or to deter the elector from giving it is guilty of a category D felony, and shall be punished as provided in NRS.193.130."

Miller says so far there is "no evidence" of the chicanery. So what does that say to the honest Nevada voter? If you suspect your vote may be being canceled out by an ACORN goon, better show up at the voting booth with a camera, a lawyer, and a notary public?

Just to compound the suspicion

1 — Clark County, home of 75 percent of Nevada voters, is where Harry Reid's son Rory — a gubernatorial candidate — is also a county commissioner.

2 — The voting machine technicians in Clark County are members of the SEIU.

3 — In Nevada alone, the SEIU has given $500,000 to the Harry Reid campaign against Sharron Angle — perfectly legal but relevant to the above-cited circumstances.

Washington Examiner columnist Mark Hemingway writes that while there is "no verifiable evidence of chicanery with the voting machines (yet)," all this raises the question: Should SEIU members be responsible for tabulating votes? Is there "an appearance" of conflict of interest?

(Hmmmm. SEIU icon Andy Stern is reportedly the most frequent visitor to the White House? Hello. Fawncy meeting you here!)

In Bucks County, Pa. (suburban Philadelphia), three county residents — with the backing of the county GOP committee — claim to have evidence that ties the campaign of incumbent Democrat Congressman Patrick Murphy to a huge onslaught of fraudulent applications for absentee ballots.

The Republicans cite the name of Murphy's campaign manager appearing on the P.O. Box where voters were urged in a series of letters paid for by the Pennsylvania Democratic Committee to send state absentee ballot applications. Some people listed deny having requested the absentee ballots.

County Democrats deny any wrongdoing. Bucks County has a "moderate Republican" history, though party registration in recent years has tended to be more evenly divided between the parties.

Other campaign monkey business has been reported in such far-flung locations as Yuma County, Arizona; Harris County, Texas; Troy, N.Y.; and North Carolina.

Christine O'Donnell — the Tea Party GOP candidate for the U.S. Senate in Delaware — got into a recent go-round on "separation of church and state" with her Democrat opponent, Chris Coons.

Coons thought it was the federal government's job to prevent local school boards from deciding whether to teach evolution or "intelligent design" (not necessarily the same as creationism). O'Donnell preferred to leave that to the local school officials.

That reflects the ignorance our law schools are imparting these days. Here is the exact wording of the First Amendment to the Constitution:

Congress shall make no law respecting an establishment of religion, or prohibiting the free exercise thereof; or abridging the freedom of speech, or of the press; or the right of the people peacefully to assemble, and to petition the Government for a redress of grievances. (BTW: Note the Founders eschewed the split infinitive. We could use that mindset in today's newsrooms.)

Nowhere — but nowhere — is the term "separation of church and state" used. The "establishment of religion" clause was penned because the British Crown had subjected the colonies to the officially government-sanctioned Church of England. That's it.

Though some politicians in black robes have tried to read other meanings into some individual cases, the Constitution says what it says.

DuPont's stewardship in the statehouse (1976-1984) is remembered fondly my most Delawareans. His low tax policies ushered in a period of good times that meshed quite well with the overlapped years of the Reagan presidency (1980-1988).

The former governor attended both of the O'Donnell-Coons debates before his decision (DuPont's Lt. Governor during his second term was Mike Castle — subsequently succeeding DuPont, and defeated by O'Donnell in a hard-fought Senate primary a few weeks ago).

"On Election Day," wrote DuPont, "the question is: Who will help correct the negative policies that have hurt our nation over the past few years." The former governor added, "It is my belief that Christine O'Donnell will represent the First State honorably in the United States Senate."

The Ruling Class has belittled O'Donnell, but she has a solid outlook and understanding of this nation's values.

In a classic Tea Party romp, Republican Rand Paul defeated an establishment Republican and (as of last check) was 7 points ahead of his liberal Democrat opponent, Kentucky State Attorney General Jack Conway, whose broadsides against Paul on charges going back to his college days and challenging his faith have backfired.

This column believes Paul won Kentucky's U.S. Senate debate Monday night. He backed such policies as turning the school system more in the direction of local control. He advocated lowering tax rates, and said the U.S. should go to war reluctantly only as a last resort.

In Alaska, incumbent "moderate" Republican Sen. Lisa Murkowski — having been defeated in the GOP primary — played the sore loser role and determined to run anyway as a write-in candidate.

That made Murkowski the object of ridicule in an independent ad campaign by Colin Hanna's Let Freedom Ring, dubbing her "spoiled Princess Lisa." (She was originally appointed to her Senate seat by her father, who was governor at that time. He then was defeated in his primary by Sarah Palin, who this year backed Murkowski's GOP opponent, Joe Miller.)

Though new to the political scene, Miller is no lightweight: West Point graduate with honors in political science; Bronze Star for combat leadership in the first Gulf War; law degree from Yale. Also military judgeships.

Among Miller' issues: limiting government to the powers anticipated by our Founders; repeal Obamacare and replace it with reform promoting robust employer and/or health savings accounts; unequivocally pro-life.

As of this writing, Miller and Murkowski were in a right race. The Democrat candidate Scott McAdams was lagging far behind.