Wes Vernon
Obama's personal army: him vs. you and me?

February 24, 2011
As far back as the 2008 presidential campaign, then-candidate Barack Obama let slip a vision for his own personal civilian army. 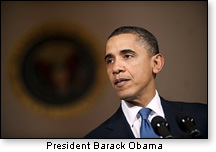 Not to protect you and me from enemies of this country, which is his number one constitutional responsibility.

No, what he seems to have had in mind — demonstrated again just in the last few days — is a special force to push back against what he perceives as his own personal political enemies (i.e., anyone who disagrees with his agenda).

Laying the groundwork for the future?

"The president's political machine worked to [help] thousands of protesters to gather in Madison [Wisconsin] and to plan similar demonstrations in other state capitals."

That of course refers to the thousands demonstrating against Governor Scott Walker. Wisconsin's teachers have problems with the governor's insistence that they pay a small percentage of their health and retirement benefits, though they now indicate they may be willing to give in on that. But the governor also says the state can no longer afford to pay for all the collective bargaining rights the public sector employees demand. Oh, those greedy taxpayers in the private sector who pay far more for their health and retirement benefits than do most public employees.

Mr. Obama will need the organized public employees next year when he seeks re-election. His "machine" is named Organizing for America. He counts on them to be there for him, in terms of money and "political activism." (The latter not necessarily restricted to peaceful petitioning. See Rep. Mike Capuano — D-Mass. — who says, in supporting demands of public employees, that "it's time to get a little bloody." Welcome to the liberal "new civility.")

So the Washington Post delicately describes the force being brought to bear on the side of the Wisconsin teachers as "the president's political machine."

What is Obama's "machine"?

For what must be the third or fourth time, this column harks back to a campaign promise Barack Obama made when he was seeking the highest office in the land:

"We cannot continue to rely only on our military in order to achieve the national security objectives that we've set. We've got to have a civilian national security force that's just as powerful, just as strong, and just as well-funded."

Read that again. Previously in this space, we wondered: Exactly what would that military-style civilian force be asked to enforce? What orders from the White House? Would the local police be displaced? Who would be targeted by a "national security" force that's just as strong and "well-funded?"

As coincidence would have it, we were reading the Washington Post article about the Wisconsin battle just as we were also in the midst of the book The Blueprint. In that tome, authors Ken Klukowski (attorney for the American Civil Rights Union — not to be confused with the ACLU) and Ken Blackwell (former Ohio Secretary of State) cite yet another interesting quote — this one from Rahm Emanuel, Obama's former White House Chief of Staff.

The incoming windy city Mayor (who no doubt intends to rule — literally and figuratively — the "Chicago way") picked up where his president left off:

"Citizenship is not an entitlement program. It comes with responsibilities. Everybody between the ages of 18 and 25 will serve three months of basic training and understanding in a kind of defense. That universal service — somewhere between the ages of 18 and 25 — will give Americans, once again, a sense of what they are to be American and their contribution to a country and a common experience. As you look at World War II, now that was a draft — this is not a draft. It is universal service."

"The Blueprint" — co-authored by an attorney who has practiced before the Supreme Court (Klulowski) — cites the Emanuel statement (owning civilians the way the government owns those in the military) as a possible violation of the Thirteenth Amendment to the Constitution.

Then there is this gem by First Lady Michelle Obama:

"Barack Obama will require you to work. Barack will never allow you to go back to your lives as usual, uninvolved, and uninformed." (Another Thirteenth Amendment challenge — i.e., a Good-bye America moment.)

Wait until next term

For now — as far as we know — Obama's private army in Madison assisting the sixties-style rally of teachers who were carrying signs with blatant misspellings (including "are" for "our") — is funded through private resources. We don't know that for certain, and you never can be sure with this crowd of leeches. Even so, it's the Wisconsin taxpayers who are expected to pay — and pay and pay and pay. Never mind that the reading skills of the states' eighth grade students are among the worst in the nation. That raises the legitimate question as to whether the teachers shouting their slogans on TV are worthy of their current pay, let alone whatever they can get from a fat new contract.

But remember, President Obama has a re-election battle to fight next year. If he wins, he goes into four years without having to worry about voter push-back. Will he then increase the strong-arm of government power against his constituents (in disregard of constitutional restraints)?

On paper, it is made to appear that ACORN, the notorious longtime Obama ally, has disbanded. That is so much eyewash. The ACORN coalition groups are still together — under whatever name — ready and willing to do their master's bidding.

And what policies are they willing to "enforce"? Well, they support abortion on demand, the end of the death penalty, amnesty for illegal aliens, government-run health care, more taxpayer-funded housing (a major cause of the 2008 crash). That would be bad enough, but then consider they also favor establishing a completely state-bossed media (under whatever pretense); support for our enemies and neglecting or betraying our allies; and of course ignoring internal threats perpetrated by the Radical-Islam/Hate-America-Left alliance. All that is just for starters. (There are space limitations here.)

Worse than you think?

President Obama wants a civilian force as "well-funded" as the military? Then we're talking about $534 Billion on an annual basis, according to recent military budget figures.

A regime can buy a lot of silence and/or support with that kind of money as its thugs roam the land at will. Flush with resources from the "well-funded piggy bank," the powers that be can also blanket the country with pro-government propaganda once those pesky opposition radio/TV commentators are silenced. 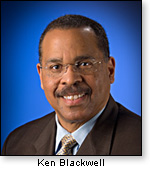 As Blackwell and Klukowski have noted, "The worst regimes in the world have had such organizations, from the [Nazi] Gestapo to the Soviets' KGB."

The authors have noted that it is difficult even to discuss such matters, because right away, such talk conjures up "'black-helicopter' conspiracy theories."

But when a president gives birth to such thoughts by his own comments, he owes the voters an explanation as to what he means by those words. Isn't that reasonable?

And what happens to those who resist "universal service?" Will it then be "time to get a little bloody?"

Why then are the above quotes by the Obamas and Rahm Emanuel so little known? Have the media — our alleged "watch-dogs" — gone AWOL again? Hello? — Anybody home? Time to wake up!