March 29, 2011
THE BLUEPRINT: OBAMA'S PLAN TO SUBVERT THE CONSTITUTION AND BUILD AN IMPERIAL PRESIDENCY
By Ken Blackwell and Ken Klukowski
Lyons Press, 22.95, 304 pages 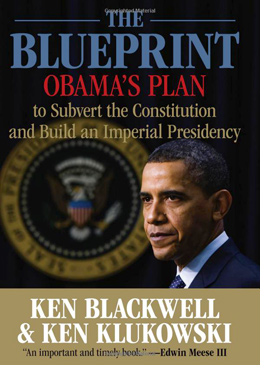 What we have here is a part-tutorial on the Constitution, part-legal brief for making Barack Obama a one-term president and (some would argue) a credible case of grounds for impeachment of the president, though that option is not emphasized by the authors.

In "The Blueprint: Obama's Plan to Subvert the Constitution and Build an Imperial Presidency," authors Ken Blackwell and Ken Klukowski trace a pattern seen elsewhere in the world outside our United States. They find:

President Obama doesn't like it that lawmakers won't give him all the powers he seeks. No problem: Just issue executive orders circumventing Congress. Never mind that executive orders are meant to adhere to the law and the Constitution, not to dodge them.

Mr. Obama is annoyed some Cabinet nominees have difficulty at Senate confirmation hearings because of their radical views. No problem: Just appoint unconstitutional confirmation-avoiding czars to do the dirty work, with some Cabinet officials as figureheads.

The president is nonplussed that courts have cited constraints on a president's reach for unconstitutional powers. No problem: Just ignore the courts.

He is irked that some U.S. laws that he is sworn to uphold are an inconvenience. No problem: Just appoint judges who will cite international law to his liking.

Some well-informed readers may bypass this book, reasoning they already know Mr. Obama disdains the Constitution and seeks an imperial presidency. Perhaps the publishers could have crafted a more personalized "hit-between-the-eyes" title. However, the reader will find nuggets of information that are in fact "sensational."

If the above-cited record of the president suggests a police state mindset, a comment out of his own mouth won't lay that concern to rest.

In a speech Mr. Obama delivered in the 2008 campaign, the candidate intoned, "We cannot continue to rely only on our military in order to achieve national security objectives that we have set. We've got to have a civilian national security force that's just as powerful, just as strong and just as well funded."

A civilian "security" force, as "well funded" as the military whose recent budget was pegged at $534 billion? And to whom would that behemoth report for its orders? Would the local police be displaced? These are legitimate questions to which the hapless McCain campaign in 2008 did not elicit answers.

A relatively minor hint as to what might have been a dry run of the civilian army (once Mr. Obama is safely re-elected and beyond the reach of voter outrage) came during the riotous demonstrations in Wisconsin by public employee organizations whose members work for the taxpayers.

Media outlets reported that Organizing for America (described in the liberal Washington Post as "the president's political machine") had worked to assist "thousands of protesters to gather in Madison, [Wisconsin] and plan similar demonstrations in other state capitals."

After first boasting of its involvement, the administration denied it (perhaps not wanting anyone to catch on to an unwritten agenda before the 2012 votes are counted?)

The 2008 campaign statement by Mr. Obama is not the only ominous hint at unpleasant post-2012 civilian deployments. Mr. Klukowski (an American Civil Rights Union attorney who has practiced before the Supreme Court) and Mr. Blackwell (a former Ohio secretary of state) cite statements by Michelle Obama that her husband "will make you work," and Rahm Emanuel, Chicago mayor-elect and former top White House aide, as calling for "universal service, somewhere between the ages of 18 and 25."

"The Blueprint" reminds us compulsory civilian service ("involuntary servitude") violates the 13th Amendment to the Constitution and that "the worst regimes in the world have had such organizations [the Gestapo and KGB are cited]." Nonetheless, the book acknowledges it is difficult to discuss the matter because such talk conjures up "'black helicopter' conspiracy theories." But when three administration officials, including the president himself, prompt such thoughts by their own words, shouldn't they be required to spell out exactly what they mean?

Mr. Klukowski and Mr. Blackwell see an administration pushing for international regulation of economic activity and the breakdown of state sovereignty.

On immigration, the authors favor constructive ways in which temporary alien residents can contribute but contend that amnesty for illegals would forever turn America into a socialist state.

They charge the administration is embracing a militant secular culture and seeks (through media control) to "imprison your mind."

If a conservative is in the White House starting in 2013, given possible retirements and replacements, there is an excellent chance we will get the first solidly conservative Supreme Court since 1936. On the other hand, if Mr. Obama is re-elected, this book predicts "we will not only have the most liberal Court, but it will be the most liberal in history. And we will have this liberal Court for at least a quarter-century."

If that alone doesn't galvanize the right, it's difficult to fathom what will.