August 1, 2011
In 2008, Americans wanted a "different kind" of president. They got one, but the buyer's remorse in 2011 is pervasive. The much-maligned Tea Party movement — initially a populist pushback to Obamacare — symbolizes that regret. 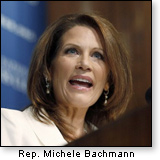 In 2011, disenchanted Americans are again seeking a change. The very fact that the Tea Party movement is leaderless — with momentum sustained purely by the omnipresent wavelength of grassroots common sense — leaves establishment liberals sputtering. There is no one individual whom they can demonize. It frustrates them to no end that this time, they can't put a "face" on an impudent "plain folks" uprising that threatens their perceived intellectual royalty.

Result: the Tea Party-backed invasion of Capitol Hill, exemplified by Tea Party Caucus founder Michele Bachmann. Even that group has to be careful not to imply it speaks for anyone but itself. Tea Partiers out there prefer to speak for themselves, thank you.

Bachmann has entered the 2012 Republican presidential fray. Her reception in the mainstream media has been generally respectful, even if not totally uncritical. Since she is one of the "tea party-favorite" Republicans to vote against several of Speaker John Boehner's proposals to deal with the deficit, this column decided to take an up-close look at this woman, to get some perception as to her campaign style and philosophical substance.

So off to a National Press Club luncheon where the candidate spoke. I could have watched it on television, but sometimes there's nothing that provides a better prism through which to determine what a public figure is all about than to see the person in the same room. (For the record, this column has not endorsed a presidential candidate and may not do so until next year's conventions are behind us and we're into the final showdown.)

Congresswoman Bachmann is consistent on the spending issue. Most ideas bandied about in the debt ceiling battle have failed to meet her "above-all-else" standard — i.e., real reform of spending in Washington. That is her yardstick. In her view, raising the debt ceiling for any reason may solve the short-term politics of the problem, but won't solve the problem.

The (Paul) Ryan budget earlier this year attracted a yes vote from Bachmann, but with an asterisk saying she thinks it should have been coupled with repeal and defunding of Obamacare. The Minnesotan also supported the much stronger version proposed by the conservative Republican Study Committee (RSC), which consists of two-thirds of the House Republicans.

However, Bachmann was one of only nine Republicans to vote against the Cut, Cap, and Balance bill that would have slashed spending and sent to the states an amendment to the Constitution that would have capped spending in such a way that the budget will be balanced. Though she favors those provisions, Bachmann voted against the bill because it also would have raised the debt ceiling by $2.4 trillion. (Five Democrats voted for Cut, Cap, and Balance which passed the House but met its expected grave in the Senate.) 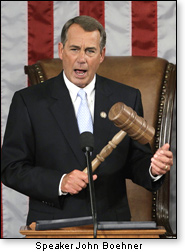 As Congresswoman Bachmann was speaking to us, the House was preparing to take up the Boehner Bill, which she said she would also oppose (one of only 22 Republicans to do so) because it too would raise the debt ceiling, even though it also included the balanced budget amendment. (You know what happened since then, so we won't review it.)

Bachmann told her sold-out luncheon audience at the Press Club that to vote for a hike in the debt limit would betray hundreds of Americans she has met on the campaign trail. Specifically, she recalled the following:

The scene was a factory whose workforce numbers had been slashed in the Obama economy. One of the workers who looked to be nearing retirement wage, and with sweat rolling off his body, looked at the plant's visitor, and said, "Michele, if you get to be president, will you listen to the American people?"

Receiving a solemn response in the affirmative, the man went on to add, "I'm going to be okay. I'm just concerned for my grandson."

That man sees the youngster paying the price when "the music stops," and he has to pony up for our generation's out-of-control debt.

Or flash back to a time when she was a small child growing up in a family of Democrats. Her father was listing the Democrat spending programs he supported when her grandmother — the only Republican in the family — said to him, "But son, you and I won't pay for all that. Michele and Davie (Michel's brother) will."

Many solid conservatives think Speaker Boehner is doing as much as possible, given that you can't run the country from just one house of Congress (especially when your Marxist opposition rules in the White House). Whatever one thinks of the Boehner bill, Bachmann makes the case for those who believe we won't solve the debt problem by giving the political class more money to spend. Polls indicate Americans agree. 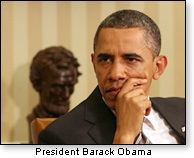 The core problem, Congresswoman Bachmann reiterated, is not lost on millions of Americans, including 2008 Obama voters — who see the president's hapless performance in the debt talks. Indeed, there is a raging debate over whether the man in the White House is deliberately bringing America down or is just incompetent.

The congresswoman from Minnesota, first elected to the House in 2006 while bucking the tide in that year when the Democrats toppled the Republicans from congressional control, is alarmed that the debt is "almost double what it was when I came to office."

The presidential hopeful is not playing with fire. She believes the market slide during the previous week was attributable mostly to the prospect that America will plunge recklessly into further indebtedness. "You can't fool the markets," she added, accusing the administration of trying to scare seniors and veterans. She assured her audience that "we will maintain the full faith and credit."

Mrs. Bachmann said too that neither markets nor the American people at large would be fooled by Democrats' "phony" cuts, including already factored military cutbacks in Iraq and Afghanistan. By that logic, the lawmaker added, you could say we're cutting the budget by having no plans to invade Canada.

When you're a member of Congress, and you can reasonably rely on the friendly folks back home to support you, you can make a rhetorical stumble and it will likely be forgiven and forgotten. But when you start mixing it up in presidential politics.....

Bachmann has learned her every syllable is magnified for good or ill. Appearing on Fox News' O'Reilly Factor, she said her priorities in budgeting are to pay the interest on the debt, pay our troops and maintain military readiness, and also support the "must haves," meaning Social Security and Medicare recipients. The rest, she said, would be "tough love."

A few minutes later, appearing on the same show, Fox News senior analyst Brit Hume (no liberal) wondered aloud as to whether Bachmann would consider meat inspectors expendable in the interest of "tough love." As the congresswoman would later tell the Press Club, she was sure that "every dot and tiddle" of her comments were fair game. But it's early in the game.

Bachmann got a good reception at the Press Club, but she is smart enough not to mistake that for approval. She started her luncheon talk by saying to the gathered scribes that if she were not humbled by the invitation to speak there, "I'm sure I will be by the time we're finished." That was coupled with a recollection that Ronald Reagan in 1980 "ignored the editorial boards" and went straight to the people.

Michele Bachmann has to know it is only a matter of time before she gets the Sarah Palin treatment, not just from the mainstream media, but from the liberal establishment in general.

As if anticipating that every conservative woman must expect the smear bucket, she recalled growing up with three brothers and no sisters. The boys understood it's best not to "take on your sisters. It won't work." She will be ready for whatever comes — and in the opinion of her backers — would be prepared to take on the responsibilities that go with becoming "Madam President."