October 3, 2011
With two very high-profile enemies of the United States now out of the way, President Obama can claim — what? Not "Mission accomplished."

It is gratifying of course that U.S. fighting forces saw to it that Osama bin Laden and Anwar al Awlaki met their deserved fates. But terrorists worldwide are ready and able to pick up the pieces and carry on from where they left off. The Islamist war against the United States will not miss a beat.

Almost in the same news cycle as the al Awlaki killing by a drone missile came news of the arrest of a Framingham, Massachusetts, man in an alleged terror attack. Authorities said Rezwan Ferdous had plotted (with undercover FBI agents he thought were al-Qaeda operatives) to pack remote-controlled planes with high explosives to be deployed in simultaneous attacks against the Pentagon and the U.S. Capitol Building.

The plots just keep on coming

Investigative reporter Erick Stakelbeck was tipped by one of his many Jack Bauer-type contacts of a bomb found on a Qatar Airways flight. The same day, a similar bomb was found on a UPS cargo plane in Great Britain. Both packages were addressed to synagogues in Chicago.

America is under assault 24/7, with multiple attacks planned, attempted, or actually pulled off (Ft. Hood) since 9/11. The attacks had begun at the end of the Cold War (actually there was some overlap). It took the nearly 3,000 victims of 9/11 to awaken the American public to the fact that enemy attacks were not sporadic acts of crazed individuals, but the result of ongoing efforts to bring the United States to its knees.

The return of an ancient hostility

What we are witnessing is the revival of a 1400-year war by radical Islam to dominate the world. In the current era, the United States and other Western nations are viewed by the Islamists as the chief obstacle in their drive for dhimma — an Islamic society granting limited rights to adherents of Christianity, Judaism, Buddhism, and certain other non-Islamic religions.

And that's the mildest version. In some parts of the Middle East, for example, Christianity is a capital offense. 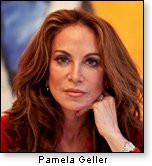 As Pamela Geller in Stop the Islamization of America puts it, "We are not against Islam or Muslims, as such, but against the supremacist character of Islam as enunciated by the Muslim prophet Muhammad that 'Islam must dominate.'"

Driving the worldwide movement is the Muslim Brotherhood, deeply embedded in the so-called "Arab Spring" which has been toppling "bad guy" Middle East governments, only to replace them with Islamists who are worse. The "Brotherhood," according to captured internal documents, is dedicated in America to "a kind of grand Jihad in eliminating and destroying Western Civilization from within and sabotaging its miserable house by their own hands and the hands of the believers...."

Omar Ahmad, co-founder and board chairman of the leading Muslim "civil rights" group — the Council on American-Islamic Relations [CAIR] — has said, "Islam isn't in America to be equal to any other faith, but to become dominant. The Koran should be the highest authority in America, and Islam the only accepted religion on earth."

That same sentiment has been expressed by CAIR spokesman Ibrahim Hooper, whose day job seems to be to undercut and smear anyone who expresses concern about the very words uttered by a CAIR official who warns the United States will fall unless it "accepts the Islamic agenda."

Among the more violent assaults (attempted or otherwise) on the U.S. and the West, of course, are the foiled 2009 attempt to bomb the New York city subway system; the foiled Times Square bombing in 2010; the 2009 attack on an Army recruiting office in Little Rock, Arkansas, that left one soldier dead and one wounded; the successful jihadist massacre in Ft. Hood, leaving 13 dead (where the corrupt media went out of their way to obscure the Islamist connection — see this column "Obama media bible for Americans: Thou shalt not name thine enemy," 11/9/09); and the foiled 2010 attack at a Christmas tree lighting in Portland, Oregon.

Americans have good reason for concern that Iran, which may very well have missiles able to reach the United States by 2015, has an ally in our own back yard in the regime of Venezuela's Castroite Marxist Hugo Chavez.

The terrorist next door

As referenced above, not all assaults on America and the West resort to immediate violence. The enemy is making inroads by "stealth Jihad," the attempt to insert "Sharia law" into America's legal infrastructure, the better to take us over before we've been alerted to fight back. 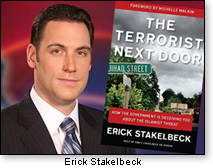 Erick Stackelbeck, in The Terrorist Next Door, outlines a comprehensive list of just what Sharia law would mean if and when the day comes that it has replaced the Constitution. And make no mistake: our Founding Document is the exact opposite of what Sharia Law has in store for us.

In recent years, Islamists and their apologists have been sneaking (yes, that is the word, since there is nothing in American law that sanctions it) — have been sneaking or attempting to sneak Sharia law into state and federal statutes — and for that matter into the statutes of other Western nations.

The people of Oklahoma decided to stop that nonsense in its tracks. On November 2, 2010, by an overwhelming 70 percent vote, they approved a ballot initiative that would require the courts to rely on state or federal statutes when ruling in court cases. In other words, no Sharia law.

Islamist groups in the state immediately served notice they would file a lawsuit to overturn the will of Oklahomans.

On November 29, an injunction was issued by District Judge Viki Miles-La Grange, a Clinton appointee, barring implementation of the measure. The injunction allows her to hear arguments on both sides. The ACLU later weighed in with its own brief challenging the voter-approved ban.

The judge claimed in her ruling to have seen "no evidence which would show the amendment was justified by any compelling interest." And you wonder why there is serious discussion in some quarters of ending lifetime judicial appointments?

Though the media have done their best to ignore it, there have been some "honor" killings where Muslim fathers have credibly been charged — and managed to get away with — murdering their daughters, and Muslim husbands have been accused of beating and murdering their wives. It seems strange that Oprah Winfrey and others on cultural TV talk shows have not seen fit to focus on these cases.

Pamela Geller had to draw a picture (figuratively) for Richard Durbin, arguably one of the dimmest bulbs in the Senate, explaining that "frankly, no one gives a fig what they worship," but we have a right to our safety and constitutional protections.

Presumably we will — again — have to learn the hard way — if we're lucky, before it's too late — that freedom requires an informed public. Night-and-day, we are taking a pounding on many different fronts, aided by an Orwellian assault on the English language.