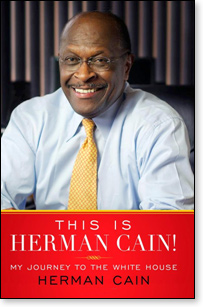 Herman Cain has had little money and almost no organization. That may change since his "breakout from the pack" drive for the Republican presidential nomination has gained traction.

That determined mindset permeates every page of his memoir, "This is Herman Cain! My Journey to the White House." If that sounds presumptuous, one has to understand Herman Cain, who informs the world, "Losing is not in my DNA" — a confidence not to be confused with arrogance.

The political newcomer, best known until now as "the Godfather's Pizza man," appears here as authoritative but affable. His business contacts have come away from strategy meetings describing the former corporate CEO and Atlanta talk-show host as one who "knows what he's talking about" without being disrespectful. Indeed, humility is part of his persona. Every chapter in the book is prefaced by a biblical passage.

In Mr. Cain's travels, he finds the popular disconnect with President Obama and his administration "unbelievable." If this candidate becomes America's second black president, be prepared to see the "community organizer" replaced by a self-described "community energizer." In terms of infectious "can-do" charisma, the last president to come closest to the sheer ebullience of the Herman Cain personality was Theodore Roosevelt, and TR's issues were different (including Teddy's post-presidential flirtation with socialism, which would not appeal to Mr. Cain).

Those qualities have served him well in the private sector, where he mounted the corporate ladder and, like a rocket, vaulted to vice president at Pillsbury and scored one success after another. Never satisfied to stand still, the author-candidate gave up the comfortable VP slot to take over and turn around Pillsbury subsidiaries — first Burger King and then Godfather's Pizza — eventually purchasing the latter. 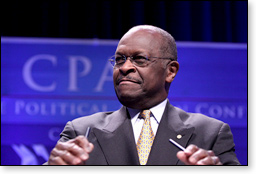 Unsurprisingly, this man who always maps out his plans way in advance has set the mental table for how his hoped-for presidency would proceed, starting with details of his Inauguration Day.

First, there would be just one inaugural ball, as opposed to past precedent when about a dozen such celebrations have been scattered throughout Washington. Instead, "Mrs. Cain and I will host a series of celebratory occasions ... spread out during my first months in office.

"[W]hile I respect those who have served before me, I will not follow in their footsteps. I will create new footsteps," the would-be 45th president of the United States vows.

His state-dinner guest lists "will be light on A-list celebrities and heavy on normal Americans who work each day to restore our nation to greatness," thus enabling him to "take the nation's pulse" on the issues and "stay connected to the people." And no "paying guests" in the Lincoln bedroom.

"This is Herman Cain" apparently went to the printer before the candidate completed the formulation of his "9-9-9" tax plan. However, no review of this book would be in proper context without including the update.

The candidate's memoir makes it plain that, yes, he will move to slash corporate and personal income taxes and include a "fair" tax on sales. All three would be programmed to a specific 9 percent, more than offset by elimination of other taxes (i.e., capital gains and death taxes) plus revenue flowing into the Treasury and the economy as a result of jobs created by his non-tax policies, such as developing America's abundant energy resources, which the Obama administration has stifled.

His 9-9-9 plan will continue to be dissected carefully by media (friendly and unfriendly) as well as by rival candidates as long as Mr. Cain assumes front-runner or near-front-runner status. Some critics think that over time 9-9-9 could morph into, for example, 40-40-40. But the candidate favors a legislated two-thirds vote of the House and Senate in order to raise those percentages. That, in turn, would require cooperation of future congresses. 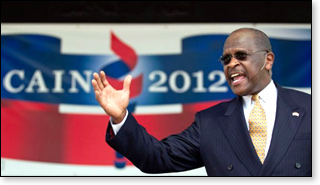 Herman Cain, the unconventional candidate, has been quietly attracting serious consideration from conservatives who see him as competent, honorable and so unimpressed with "business as usual" that "this time it really could be different."

One such activist, Let Freedom Ring CEO Colin Hanna — defined by the candidate as his "good friend" — opines that from what he has seen up to this point, "Herman Cain is our 21st-century Ronald Reagan. Just as Reagan went over the heads of the media to the people, so Herman Cain is going over the heads of the [Republican] party establishment and its consultariat to the people. And it's working."

So far, that is. This book outlines the candidate's vision. Now comes the hard part: withstanding the inevitable slings and arrows.