March 5, 2012
THE SECRET WEAPON: HOW ECONOMIC TERRORISM BROUGHT DOWN THE U.S. STOCK MARKET AND WHY IT CAN HAPPEN AGAIN
By Kevin D. Freeman
Regnery, $27.95, 220 pages

The 2008 market crash was an (unofficial) act of war on the United States. That is the thrust of Kevin D. Freeman's carefully documented "The Secret Weapon: How Economic Terrorism Brought Down the U.S. Stock Market and Why it Can Happen Again." He does not dismiss a theory of Spain redux. 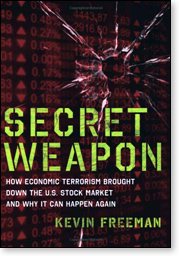 Noting "al Qaeda's successful attempt to change the Spanish government by bombing the Madrid train system just before Spain's 2004 elections," the author writes, "bloggers asked whether al Qaeda may have reprised the tactic in Washington using a financial attack instead of a bombing." Not incidentally, it wiped out John McCain's lead in the presidential campaign, facilitating Barack Obama's November victory.

But Mr. Freeman, founder and CEO of Freeman Investment Counsel, thinks the '08 disaster likely transcended any effort to drive an election outcome and aimed to bring America to its knees. His suspects include Islamic finance, communist China, Russia, Venezuela and non-nation terrorist groups.

Some have eyed left-wing billionaire George Soros with suspicion. Though the wealthy bete noir of conservatives did profit from (or did piggyback on) the crash, his role "remains murky."

In our 21st century, "The Secret Weapon" makes the case that the 2008 meltdown "stemmed from a willful act of economic destruction" on a short-selling volume "so large that it could not have been coincidental." Though every clever maneuver imaginable was employed "to hide the identity of the attackers," some "clues and telltale signs went generally unnoticed because hardly anyone has looked for them."

Mr. Freeman's investigation, however, has discovered where the attacks were focused, how they took place and which trading firms were used. 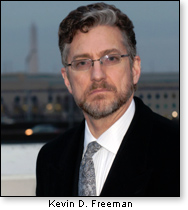 Phase 1: The oil price run-up: Infuriated by the U.S. occupation of Iraq, the Islamic oil-producing states circa 2004 abandoned their commitment to stable oil prices and began trying to maximize their profits. To accomplish that without triggering punishment from the United States, "they could have acted secretly through over-the-counter markets and hedge funds, using speculative tools to push prices up."

Mr. Freeman cites numerous credible information sources, including an analyst who identifies "[c]ombined Salafist-Wahhabi and Muslim Brotherhood circles in the Gulf [that conspired] with consent from the Iranian side" to escalate oil pricing for months "to push the financial crisis in the U.S. over the cliff."

Phase 2: The 2008 bear raids (the illegal practice of attempting to push the prices of a stock lower by taking large short positions and spreading unfavorable rumors about the target firm).

First, there was the March collapse of Bear Stearns, attributed by the SEC chairman to self-fulfilling "market rumors" about the firm's liquidity despite its capital exceeding regulatory standards.

It started when a "mystery figure" made what an analyst called "one of the craziest bets Wall Street has ever seen." Clearly one of the most blatant cases of stock manipulation, according to the consensus. Believed to have been started "by just 10 to 15 people — that's all it took to draw sufficient blood and attract sharks."

Later came the September meltdown of Lehman Brothers. On Sept. 11 (six months since the March attack on Bear Stearns and seven years after the Sept. 11, 2001, attacks) Lehman Brothers was the first of the financial firms on the hit list of new rapid-fire attacks. Wall Street panicked. The credit markets collapsed. Had Treasury not closed down the money accounts to mitigate the alarm, the "entire economy of the United States" would have "collapsed."

Mr. Freeman's analysis, confirmed by others, alleges that two companies were at the heart of this [manipulative] trading, constantly working in concert," overnight becoming "the largest traders in U.S. financial markets."

He identifies those firms but notes that such trades then placed through a company did not "by themselves indicate any wrongdoing by the company." Only after the collapse did the SEC realize the risk of allowing such lack of transparency.

The credible suspects include documented alliances of jihadists and domestic hard leftists. Mr. Freeman is frustrated by indifferent bureaucrats, government and financial institution infiltrators (citing intelligence-connected sources), and politicians who blame each other while ignoring the real threat. 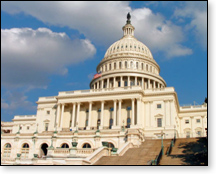 Meanwhile, no action has been taken on a 2010 congressional report that our "10 or so stock exchanges and 50-plus related trading venues are absolutely vulnerable to attacks from traders overseas."

"The Secret Weapon" is an urgent must-read for America. As the author warns, "After cheering the collapse of the U.S. financial system, [our enemies] now stand in commanding position over the U.S. economy, with their boot on our back."