September 6, 2012
This week's Democratic National Convention has trotted out several speakers capable to providing an object lesson in what a second term for Barack Obama in the White House has in store. 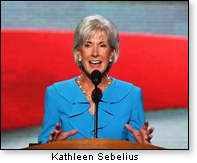 Kathleen Sebelius: The Health and Human Services Secretary once again has validated the Goebbels ironclad rule about effective propaganda: A lie repeated often enough becomes the truth — as widely perceived.

Regarding Obamacare: From the Charlotte podium, Ms. Sebelius said — as has been repeated in Obama's world hundreds of times: If you like your doctor and his practice, "you can keep it."

Tsk! Tsk! Kathleen, you naughty girl! You know that we can keep our physicians only if they are not squeezed out of business by — well, for starters — taking $716 billion out of Medicare so as to feed the monstrous maw of your Obamacare.

Not nice to dip into the disingenuous swamp, Kathleen. We are not bereft of the powers of deduction. I remember your late father-in-law, Keith Sebelius, when he was a (Republican) congressman, and I don't think such tom-foolery on your part would make him proud. 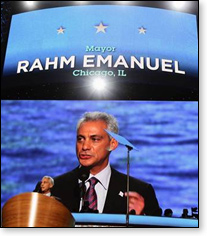 Rahm Emanuel...Now, really Rahm, do you think it's smart for you to show your face at the podium in Charlotte and remind voters that you were at President Obama's side during much of the term before you became mayor of Chicago (infamously dependent on the votes of the dead)?

Wasn't it you who said that Chick-fil-A should not be allowed in the virtuous windy city because the restaurant chain's CEO favors traditional marriage — and that such a point of view is an affront to "Chicago values"?

Rahm, ol' buddy, I'm confused. What are "Chicago values"? Any connection to the city's hundreds of homicides so far this year? Goodness! I prefer to think of "my kind of town, Chicago is" as what it really is — a city where in fact same-sex marriage is actually illegal. That's your city, Rahm. Tell your city attorney to look it up. And if he comes back with the wrong answer, well — will that messenger find a dead fish in his mail? (Which happened to some poor sap who crossed you at one point, Rahm.)

Mr. Emanuel once mused that Democrats should "never let a crisis go waste." (Rahm! Rahm! Get back to the dark corners of Chicago politics, where you belong. You're supposed to be the heavy — not the public relations face of the Democrat Party. If the Republicans don't see you as a crisis that they should not let go to waste, they're missing the glass jaw — again.)

John Burton...Well, now here is a crisis even the GOP can't overlook. We speak here of John Burton, the chairman of the California Democrat Party. The California media inform us that Chairman Burton "has a habit of making outrageous, often profane remarks."

Before the bands at the Time Warner Cable Arena began to whoop it up, the chairman appeared before his state's delegation at a breakfast and denounced "Republican inaccuracies" the previous week in Tampa. In so doing, he also figuratively hauled out the dead carcass of Josef Goebbels (in a different way than did Ms. Sebelius — see above). Mr. Burton accused the GOP of emulating the Goebbels theory of the "big lie." 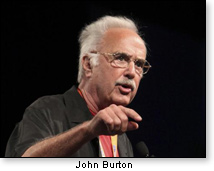 Tut! Tut!, John. Why are you obsessed with long-dead socialists, whether a member of the National Socialist German Workers (Nazi) Party or Harry Bridges, the hard-core communist who ran the International Longshore and Warehouse Union (ILWU)?

Yes, I covered that news conference in D.C. when you were a member of Congress. You were using foul language before open mikes to condemn Nelson Rockefeller, and somehow — I don't recall exactly how it happened — but you wandered off message and gloried in the memory of Harry Bridges, the old commie who had held something of a near-total grip on Hawaii for many years.

John, you need not revive memories of dead socialists. You have plenty of live ones this week in Charlotte. Surely you've noticed.

The Democrats were looking to fire up the troops on their opening night. Instead, Governor Martin O'Malley stepped into the national limelight and nearly put the delegates to sleep.

"10 more minutes of O'Malley and I'll vote for Romney," Tweeted Peter Beinhart to his former colleagues at the liberal New Republic.

They should not be so quick to write him off. Governor O'Malley may lack charismatic flair, but in the Maryland governor's chair, he can be dangerous indeed. He runs the state in lockstep with every cherished left-wing dogma Obama ever contemplated in his darkest moments.

It isn't just that he has raised taxes and fees in Maryland about 20 times in the six years since he assumed the statehouse in Annapolis. The man is touted as the clean-cut "rising star." Really? Governor O'Malley has driven business and jobs from "the Free State" (a designation to be taken with a grain of salt) at the rate he is running the place into the ground.

When he imposed a "millionaire's tax," hundreds of "millionaires" voted with their feet and left the state. That means a net loss of revenue for the treasury and fewer job-providers providing jobs in Maryland. Democrats have a tough time getting that mathematic sequence through their heads. Or maybe they understand it, but think it gets them brownie points from what they view as "the Bourgeoisie."

Beyond that failure of basic economics, the O'Malley administration has tolerated — given a conscious pass to — political corruption that, unless stopped, will soon make the state a miniature carbon copy of the foreign America that President Obama envisions for the entire United States. 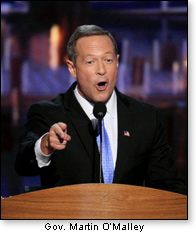 I am indebted to the shoeleather investigative work of James Simpson for his persistent digging to unearth the truth about CASA de Maryland, which has become a regional powerhouse.

This organization, with Governor O'Malley running interference (most often by looking the other way and figuratively winking his approval), has "a history of disregard for the rule of law [and] receives millions of dollars from government at all levels, while winning awards from left-wing foundations and invitations from the White House."

Writing for Accuracy in Media's investigative arm, Simpson reports that "Under Governor Martin O'Malley's sanctuary policies, the state has become an illegal alien magnet. Illegal [aliens] cost Maryland an estimated $1.7 billion per year, which is more than three quarters of the state's $2 billion deficit."

CASA, a "multi-billion dollar operation with influence reaching into the Obama White House...decided early-on to help all comers, including communist guerillas of the Farabundo Marti National Front (FMLN)."

During the 1980s, 25 percent of El Salvador's population, or more than a million people, migrated to the United States. Of these, 240,000 settled in metropolitan Washington, and provided the impetus for CASA's creation.

Law-abiding citizens who take umbrage at thuggish activity by CASA de Maryland have felt the nasty sting of the organization, which seems to enjoy immunity to laws that apply to the rest of us who live in the state.

Its policies include — but are not confined to — the following:

— Instructing on how to avoid police/immigration officials.

— Coaching on what to do if lawfully detained by police just doing the jobs they're paid to do.

— Pushing English as a second language.

— Agitating for driver's licenses for illegals.

In November, Marylanders will vote on a ballot initiative to decide whether to approve in-state (lower) tuition for illegals. (This Marylander proudly signed the petition to get the initiative before the public.) CASA-sanctioned direct confrontation behavior reportedly includes:

— Shadowing of petition locations by paid operatives coordinating by phone.

— According to one petitioner, being spat at...

The case of Paulette Faulkner is instructive. Her job was to ensure compliance with Child Support laws. She had to approve all applications for welfare.

However, Ms. Faulkner's ruling was repeatedly overridden by her O'Malley-backed superior, a Salvadoran. The result: Thousands of public assistance recipients had invalid or non-existent Social Security numbers. But, for conducting herself in accordance with the law, Faulkner was accused of insubordination, all because she would not aid and abet illegal activity.

So she wrote a letter to Governor O'Malley in which she said, "What I am confused about is.....how they can receive State benefits if they are illegal?"

The apparently unconfused governor, who had to know what he was doing, did not deign to respond. Faulkner's superiors, apparently fortified by a governor's wink, retaliated by giving her the chance to resign or be fired. She was denied unemployment benefits and had to declare bankruptcy before finally gaining a job in the private sector.

No state legislator would help her — another indication of the pervasive political corruption in Martin O'Malley's Maryland.

During the stilted clumsy delivery of his speech at this week's Democrat convention, O'Malley ridiculed the Republican ticket's call "to take America back." In his words, "Back to what?" Ah yes, let this "rising star" whose policies are driving the "Free State" toward a cesspool of corruption show the rest of the nation how it is done.

Former President Bill Clinton, who once said of the president, "A few years ago, this guy would be carrying our bags," unclenched his teeth long enough to give the delegates a 50-minute-long endorsement of Mr. Obama's re-election. Some noted Clinton's rant was even longer than his 1988 convention speech when he was practically booed off the stage. Though delegates to the 2012 gathering were enthralled by the ex-president's Republican-bashing, toward the end they started to get restless again. Stem-winder or not, it was time for him to go.

Aaaw, give the guy a break. It used to take him almost that long to define the meaning of the word "is." 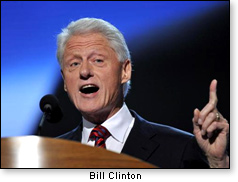 After all, who better to present the party's brave fight against the Republicans' "war on women" than Bill Clinton? No doubt, his presence could have been buttressed by convention speeches featuring Paula Jones, Monica Lewinsky, Kathleen Willey, or Jennifer Flowers. Or how about Juanita Broderick, who credibly accused Mr. Clinton of rape? Maybe she could even include particulars as to how real violence can be an ingredient in the "war on women."

Or since Bill Clinton was on the speaker's roster, perhaps he could have been introduced by such "War on Women" experts as Eliot Spitzer or John Edwards?

Or, how about Antonio Villagairosa, the mayor of Los Angeles? He was there, doing an embarrassingly botched job of ramming through the last-minute revised platform wording on "God." L.A.'s protector of women cheated on is wife while she had thyroid cancer, and the woman he was timing with was the wife of his best friend. Nice guy.

Oh, and they did show a video of Ted Kennedy, albeit without film of a young woman left trapped in a car upside down at the bottom of a lake while he excitedly did contortions on the dry safety of the lawn about how this accident would affect his career.

Some believe that with the nominees decided in the primaries and state conventions well beforehand, today's national political conventions are outmoded and have become nothing but infomercials.

Not necessarily so. While the political conventions have in recent years placed a heavier focus on showmanship than substance, they also gather together the top people of the respective parties for all America to see — often the good and the bad. Fighting over such platform issues as the words "God" and "Jerusalem as Israel's capital" can tell us a lot about the soul of a party soliciting our votes.